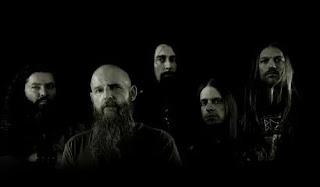 From North are a new Viking Metal band from Sweden. We incorporate medieval instruments into the music. All of the members have a long history from other bands as: Stormhold, Anata, Bleed for me, Irrbloss, Sinisty, Zero Illusions, Years of falling etc etc.

2. You have an album coming out in September, how would you describe the musical sound that is presented on the recording?

We would describe our music as melodic, big, heavy and dynamic backed by well-made backtracks.

3. Your lyrics deal with Norse Paganism and Mythology, can you tell us a little bit more about your interest in this topic?

Everyone in the band has an interest in the Norse history and mythology. We grow up with this stuff, it is a part of who we are. This also goes for Andreas, our sixth member who writes the lyrics.

4. What is the meaning and inspiration behind the name 'From North'?

From North is where we come from. We grow up in this part of the world, so what better name to take...

Our next show will be our best show! Ask us again in a year..

We have our release gig for the upcoming album on the 20th October @Sticky Fingers in Gothenburg. After that we aim for upcoming festivals and more club gigs.

7.The album is going to be released on 'Downfall Records', are you happy with the support that they have given yo so far?

We are definitely happy with Mike and Downfall. He has done a good work so far and looking forward to further collaboration.

8. On a worldwide level how has the feedback been to your music by fans of folk and viking metal?

We are surprised and really happy with all the great feedback so far! It makes you proud seeing fans using the From North logo and commenting on and supporting the music. We get a lot of curiosity on the rest of the album; and if you like the first song “From North” you will not be disappointed in the rest!

We are really happy with our concept! Mixing different styles of metal and medival instruments into the signature From North sound! Next album is already in the making…

Hard to say because of the broad range of our musical taste. We are all metal heads first and foremost but we have influences from many times, places and styles.

Some stuff we like: Growing beard, drinking mead, riding motorcycles, sword fighting, drinking Minttu mixed with Jägermeister = the from North shot (Drink at own risk), and enjoying our beautiful nature; fishing, hiking and camping.

Keep supporting metal in general and From North in particular! Rock on and see you at a stage near you soon!

Posted by OccultBlackMetal at 7:52 PM No comments: 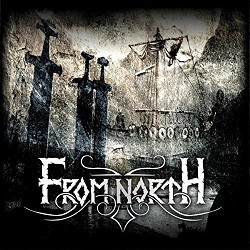 A  very  heavy,  epic  and melodic  sound  starts  off  the  album  along  with  some  folk  instruments  and  after  awhile  aggressive  vocals  are  added  onto  the  recording  and  the  riffs  also  mix  in  a  great  amount  of  traditional  metal  elements  and  clean  singing  is  also  utilized  at  times.

From  North  plays  a  musical style  that  takes  folk,  viking  and  traditional  metal  and  mixes  it  in  with  the  heaviness  of  melodic  black  and  death  metal  to  create  a  sound  of  their  own,  the  production  sounds  very  professional  while  the  lyrics  cover  Norse  Mythology  and  Paganism  themes.

https://www.youtube.com/watch?v=PQSuU0NQD-g&feature=youtu.be
Posted by OccultBlackMetal at 6:18 PM No comments: