1.For those that have never heard of you before, can you tell us a little bit about the band?
TST was established in 2007 with the purpose of creating a variable ensemble dedicated to the esoteric side of the art of noise.

2.Recently you have released an album, how would you describe the musical sound that is presented n the recording?
Michel Chion define the “acusma” as a “sensory phantasm”, consisting of a sound whose true source of emission is invisible. In this way “Luzifers Abschied” it’s a device for “ghostly” manifestation of sound masses.

3.You refer to your music as being 'acousmatic black metal, can you tell us a little bit more about this term?
Extended methods and unortodox practices of "sound fixation" and "sound reproducibility" to design the audible and the inaudible.

4.Can you tell us a little bit more about the concept behind the album and also the opera it is based upon?
It is a sort of transfiguration of the homonym score composed by Karlheinz Stockhausen, originally conceived for male chorus with mass bells, good friday clappers, organ/synth, tam-tam and seven trombones (live or tape), a caged wild black bird and a sack of coconuts.
“This opera cycle revolves around 3 archetype characters, Michael, Eve and Lucifer, and over the 29 hours each of these characters are introduced, come into conflict, face temptation and finally come into union“. – Ed Chang about the opera of Karlheinz Stockhausen –
“Luzifers Abschied” was originally composed on a commission to celebrate the 800th anniversary of St Francis of Assisi, and premiered in 1982 at the Assisi Cathedral where St Francis was baptized.A suggestive link with this sub-theme of the opera, not formally related, it is the hagiographycal essays of the saint, written by Andrea Armati, “Lo stregone di Assisi - Il volto negato di San Francesco” and “Le stimmate dello sciamano”.

5.What is the meaning and inspiration behind the name 'Tele.S.Therion'?
Echemytia.

6.Has the band done any live shows yet? TST have done also rare public sound diffusion, but not to be intended as a music show. A public diffusion for loudspeacker orchestra and audience, is conceived as site-specific artwork, deliberately focused on the psycho-acoustic experience.
If you ask to the right people, someone could explain you better what it mean, unless he too is under the rule of silence.

7.In what part of the world is the band located in?
It is kept secret.

8.On a worldwide level how has the feedback been to your music by fans of black metal and other dark or underground forms of music?
“You may have immersed yourself in the blackest of metals for decades. You may feel you have embraced the sonic distillation of evil. You may have walked the deepest catacombs of black metal’s kingdom of fire and shadows, searching out the harshest creations by the most intimidating of the face painted disciples of darkness. Not one moment of all those years, searching in the black, has prepared you for Luzifers Abschied “ [...] “To listen to this album is to walk a path you have never taken before, to see sights you have never seen before, to step over the threshold” – ImperativePR -

9.Where do you see the band heading into musically during the future?
Coming to know is a process of dynamic adaptation towards viable interpretations of experience. Act always so as to increase the total number of choices.

10.What are some of the bands or musical styles that have had an influence on your music and also what are you listening to nowadays?
There is a pragmatic relation with the studies of Luigi Russolo (a depth study about this author is the Luciano Chessa’s assay “Luigi Russolo Futurist - Noise, Visual Arts, and the Occult”), Edgard Varese and with many authors involved in the cultural framework called “last avantgarde” (circa 1950 – 1980), including: concrete, aniconic and non-objective visual artists, conceptual artists, and in the aural field, there are relations with the praxis of the electroacoustic and atonal music, sound art, non-idiomatic improvisation, metaphonic researches (including spontanous music and direct voices phenomenon), the first era of black, dark and doom metal (searching for the roots of these terms, for their sonic phenomenas, their thought-forms, before they became a music genre).

11.How would you describe your views on Occultism?
The acousmatic practices dealt into TST are focused on the mysterical degrees of the art of listening; the art of silence.

12.Before we wrap up this interview, do you have any final words or thoughts?
www.telestherion.com
Posted by OccultBlackMetal at 11:53 AM No comments: 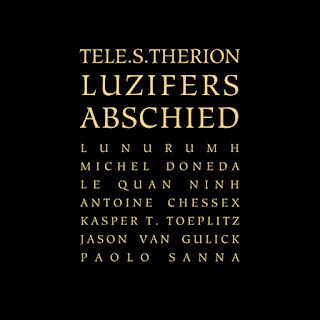 Avant  garde  sounds  start  off  the  album  and  they  also  add  in  a  touch  of  underground classical  music  along  with  some  touches  of  noise  and  experimental  and  whispered  ritualistic  chants  can  also  be  heard  in  the  background  at  times  and  most  of  the  tracks  are  very  long  and  epic  in length.

After  awhile  the  chants  start  utilize  more  of  a  melodic  tone  along  with  a  very  grim  black  metal  edge  and  stringed  instruments  are  also  utilized  at  times  and  after  awhile   drum  beats  are  added  onto  the  recording  along  with  some  evil  screams  and  demonic  voices  and  at  times  synths  and  saxophones  are  added  into  some  parts  of  the  music  and  when  percussion  is  utilized  it  gives  the  music  more  of  a  ritualistic  and  shamanistic  feeling.

Tele.S.Therion  plays  a  musical  style  that  takes  black  metal  without  the  electric  guitars  and  mixes  it  with  avant  garde  and  experimental  to  create  something  very  original,  the  production  sounds  very  dark  while  the  lyrics  are  based  upon  the  fourth  act  of  Karlheinz  Stockhausen's  opera  "Samstung  aus  Licht  (Saturday  From  Light).

https://www.youtube.com/watch?v=JceekdNS29o
Posted by OccultBlackMetal at 8:06 PM No comments: