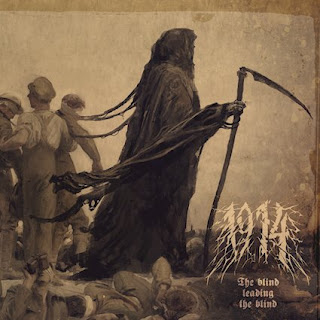 1914  creates  another  recording  that  remains  true  to  their  blackened  mixture  of  sludge,  doom  and  death  metal,  the  production  sounds  very  professional  while  the  lyrics  cover  World  War 1  themes.

Posted by OccultBlackMetal at 1:15 PM No comments:

Hi. Right now we planned some gig in Ukraine and EU, we`re announced at the biggest Baltic extreme metal festival - Kilkim Žaibu this summer and signed with big EU booking agency (they will announce us soon) and together we will plan our tour in Europe
And, of course, we’re creating a new songs for upcoming album. Five out of seven planned - almost ready. So I hope we release our second LP at this fall.
Oh, we have found a new drummer, and he is great.


2.How would you describe the musical sound of the current music?

Less metal - more despair and pain)) It slowed down, became monolithic and angrier. I think that new songs received a little bit more of death metal and sludge influence. And it`s heavy as all hell
And it’s neither about politics, nor about propaganda or other bullshit stuff – it’s just war, trenches, fear, hopelessness and endless death around of you

3.With the song lyrics and band name the concept is about World War I, can you tell us a little bit more about your interest in this war?

Over 10 years ago I went into war archaeology, actually WW1 archeology.  I love this war, this history, uniforms, weapons, armament, stories about battles, and the fate of soldiers. I am a real fan of Great war. Here in Ukraine there were many battles of Great War – Brusilov`s offensive, Carpathian winter operation, Galician battle.
Therefore, I dug up dead soldiers - skeleton, with uniform, weapon, ammo, with all the stuff and wrote songs about their fate, about their silent death. Feelings. His fear.
I’ve always been inspired by this theme. I love films, books, stories, artifacts of this war.
When you dig up a soldier, who died here 100 years ago and laid in the mud – it is a strange feeling. When you look at these bones that were human once, with all human’s stuff - love, feelings, hope, maybe stamp collection, whose parents were waiting at home, you think – why and for what did he die? I had no answer. But all these things inspire me.

4.Recently Mazzar released your 2015 album and 2016 ep as a compilation, what are your thoughts on the final product?

It`s was a really great idea to collaborate with Mazzar and I hope we will keep it going for a long time. They did a huge work to promote us, help us with some gigs, created an awesome merch and actually a fucking great digipack with all our stuff.
Awesome art, awesome product interesting for fans (I hope so)
So I`m really glad that we found each other

Actually the best shows I thinks were gigs in Uzhgorod and Zaxid fest. First – good one oldschool gig in underground club, with a lot of fans, stagediving, slam and all this stuff, Zaxid – biggest UA festival with all sort of music, although we looked a bit weird there, but we found many new fans and played on a big stage with great sound.
About performance – we use a lot of things to create an atmosphere of Great war – sounds of war, hymn samples, sounds of machineguns, etc., speeches between songs about this part of history, old and rare video footage from WW1, use a real working Mosin–Nagant rifle as custom microphone stand. And we do it great, interesting, with expression.

Yeah I described it in a first question)


7.Recently you did a cover of Nirvana's "Something In The Way", what was the decision behind doing your own version of this song?

When I was teenager I loved Nirvana and this song. For many peoples this song boring (as a Nirvana)). But for me – it’s about fate, what you cannot change. Maybe later – if there will be any later. So when I read books about battle of Somme – in text I found some soldiers words about tanks (don’t remember exactly, but something like this) – We saw it and it was hell, big, loud, with fire and smoke, something in the way, maybe death. And I remembered it – something in the way, death, battle of Somme. After years it came up from my memory and I said to guys – hey common let’s try do this song like our version about battle of Somme. So we did.


8.On a worldwide level how has the feedback been to your music by fans of black, doom and death metal?

I didn't expect such interest from all around the world to our band. A lot of people write us from France, Belguim, USA, Germany about our music with thanks, with greetings.
Album has over two hundreds reviews out of all world so far – from Australia, Iceland, from Brazil, Poland, Germany, Greece, Norway, from Russia and USA and so on. Many thanks from guys that in theme of Historical reenactment, and even French historian, who writes about Great war in metal music, wrote about us and used our texts. It`s awesome I think.

My goal is to tell the whole world about Great War, to all metal heads, to all military fans. Tell this part of history to all who can hear it.
How can we do that?
Of course at big festivals in EU and maybe USA, good promotion, via tours and gigs as much as we can, collaboration with big labels like Nuclear blast, Peaceville or Metal blade. And, of course – good music and stories from us. From all dead soldiers of Great War


10.What are some of the bands or musical styles that have had an influence on your newer music and also what are you listening to nowadays?

About music that I listen to and about influence – it will be a long list from Japanese noise to grindcore, from true BM to old school rap, from hardcore punk to industrial, electronic, death, doom, sludge, stoner, post-rock. Actually, I am a big fan of Misfits, Exploited, Paradise lost, Obituary, Asphyx, Merzbow, Einstürzende Neubauten, Black flag and all oldschool hardcore punk, death, true black metal from early 90`s and noise\industrial from 70-80`s. I fucking love japan noise and some british and scandinavian bands like Nordvargr, Dead Voices On Air, Cremation Lily. About now - interesting music for me – atmospheric black or Cascadian post black, some electronic bands like Gost, Carpenter Brut or Zombie Hyperdrive. A lot of awesome music we can have today and it`s great.

All simple, first of all for me – books. I am a fan of anthropology, evolutionary biology, paleoanthropology and paleogenetics. So I collected a some good works in this themes. I am a fan of Sci-fi (Asimov, Clarke, Zelazny, Anderson, Simak, Harrison, Bester, Heinlein etc) and have all their books. And of course war memoirs and history books. I fucking love history))
I’m collecting, of course, war archeology and military items, I have a lot of artifacts from Great War.
In addition, aquariums. Actually all our musicians have them and loving it. 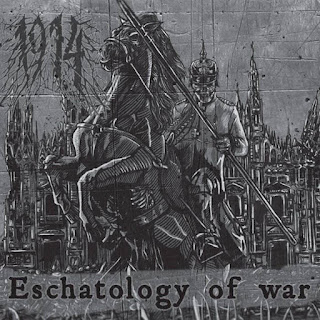 https://x1914x.bandcamp.com/
Posted by OccultBlackMetal at 7:47 PM No comments: