Nordic Frost began as a concept in 2006, I had wanted to start a black metal band for some time and had a plethora of talented musicians to work with. What ended up happening instead was a death metal project called Etched In Stone, which was active for 11 years. In 2015, while on tour with Etched In Stone, I began writing what would become the debut Nordic Frost EP and the rest is history!

Ov Blasphemy And Other Rites is different from it predecessors in multiple aspects aside from the obvious lyrical themes, but what stands out the most to me personally are the drums were placed in the much more capable hands of Randy Abbott this time around, and the orchestral parts were crafted more to fit the tone of the songs instead of simply filling the space between tracks.

3.Some of your lyrics cover witchcraft and the occult, can you tell us a little bit more about your interest in these subjects?

I’ve had a vested interest in the occult and in ancient pagan beliefs ever since I was young. Being raised in the Christian church can tend to have that effect on free-thinking folk.

4.What are some of the other lyrical topics and subjects you have explored so far with your music?

Each release has been conceptually themed. Ov Blasphemy is primarily about witchcraft or ancient pagan rituals and retaliation against the early church for the capital punishment of heretics. Jeg Er Blitt Død had themes of vampirism woven throughout, and the self-titled EP was more of a sacrilegious offering.

5.What is the meaning and inspiration behind the name 'Nordic Frost'?

Nordic Frost was the name I landed on 13 years ago when I was first trying to get this project off the ground. The icy nature of the name is parallel to the cold-natured lyrics. It’s formidable and vehemently anti-religious.

The cover artwork depicts a blood sacrifice ritual in a classical portrait style. I wanted to go above and beyond what I had done for previous releases and took extra time piecing this one together.

7.On this album you recorded everything by yourself but have worked with a drummer in the past, are you open to working with other musicians again or do you prefer to work solo?

I really love the control of the solo aspect, though it’s nice to have other musicians input as well. That’s a tough call, but the goal for this project is to begin playing live as soon as the right members are in-place. As for the drums on this record, everything I originally had in place was scrapped and replaced with Randy Abbot’s awesome work.

8.The new album was released on 'Rebel Pyro Musick', can you tell us a little bit more about this label?

9.On a worldwide level how has the reaction been to your newer music by fans of symphonic black metal?

There has been a fair amount of coverage for it being such a small project, it’s being received positively around the globe from what I can tell. I actually got a message from a new fan in Syria a couple day’s ago saying that he couldn’t stop listening to it and it’s those kind of interactions that really reaffirm to me why I do this. There’s no better feeling than having someone you don’t know, half a world away, go out of their way to let you know they appreciate your art!

10.Where do you see yourself heading into as a musician during the future?

Preforming Nordic Frost material on stages all over the globe, hopefully! Starting with the west coast of the US, as that is home-base, then depending on reception branching out to national and then international stages.

Bands that really shaped who I am as a musician are many, but some major players are: Dimmu Borgir, Dark Funeral, Behemoth, Opeth, Tool, Cradle Of Filth, and Deicide.

I like to cook, I like to take my family camping and on other trips. I run a graphic design company, and I work as a A/V Tech. A lot of irons in a lot of fires, haha!

I just want to say thank you for giving me this platform, and to the readers and listeners: Thank you! Posted by OccultBlackMetal at 12:02 AM No comments: 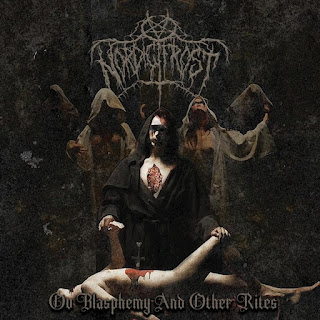