1. Can you tell us a little bit about your project for those that have never heard you before

i started derelict sermon in early 2006.i was pissed off just being a drummer in bands for the last 20 years apart from my lone power electronics project survivalist,(the long deleted for the cold blooded cdr was released in a very limited pressing by sadisque records in 1999.the cdr was recorded in 1996/1997)and ethersuite(a downbeat project with leoncia flynn,2 archangels in the winds of nihilism cd was released in 2004)which both was pretty much me solo and wanted to have complete control over my music/art direction etc.at first it was a blend of doom and a bit of black metal and now has grown into a very different beast.

2. What is going on with the project these days?

derelict sermon has so far released 3 albums on my label bleakscape.selftitled debut album(2006)wardycurse(2008) and the murderous altitude(2010)im currently working on a 4th album.maybe released this year by more than likely in 2011.


3. What is the meaning behind the bands name?

the name derelict sermon was coined in 2004 by myself and a close friend.we was talking about an old derelict church around where we live.sermon just kind of fit.the name should not be taken out of context i.e.a crumbling church falling down around a sermon spoke out etc!the name has a secret deeper meaning than that. its has an invisible meaning to me when i choose for it to have.


4. Do you have any other projects or bands besides this one, if so who are they and what style of music do they play?

i have been in many bands over the past 20 years,longcoldstare/harmony as one/scalplock etc.at the moment im just doing derelict sermon.


5. Have you considered getting a full line up or is this going to remain a solo project?

i have never been into doing ds live.it would lose all of its magic for me i think.i have toyed with the idea but im so into it being just studio based.the new stuff im working on would be impossible to pull off live.im into recording a track then moving on never to go back.progression would be zero if i went back and played say the 1st 2 albums.it would be so fuckin dull.i love to listen to them but not repeat them.


6. How would you describe your musical progress over the years and what direction do you see the band heading into on future releases?

my music as derelict sermon has no doubt progressed since the 1st album.form recording with my friend indian singer lopa kothari on the last 2 albums to the jagged time structures and general atmosphere on the new album.i think the 4th album will be the most out there and challenging i have ever done with derelict sermon.the music is much more orchestrated than ever,even improv and spectral musics seeping in. im working with lopa kothari again on this new one and another very talented lady and dear friend vera brozzoni.


7. Out of all the albums you have recorded so far which one are you the most satisfied with?

i love all 3!but would pick the murderous alttude as my current fav.its all the stuff i built up for it over the 2 years i took to record.its has an early mastodon/orthrealm influence in parts.the last track on the album leoncia is maybe a clue to were im heading next.maybe,but im thinking broader than that even.


8. How has the reception been so far to your music by extreme music fans worldwide?

so far its been really good.even getting a great review in kerrang!!!fuckin mad!even they seemed to like my sickminded music.nice!aot of people the world over have and continue to give me great fuckin reactions.im very grateful for that.its nice when people get into what your doing.


9. What are some bands or music styles that have influenced your music and what are you listening to nowadays?


10. How would you describe the lyrical content of the music?

thats the hardest question.my lyrics have and will always be very private to me.all you need to know is they are very very extreme.whitehouse/sutcliffe jugend would be near places i would mine but i have a complete separate violence/sadism etc.alot of females in my titles/lyrics are ladies i have known or still know.they all have a history of being very dangerous people indeed.people you would not wanna fuck with.

11. What made you decide on the cover art that you used for the new album?

in one of my fav films called the baader meinhoff complex their is an assassination/kidnap scene and kind of very loosely based it on that.an american cartoonist called bodie chewning did it for me.i wanted to cover to be real but you know i dont want to go away for murder just for a fuckin cover!!!no i was gonna get models to do ot but thought it may be a too cheesy witchfinder general type of cover.i am really pleased the way it turned out.it looks fuckin great.


12. Does Satanism or Occultism play any role in your music or your life?

not really.not in my music anyway.i have been into austin osman spare for many years.in my life maybe there is some influence/inspiration form great people like him. anton la vey i used to really like.his take on things was very important to back in the mid to late 1990's.


13. What are some of your interests outside of music?

i work,see close friends.got to a few gigs.draw when i get time.read as well.i love films as well.and doctor who has been a big mover with me for ages now.you cant beat it!!!some of my fav fims are the mackintosh man/blue rita/thunderball/who dares wins/the honeymoon killers/the elephant man/saturday night and sunday morning/carrie/halloween and the wicker man.

just thanks for the support and look out for the new album and the 4th album.i hope this project goes on for a while.and thanks for the interview.its a scoop dude as its derelict sermons first interview!!!you heard it here first people!

Posted by OccultBlackMetal at 3:57 PM No comments: 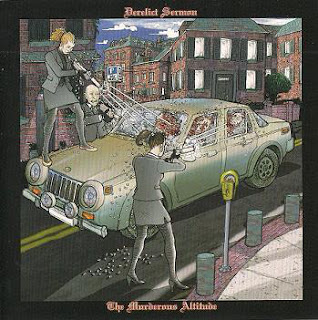 Derelict Sermon are a one man band from Great Britain that plays a style of extreme music that combines sludge, doom, black metal and noise and this is a review of the 2010 album "The Merderous Altide" which was released by Bleakscape.

Drums are mostly slow with some beats that get kind of fast at times with that that much when it comes to blasting, while the bass playing is very primal and sludgy with a dark distorted tone, and on the last song there were some strings being used to gave the music  a funeral doom/black metal feel mixed in with some ambient sounding noises that contained a lot of feedback.

Guitars are tuned down very low and have a dark and doomy sound with some occasional fast riffs that have a crust punk feel while the vocals seem to be a mixture of black metal screams mixed with Buzzoven, Grief and Eyehategod type of vocals and on one song there was some clean vocals that had a very sinister edge to them with the last song on the album having some female vocals that sounded New Age.

Production on this recording which was recorded at Bonafide during August of 2009 and Engineered as well as mixed by Brian Boganovic sounds really dark, raw and primal and all of the instruments and vocals sound very heavy, while the Front Cover Illustration which was dome by Bodie Chewing has a couple of women and an old man shooting guns through a car window and killing everybody in it, as for the song titles they cover murder topics and seem to have a good sense of humor.

In my opinion this is a good album and it brings back memories of a lot of the doom/sludge/grind/crust warehouse shows that I use to go to all the time in the mid 90's and early 2000's before everything got trendy. If you are a fan of sludgy doom metal with a black metal edge I would advise you to buy this album, you can contact the bandwww.myspace.com/derelictsermon ande www.derelictsermon777@gmail.com

Posted by OccultBlackMetal at 5:19 PM No comments: