1.Can you give us an update on what has been going on with the band since the recording and release of the new ep?

I've been laying down the foundations for a forthcoming Ur Draugr full-length. Writing started almost as soon as the EP was finished last year, so we're quite some ways along already.

2.In January you had released a new ep, how would you describe the musical sound that is presented on the recording?

Ur Draugr started very much as an attempt to capitalise on the textural and rhythmic diversity of progressive music while retaining the brutality and dark sensibilities of black and death metal. I think the record is – at its core – a marriage of those two principals, though not without the occasional foray into drone, sludge, or and folk.

'The Wretched Ascetic' is built very much around the abandonment of organised religion and the philosophical path toward asceticism (and all of the ramifications and rewards held therein).

4.What is the meaning and inspiration behind the name 'Ur Draugr'?

Ur Draugr's name was very much inspired by my fascination with ancient religions and cultures. 'Ur' is a Proto-Germanic prefix that indicates a state of primitivity or primality. 'Draugr' is derived from the Proto-Germanic word 'Draugaz', meaning mirage or deception, but used to describe a ghost or restless spirit in Old Norse.

Ur Draugr is, at present, a studio project.

It's definitely a possibility, but our energies are better spent writing and recording for the moment.

We're currently not able to discuss this at length. Suffice it to say, there may be some news on the horizon.

Overwhelmingly positive. We've been truly honoured and humbled by the reception, and I can't wait to unveil what will come next.

9.What is going on with some of the other musical projects or bands these days that are some of the band members are a part off?

Dan Grainger's infamous outfit Wardaemonic (for which he performs drums and vocals) is preparing for the release of their fourth cd 'Obsequuium' in March, which by all accounts is shaping up to be a monstrous success.

Otherwise, I'm working on a long-term ambient/drone project that has been in development for almost twelve months, and should see the light of day before the year's end (with any luck).

10.When can we expect a full length album and also where do you see the band heading into musically during the future?

We're aiming for a 2015 release. At this stage – given how the material is developing – I'm inclined to say that this full-length will be a touch different from the EP, though certainly still rooted firmly in a blackened death metal ethos.

All of us are broad music-listeners, and frequent jazz, folk, rock, classical, and many other genres besides. I've personally spent the last few months alternating between Gorgoroth, Blut Aus Nord, Sting, and Stevie Wonder.

I'm an avid reader and writer, and a documentary enthusiast (to say the least), but I find that music rarely leaves much time for other interests.

Nothing that seems particularly pertinent! Many thanks to yourself and to anyone else out there for listening, and be sure to check out Wardaemonic's 'Obsequuium' when it arrives.

Posted by OccultBlackMetal at 12:38 AM No comments: 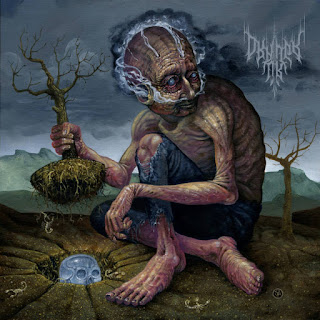 Ur  Draugr  plays  a  style  of  black/death  metal  that  is  very  dark,  melodic  and  progressive  sounding  along  with  all  of  the  band  members  displaying  a  great  amount  of  talent  and  skill  as  musicians,  the  production  sound s very  dark  and  heavy  while  the  lyrics  cover  dark  and  metaphysical  themes.

Posted by OccultBlackMetal at 9:48 PM No comments: