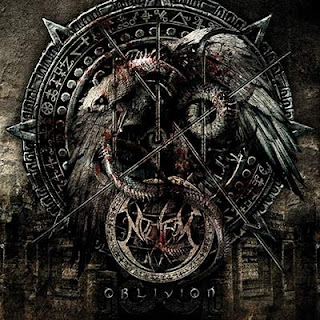 Noctem are a band from Spain that plays a very heavy and brutal form of black metal that also combines brutal death and thrash metal influences into the music and this is a review of their 2011 album "Oblivion" which was released by Rising Records.

Drums range from slow, mid paced to fast drumming with a lot of brutal sounding blast beats being thrown into the music as well as a brief use of shamanistic style tribal drumming being used, while the bass playing has a very dark tone with riffs that follow the riffing that is coming out of the guitars and at times they have a very powerful sound to them, as for the synths they are only used briefly and bring a very dark and atmospheric sound to them as well as an avant garde/experimental edge to the last song.

Rhythm guitars range from slow, mid paced to fast riffs that combine the most brutal elements of black, thrash and death metal together with some dark sounding melodies and technical parts to create a sound of their own mixed in with a brief use of soft and clean playing, while the lead guitars are very technical and melodic sounding guitar solos and leads.

Vocals are mostly high pitched black metal screams mixed in with some deep death metal growls as well as the type of growling you would except from more mainstream bands, while the lyrics cover Mythology, Occultism, dark and anti religion themes, as for the production it has a very strong, powerful, heavy and professional sound to it.

In my opinion Noctem are a very great an original sounding brutal black metal band that also combines melody, thrash, death and technical metal together and if you are a fan of this style, you should check out this band. RECOMMENDED TRACKS INCLUDE "The Arrival Of The False Gods" "Invictus" "Sons Of Hun-Vucb" and "Oblivion". RECOMMENDED BUY.

1. Can you tell us a little about about the project Black Crow King for those that have never heard of you before?
It is a solo project that came into existence mid 2011 as a means for me to explore very personal beliefs, interests and emotions. At the time I was making really harsh hate filled rage fuelled extreme electronic music that was not suitable to explore some of my other interests so Black Crow King came into existence.

2. How would you describe your musical sound?
The bastard offspring of Extreme Doom, Death Industrial, Black Metal and Dark Ambient. Think along the lines of Khanate meets Gnaw Their Tongues with some harsh electronics and black atmospherics thrown in for good measure

3. What are some of the lyrical topics and subjects that you explore with the music?
On 'To Pay The Debt Of Nature' there is a central theme to the album, namely death but each song also explores it's own separate theme. 'I, Crow' is an exploration and homage to crows in the role they play in the natural the supernatural and occult worlds. 'The Shadow Falls' is a philosophic discussion on nihilism, misanthropy and death. In 'Vengeance' I think the title says as much as you need to know, 'Grotesque Existence' explores the grotesque nature of humanity and how the one is neglible to the many and how we as a race have become Grotesque i.e. no longer a part of the natural world and nature. 'Crowbait' is pure misanthropy and malevolence and the final track 'Excarnation Ritual' explores my interest in the funeral practice of excarnation, this is an ancient practice linked with pagan beliefs in which the deceased persons corpse was left out in the open, most commonly on a platform, as an offering to nature in the form of crows and other carrion feeding birds. The crows / vultures acted as carriers for the soul to be taken to the afterlife.

4. What is the meaning and inspiration behind the name Black Crow King?
I have a deep seated interest in crows and there supernatural role, they are viewed as the bringers and companions of death in virtually every culture, so to me the king of the crows would be death himself and that is what inspired the name. There is also a character that features in the lyrics of some of my songs that I call Crowlord - this too is a personification of death. Incidentally the album title itself is a euphemism for death.

5. The album came out on badGod music, how do you feel they have helped with spreading and supporting your music so far?
badGod Music has been wonderful, Dave has supported me from the day he first heard Black Crow King and has been tireless in his efforts to promote the band however he is able to, he does it for the love of the music and supports the bands 100%. Any artist would be lucky to be signed by the label.

6. Do you have any other musical projects besides Black Crow King?
Yes but that is a conversation for another day.

7. What direction do you see your music heading into on future releases?
I have already started work on the follow up album, the songs will still be long but for this release will follow a more structured sound and I am using a heavier guitar sound but all the other experimental elements will still remain - BCK will never be 'another run of the mill doom band', if I ever feel that is happening I will scrap the project.

8. What are some bands or musical styles that have inflenced your music?
Khanate, Electric Wizard, Burning Witch, Eagle Twin, Gnaw Their Tongues, Anaal Nathrakh, Prurient, Whitehouse, MZ.412 and N.D.E

9. Does Satanism or Occultism play any role in your music?
Satanism does not play any role but the occult does. My interests lie in the more primal forms of paganism and the primal deities.

10. Any final words or thoughts before we wrap up this interview?
Thank you for your great review and for the opportunity to do this interview and I hope that the more adventurous people will go out and buy and enjoy the album in all it's ugly depraved beauty. 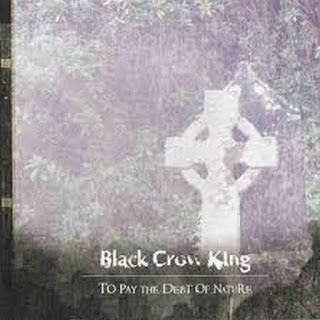 Black Crow King are a band from an unknown location that plays a mixture of black metal, doom metal, sludge and experimental music and this is a review of their 2012 album "TO Pay The Debt Of Nature" which was released by badGod Music.

Drum programming when it is utilized range from slow to mid paced beats that are not included on every song, while the bass playing has a very strong and powerful sound with slow doom/sludge riffs that dominate throughout the recording, as for the synths when they are utilized they have a very dark ambient and evil sound to them with some harsh noise effects being thrown in at times.

Rhythm guitars range from slow to mid paced that combine black metal, doom metal and sludge together with a great amount of heavy distortion while the lead guitars when they are utilized are very distorted and noisy sounding guitar solos and leads.

Vocals are mostly high pitched black metal screams mixed in with some deep blackened growls, while the lyrics cover dark and occult themes, as for the production it has a very dark, raw and primitive sound to it.

In my opinion Black Crow King are a very great sounding black metal, doom, sludge, experimental/noise hybrid band and if you are a fan of this style, you should check out this band. RECOMMENDED TRACKS INCLUDE "The Shadow Falls" "Grotesque Existence" and "Excarnation Ritual". RECOMMENDED BUY.