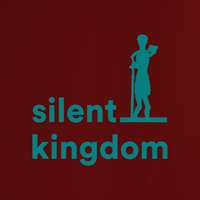 Amir: Hi! The band is currently preparing for some live gigs...Some internal problems within the band are slowing us down but hopefully we will hit the stage very soon.

Amir: Well, I would call it progressive, folk rock but it is really hard to label the music we are doing. I was always a fan of Bosnian prog-rock band Indexi and I wanted somehow to pay my musical due to them. Also, I was always a progressive music fan and loved bands such as Mahavishnu Orchestra, Al Di Meola, Genesis, Chick Corea etc. and that was the music I've been listening to for the last 20 years or so. Silent Kingdom had acoustic songs since the beginning and our EP from 2002 "Whispering nights and majestic winds" is completely acoustic with clean vocals. Right after we recorded "In Search of Eternity" I thought I did everything I could within prog/folk/black metal style we were doing for decade and a half. I didn't want to repeat myself because I love art and the easiest thing for me would be to make something similar to last three records we did. On the other hand these new songs just started to pour out of me and after I wrote the first song I knew where to go next. I thought that this album will give me and the band something to hold on to in the future. It really gave us a musical future. We can develop this style the way we want and even combine it with some of our previous influences...

3.Your earlier material was in more of a black/death metal direction but the music on the new album is in more of a dark and progressive rock style, what was the decision behind the musical change?

Amir: The change of the musical direction wasn't intentional, it just happened. The first song that I wrote is actually the first track on the album, "San o snu" (The dream about the dream). I remember the moment I wrote the first verse along with the music, I thought "this is something really interesting" because I didn't write anything in my mother tongue since "Reflections of fire" album intros. Than the whole album concept opened in front of me and I just started writing. In it's essence, this album is conceptual with the same idea behind all songs. The true art can not be forced and controlled in my opinion so when the spark happens you just have to follow it.

Amir: The concept is basically the same: love, hate, fear of oblivion, messages from the past and their meaning in these modern times. Lyrically they are told in different style. At least I like to think they are different. People are born with love yet at the same time hate seems to consume everything that people build. It seems that mountain of love can be destroyed easily with one showel of hate. That is something that is fascinating to me and I tried to explain it to myself first through these lyrics. I don't know if I will ever be able to understand it or if I will ever be able to tell that story in full.

5.What is the meaning and inspiration behind the name 'Silent Kingdom'?

Amir: Sead Tafro and I formed the band somewhere in the beginning of 1999 although we had an idea in 1998 and it's funny how clearly I remember the moment when we gave the name to the band. We were talking about where we live, about the history of Bosnia. The more we were talking about those topics the more the picture was forming in my mind and I remember that at one point I said "this is the silent kingdom". The country exists for almost a millennium but nobody outside knows anything about it.

Amir: Silent Kingdom was never a live band in the full sense. In these (almost) 20 years we had only 20 or so gigs. In the beginning we had problems finding the musicians in Sarajevo. I must remind that it was the post-war period, just three and a half years after the war and a lot of people fled from the city in that period so it was really hard to find somebody who shares our view of music. Plus black metal was literally unknown here. Somewhere in 2002 we met Edin who was a guitar player but since we couldn't find the bassist he took over that duty. As a three piece we started to rehearse and we even had couple of gigs but we weren't satisfied so we decided to stop with the live gigs until we could find more members, primarily bassist and keyboardist. Later on Edin's brother Emir joined and Amir Cefo came year or so later. The music that we play is very demanding, technically and playing vise so we need a lot of rehearsals. We are all busy with our daily jobs so it takes a lot of talking to get together in a rehearsal room. There are couple of gigs that were really great like the one we had in Sarajevo at the "Path to oblivion" release party or headlining gig we had in Bern, Switzerland.

Amir: As I allready wrote, currently we are preparing for some live gigs. We do have some internal problems but I think that we will overcome those and play an album release gig in March.

8.How have your older fans reacted to the musical style of the new album?

Amir: Untill now I only heard the words of praise from majority of old and the new fans. But on the other hand I know that some of our fans do not like this change and I completely understand that. The change was really necessary and if we didn't record this album I'm pretty much sure that the band would split. So I would say that the fans should give this album a chance.

Amir: Well we are all busy with our day to day lives that we hardly have time for some other projects.

Amir: I will definitely try to explore the progressive side of our current musical direction and I must say that we do not exclude the distortion or some heavier sounding songs because there is a room for something like that. "Where Secrets Meet" was composed between September 2014 and February 2016. We entered the studio on 30th of August 2016 but the album was released almost a year later. So there is a gap of more than two years from the moment the music is composed and in that period I tried to see what will happen. I must say that I already wrote some new music that sounds more than promissing! I have concept of the album done and now I need to write the songs. Hopefully we will have the new album ready on our 20th anniversary next year. I just have to mention that as the time passes and as I'm getting older my expectations music vise are getting higher and higher so it is really difficult for me at this point to write a song that I'm partially satisfied with. It was always like that but now the stake is so much higher than before.

11.What are some of the bands or musical styles that have had an influence on your newer music and also what are you listening to nowadays/

Amir: The bands that I've been always listening to, Gentle Giant, Genesis, Indexi, Smak, Black Sabbath, Deep Purple, Whitesnake, Rainbow etc. I never started buying CD's and all I have at home is a turntable with selected amount of records that are in my possession for more than 20 years and that is the only music I listen to so naturally I get inspired by them all the time.

Amir: I'm a professional Graphic Designer for 20 years now and that is my main occupation. I love to read historical books but I also love to read Stephen King and Clive Barker.
I also have a wife and two beautiful daughters and I try to spend as much time with them as I can. And there are the comics :) I draw comics and have released 5 or 6 graphic novels.

Amir: Thanks for this interesting interview! Keep up the good work on promoting metal because the world is turning to stupid shit hole and we really need something to hold on to!
Cheers to all of our fans!

Posted by OccultBlackMetal at 6:07 PM No comments: On  this  recording  Silent  Kingdom  move  way  from  a  melodic  black/death metal  direction  and  goes  into  more  of  a  dark  progressive  rock  style,  the  production  sounds  very  professional  while  the  lyrics  are  written  in  a  mixture  of  English  and  Bosnian  and  cover  darkness, fear  and  oblivion  themes.