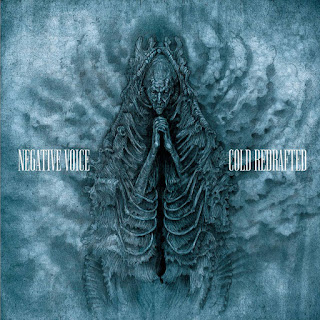 Clean  yet  distorted  playing  starts  off  the  album  along  with  some  drum  beats  and  melodic  guitar  leads  making  their presence  known  a  few  seconds  later  which  also  leads  up  to  a  heavier  musical  direction  and  you  can  also  hear  all  of  the  musical  instruments  that  are  present  on  this  recording  and  whispers  can  also  be  heard  briefly.

Negative  Voice  retain  some  of  the  melodic  black/death  elements  of  the  last  album  while  also focusing  more  on  the  progressive,  goth  and  doom  metal  side  this  time  around,  the  production  sounds  very  professional  while  the  lyrics  cover  oblivion  and  desolation  themes.


Posted by OccultBlackMetal at 10:10 AM No comments:

Can you give us an update on what is going on with the band these days?
The band is currently actively engaged in the creation of the material for the second album, which we plan to record in the studio at the end of this year. The new album is likely to be very different from the debut album in stylistics and sound. The whole band now are involved in writing the new material; everyone brings ideas and influences the final result. After recording a new album we plan to continue an active concert schedule.

Recently you have released a new album, can you tell us a little bit more about the musical direction of the new recording and also how does it differ from your past recordings?
Infinite Dissonance is our debut album, and it is the aim and the logical culmination of a long enough, more than a decade years evolution of Negative Voice`s ideas. During this period band recorded several inconspicuous demo-tapes, went on long pauses, changed the line-up, the band conception and style of music played. So Infinite Dissonance as our first creation is some kind of a milestone. Stylistically, the album has included elements of several styles of metal.

The band was broken up for a few years, what was the cause of the split and also the decision to reform?
In fact the band has never ceased to exist. In 2004 there was a pause associated with location of band`s members (at that time - Andrew and Yaroslav) in different cities, and with their participation in other musical projects. In 2010 it was decided to continue the activities of the band and to record a new demo tape with a few songs.

Can you tell us a little bit about the lyrical topics and subjects the band explores with the music?
All themes of the lyrics on the Infinite Dissonance could be characterized by the phrase "intentional self-destruction of the individual in modern human society." All lyrics are filled with depression mood, sadness, thoughts of return to the past, mental anguish, mental degradation and madness. The last song leaves hope for the life salvation outside of society by refraining from the madding crowd.

The band started out as «Valhalla» what was the decision behind the name change and also the meaning and inspiration behind the name «Negative Voice».
Valhalla name was coined in late 1999 for the just formed new band. At that time we had influence of pagan doctrines on our ideology - both in lyrics and music. A little later, with the change of the course the name was changed to more neutral. Meaning of the words Negative Voice for us is "vote against" - the ability to speak out against the prevailing attitudes, and the canons of morality, as well as the expression of the negative voice in all of us, our dark half or "second self."

What are some of the best shows that the band has played over the years and also how would you describe your stage performance?
For today it is a concert in the city of Kazan, which has been played as a part of our mini tour in late 2013. We were warmly welcomed and well supported technically.

Do you have any touring or show plans for the new release?
We are currently planning a tour for upcoming summer, hoping to capture some cities in Baltic countries through Belarus, probably getting to Poland. World web community firstly became acquainted with the album in the summer of 2013, and the official release at the Inverse Records came in the spring `14th. Therefore, several concerts as the presentation of the debut album have already been given in 2013.

On a worldwide level how has the feedback been to your music by fans of black and death metal?
Fans usually tell that music from our release is some continue from an old Katatonia era, it’s a pleasure for us to know that people from different parts of the world enjoy our music, hope we’ll be able to play in every such country.

Where do you see the band heading into musically during the future?
We do not think what style we want to play and who we’d look like. Today, it is important for us that our music is more diverse and less iconic, and would not cause association with well-known albums of well-known groups. Each of us brings to the music part of his perception of the future Negative Voice’s music, his personal view  the structure of the songs and overall band’s concept. And partly we ourselves wonder how the second album will be. There will be more influence of progressive and some «post»-like subgenres. The vocals will be more varied, with rich arrangements.

Are the band members involved with any other musical projects these days?
Konstantin (drummer) takes himself in side-projects from time to time, for example in death metal bands. Today, he continues to help his former colleagues from Inis (Moscow, Black metal). Andrew has its own, but currently suspended due to lack of time studio project.

What are some bands or musical styles that have had an influence on your music and also what are you listening nowadays?
Our musical taste ranges from DSBM to fusion. The key thing for us is that we listen to many different kinds of music. Some of us are ‘metalheads’ preferring math and progressive metal, some enjoy and old classic rock bands such as Black Sabbath, the Who, King Crimson. We accept each other’s preferences with respect, trying to acquaint with the bands one of us was not aware of.

What are some of your non musical interests?
Usually we are setting churches on a fire, wearing corpsepaint along with a rusty nails sticking out our jackets (just kidding). Each of us has a permanent place of work, so the music for us - the main interest in our spare time. We all like travelling; some of us spend time with family. In general, we are the peaceful and kind people trying to live an interest life.

Before we wrap up this interview, do you have any final words or thoughts
We wish all the best and good luck to the ADifferentShadeOfBlackMetalZine blog, hope you guys get a large amount of a bands respecting you as we do.

Posted by OccultBlackMetal at 10:47 PM No comments: 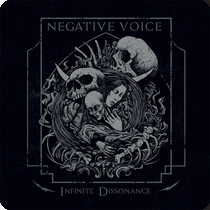 With  this  album  negative  Voice  bring  a  very  different  sound  to  melodic  black/death  metal,  keeping  everything  mid  tempo  along  with  traces  of  doom  metal  and  it  has  a  more  original  feeling  than  most  bands  of  this  genre.


Posted by OccultBlackMetal at 8:18 PM No comments: