1.Can you give us an update on what has been going on with the band since the recording and release of the new ep?
First of all, we have finally completed our line-up, we have a full-time drummer, Aig, now, which makes ready for performing live. By the way, on July 4th we’ll be performing at “Melnā Piektdiena” (Riga), which will be our first gig. Other than that, many things have happened. Actually “Fire of the North” on our part has been completed about a month before its release and about 4 months before it has been releases on CDs, so we had plenty of time. During this we managed to finish our new album named “Master of the Forest”, which will hopefully be released this winter already. By the way, one can also listen to one of the songs from the new album on our facebook page (www.facebook.com/varangnord).

2.Recently you have released a new ep, how would you describe the musical sound that is presented on the recording?
Brutal Nordic metal with the spirit of the Vikings in it. In-your-face type of brutality with folkish accordion chants.

3.This is the first release you have released since 2007 and the first one to be released under 'Varand Nord', can you tell us a little bit more about what has been going on during that time frame?
Well, “Balaguri” were active up until 2009, when they decided to have a bit of rest. Wolf, our guitarist/vocalist have been thinking a lot, preparing a lot, gaining experience in other bands. By the way, in one of these bands, “Begotten”, he has met our current bassist, Khurr. As a result, in 2012 he decided to restore “Balaguri”, but in a more melodic, Nordic and serious way. The same could be said about others also, they all have been trying themselves out in various bands, bringing that experience to Varang Nord eventually.

4.What are some of the lyrical topics and subjects the band explores with the music?
Mainly, we are inspired by the Nordic culture, Vikings in particular, as well as harsh northern nature and history. Well, the classical folk-metal’s “drink as much ale as you can” topic is also present in some songs, but that is not the main theme.

5.Originally the band was called 'Balaguri', what was the decision behind the name change and also the meaning and inspiration behind the name 'Varang Nord'?
First of all, “Balaguri” were mainly concerned with Slavic culture, and Varang Nord expands the area to all the Northern part of Europe, thus the new ideology, image of the band and all that stuff, as well as it signifies the overall change in the band’s music. Also, we ourselves come from a northern country and our ancestry is closely related to Varangians (Slavic and Baltic descendants of Scandinavians) themselves, which is why the name “Varang Nord” fits the band perfectly, in our opinion.

6.What are some of the best shows that the band has played so far and also how would you describe your stage performance?
Well, as we’ve already mentioned, with “Varang Nord”, our first gig will happen on July 4th. Concerning “Balaguri”, there were many great shows, all of them, actually, so it’s really hard to distinguish a particular gig in this respect. Maybe it would be a gig with the band “Epidemia” and the re-enactment club “Rubezh”, during which pagan music merged with the clash of blades, which was truly epic. As for the performance, we try to recreate the harsh atmosphere of the North, brutal and unforgiving.

7.Do you have any touring or show plans for the future?
Right now we are thinking about performing around Latvia a bit, in the cities of Riga, Daugavpils and Liepaja for example, but there are no definite plans by now. After that, a couple of gigs in the neighbouring countries perhaps. All the details are being thought through at the moment, and we’ll be sure to announce definite touring plans as soon as they are ready. Anyhow, we are always open for the offers of performing, and if anyone invites us to participate in a gig, we will be glad to consider that.

8.On a worldwide level how has the feedback been to your music by fans of pagan and folk metal?
It has been surprisingly good. We were amazed and even shocked a bit by how warmly the worldwide public received us, which always is inspiring. We are truly happy that our music was able to find its place in the hearts of many people and we say our thanks to all who support us. Oh, one more thing is that it has been very pleasing for us to be compared to such bands as Amon Amarth and Finntroll, compared positively, of course. We surely haven’t been expecting that.

9.Are any of the band members also involved with any other bands or musical projects these days?
Yes, we are still developing ourselves in various styles to enrich both our personal and common experiences. Wolf plays in “Begotten”, “Asthma” and “Saintorment” and Khurr in “Yomi”.

10.When can we expect a full length album and also where do you see the band heading into musically during the future?
We hope that we’ll be able to release or next album, “Master of the Forest”, this winter already and also you check out one of the album’s songs online. As for the future, we are trying to mace our music more melodic and distinctive, maintaining the traditional Varang Nord’s sounding. More or less, this is our main idea about the sound – we don’t try to change it drastically from album to album, instead trying to get our style polished, perfecting it with time.

11.What are some of the bands or musical styles that have had an influence on your newer music and also what are you listening to nowadays?
Both “Balaguri” and “Varang Nord” are heavily influenced by “Turisas”, also “Amon Amarth” and “Finntroll”. If we speak about the epitome of influence, we could distinguish a particular song – Battle Metal by “Turisas”, which, by the way, has been the one that influenced Wolf to start composing folk-metal.

12.How would you describe your views on Paganism?
We perceive paganism as a part of culture, an image of sorts, an inspiration that helps us creating our songs. We ourselves are not particularly religious, and the same could be said about our attitude towards paganism.

13.What are some of your non musical interests?
Wolf is interested in military vehicle models, now a bit less maybe, but it was a big part of him some years ago. Khurr is all about Oriental studies, history and philology, and Aig is a big fan of rally racing, where he is not only a spectator, but also participates himself. And, of course, drinking fine ale is our main common non-musical interest.

14.Before we wrap up this interview, do you have any final words or thoughts?
Soon, the fires of the north will burn bright, and our guitars shall rise into the sky along Odin’s spear! We hope to someday see everyone, who is interested in our music and share tales and countless mugs of ale with them!

Posted by OccultBlackMetal at 9:32 PM No comments: 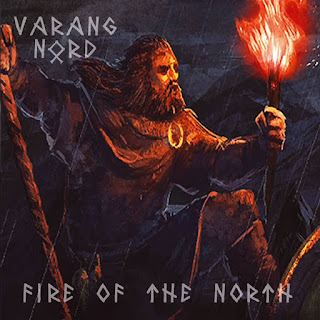 https://metalscraprecords.bandcamp.com/album/varang-nord-fire-of-the-north
Posted by OccultBlackMetal at 9:30 PM No comments: