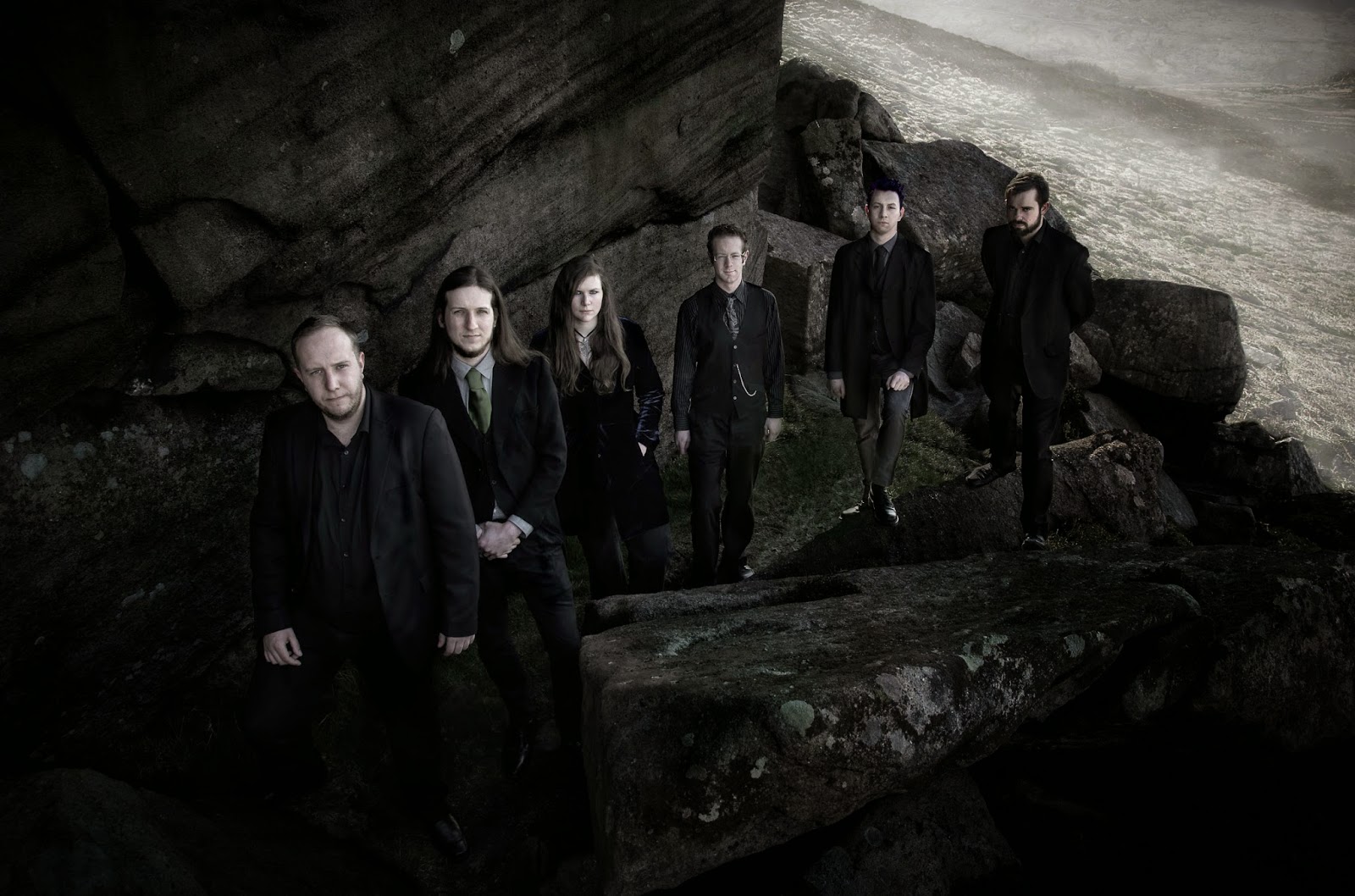 1.Can you give us an update on what has been going on with the band since the recording of the new album?
Truthfully, after the album was done we had a bit of a break! We’d been working very intensively on preparing for the recording and then actually getting everything recorded, so we all took some time to relax. Since then, however, we’ve been very busy organizing everything for the release- getting together all the rewards for our Kickstarter backers, preparing merch and the album artwork, as well as finding time to play some shows here and there!

2.You have a new album coming out in October, how would you describe the musical sound of the new recording and also how does it differ from the stuff you have released in the past?
Musically, I think this is our most complete album- we’ve spent a long time writing, practicing and playing these songs (some of them were written shortly before the release of our previous album, Monuments) and we’re very comfortable with them. There’s a lot more depth to this album- we added more sounds (violin, melodeon, clean vocals) and really tried to make it sound much heavier than Monuments. Having a recording wizard like Chris Fielding behind the desk really helped with that! I think Of Roots and Flesh differs from our previous material because it sounds much more focused, much richer and much more epic than anything we’ve done before.

3,This is going to be the first album to be released in 4 years, can you tell us a little bit more about the 4 year gap?
We released Monuments in December 2010, and spent most of 2011 promoting and touring the album- even getting to play at Bloodstock Festival, which is one of the UK’s biggest festivals for extreme metal. With the amount of shows we were playing, it was difficult to find time to work on new material and we each faced various difficulties in our personal lives that made it difficult to really begin working on the songs for Of Roots and Flesh. Apart from the creative barrier, we also had to figure out how we could afford the recording of the new album- Kickstarter was the best option for us, and our fans were spectacular in raising the money so that we could record this album properly.

4.Your lyrics cover nature, psychological, and philosophical themes, can you tell us a little bit more about your interest in these topics?
The city which we hail from, Sheffield, is located right next to a huge national park called the Peak District- it’s a beautiful landscape of hills, lakes and forests which we draw a lot of inspiration from, and the power and majesty of nature is certainly something that inspires my own song-writing. The psychological and philosophical themes present in our work are because we didn’t just want to write songs about trees- we think it’s important to explore humanity’s relationship with nature and to see ourselves as part of that landscape, part of the living tapestry of the universe.

5.What is the meaning and inspiration behind the name 'Northern Oak'?
Apart from being a fairly unsubtle nod to where we come from (the North of England) and our love of nature (exemplified in the Oak tree, which has a particularly special place in English folklore), there’s no great meaning in the band name- it was inspired by a camping trip that myself, our original vocalist, keyboardist and drummer went on in 2006, before the band had really started. We camped out on the side of a hill in the Peak District in February- there was snow on the ground and frozen puddles surrounding our tent. The beauty of our surroundings inspired us all, our keyboardist suggested the band name and it stuck.

6.What are some of the best shows that the band has played over the years and also how would you describe your stage performance?
I think our finest moment was performing on the New Blood stage at Bloodstock Open Air 2011- we’ve been fans of the festival for many years and it was such an honour to get to perform there. I don’t remember a great deal about the performance (since I was much more nervous than I normally am) but I believe we had quite a big crowd! Another highlight was supporting Martin Walkyier’s Skyclad at his Viking Funeral Festival in Nottingham- it had been a great day and the crowd were really into it, so we got a fantastic reaction. I’d describe our performance as pretty energetic- we’ve been favourably compared to bands like Eluveitie, and do our best to put on a big, powerful show.

7.Do you have any touring or show plans once the new album is released?
We have a number of dates booked around the UK during October and November as part of an album launch tour- starting with the album launch gig in our hometown on October 4th and continuing until the 22nd of November when we’re performing at Valkyrian Festival with acts such as Cnoc an Tursa, Azylya and Ex Libris.

8.Currently you are unsigned are you looking for a label or have received any interest?
With our last two albums we’ve made the decision to self-release; we negotiated a great deal with a small internet label to get our last album on iTunes, Spotify and other similar services and didn’t feel the need to approach any of the larger labels, since it was important to us that we had total control over our music and were able to keep as much of the money that we’d all spent on making it as possible. For Of Roots and Flesh, we’ll be approaching several labels with the hope of signing a deal- we’d like help promoting the album and spreading the word, and that’s something we feel a good label would really be able to help us with.

9.On a worldwide level how has the feedback been to your music by fans of folk and black metal?
We’ve received a lot of positive feedback from all over the globe- I know we have at least one dedicated fan in Japan, since he ordered a tshirt and CD through our website and I sent him a personal thank you message! Beyond that, we’ve definitely had some great feedback from fans across Europe- one fan of ours from Russia actually came over to the United Kingdom on holiday this summer, and pledged enough money to our Kickstarter campaign to be given a personal tour of the Peak District by us, which was very flattering.

10.Where do you see the band heading into musically during the future?
I consider Of Roots and Flesh to be the album where we’ve really established what our sound should be, so personally I can see us really just developing on our current approach- making bigger, heavier, more atmospheric songs, making the acoustic sections more nuanced and complex and generally just trying to improve on everything we’ve released so far. We’re very proud of this album, but I always think that we have room to improve!

11.What are some of the bands or musical styles that have had an influence on your newer music and also what are you listening to nowadays?
We all have very different musical tastes, which I think is a big part of what makes us sound unique.  I’ve personally been influenced by bands such as Agalloch and pre-Heritage Opeth, but because I listen to a lot of diverse stuff (from Behemoth to James Brown to videogame soundtracks) and the rest of the band have their own wildly divergent tastes, our newer music is basically a big melting pot of all the things we love about music thrown together and crafted into Northern Oak songs. At the moment, I’m listening to quite a lot of black/death metal- Behemoth’s latest album 'The Satanist' is the best album to come out this year, in my opinion.

12.Does Paganism or Occultism play any role in your music?
Not directly- none of the band are practicing pagans or occultists, so we’ve tried to ensure that whenever we write a song about subject matter which is sacred or important to people who follow those traditions that we’re careful and treat it with respect. In a way, I think that English tradition and folklore blends together with paganism in a way few people realize- a lot of pagan traditions (the Green Man, well-dressing, maypoles) are an integral part of English culture and are just considered part of the cultural fabric of our nation.

13.What are some of your non musical interests?
Just as we all have very different musical tastes, we all have very different interests outside of the band- I’m a big ice hockey fan, and both play and watch the sport. I’m also an avid videogamer and comics writer, working on a couple of comics that I’ll hopefully find a publisher for soon! Our flautist Catie is really into morris dancing and motorbikes, while our bassist Rich loves football. Our non musical interests don’t really intrude on what we do in Northern Oak (apart from the musical influence I take from video game soundtracks), although Rich has tried to get us to write a song about football before...

14.Before we wrap up this interview, do you have any final words or thoughts?
We’re really proud of what we’ve put together with Of Roots and Flesh- we wanted to create the best album that we possibly could, a record that would inspire and move people, and we hope that everybody who listens to it feels that way.

Thank you very much for the questions! 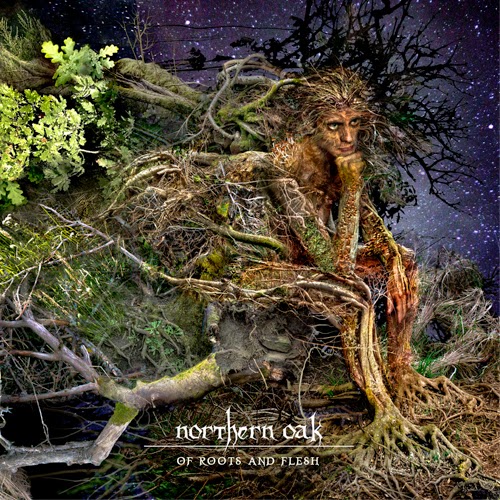 Posted by OccultBlackMetal at 12:47 PM No comments: 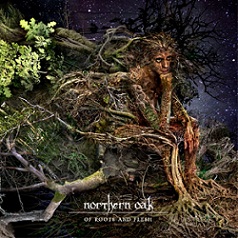 Northern  Oak  creates  a  very  progressive  style  of  folk  metal  that  also  has  a  heavy  black  metal  influence  to  it  along  with  a  great  amount  of  melody  and  some  death  metal  elements  to  create  a  very  original  sound,  the  production  sound s very  professional  for  being  a  self  release d recording  while  the  lyrics  cover  nature  and  philosophical  themes.