1.Can you give us an update on what has been going on with the band since the recording of the new album?
We’re still working for some surprises for the fans. An official video clip, a lyrics video and an awesome release party are on their way. We’re excited for the upcoming jigs and we’re looking forward to fill our schedule for the summer.

2.You have a new album coming out in May, how would you describe the musical sound that is presented on the recording and also how does it differ from your previous full length and demo?

We worked on the pieces aiming to a clear and warm sound, trying to express the melody at its best. This album differs from the previous works in the sound quality: much deeper and clearer; and also in the amount of different styles and keys we played in: different moods require different kinds of writing. We are satisfied of the improvements we achieved in these years.

3.Your lyrics cover the local folklore and history of your own country; can you tell us a little bit more about your interest in this subject?

Since we were in high school we were keen on legends and old stories, as well as nature, hiking on the mountains, and we were also curious about the way things we take for granted today were done in the old days. Therefore, as well as many other folk metal bands from all across Europe we wanted to tell these stories of our Homeland in our music. Each piece is the result of research and deepening on the subject, which is both an occasion for us to learn something new about a topic we were already familiar with, and also for the listener for discovering a new story.

4.What is the meaning and inspiration behind the name 'Kanseil'?

Our name is based what may be the ancient name of the Cansiglio plateau located in the North-East of Italy, which dates back to the pre-roman era. The ancient etymological root of our mountain’s name was something that fitted really well for the purpose. The name is both familiar as it strongly resembles the modern local name and mysterious since the spelling and the sounds that bring to a time when language and culture were something we’re totally unfamiliar with today.

The best memories we have are of course the shows on the huge stages of big open-air festival with big names such as Korpiklaani, Enslaved, Arkona, Omnia and so on, with a large mosh-pitting crowd. Some of the best shows are also those we sometimes play for a very specific purpose or anniversary, in smaller clubs with local bands supporting us, where the fans are really passionate and create a family-like atmosphere. Our performances are very spontaneous, we try to involve the crowd in the show, showing off our instruments and moves fitting on the music. We have a lot of fun playing live shows and the fans seem to appreciate.

Yes, we already have a pretty busy schedule for the summer: we planned many shows all across northern Italy.

7.The new album is coming out on 'Rockshots Records', how did you get in contact with this label and how would you compare working with them to your older label 'Nemeton Records'?

Rockshots Records took contact with us when we were still recording pre-productions a year before the recordings in the studio. When time came, they were still interested in our project, so we agreed it would be a successful collaboration. Rockshots Records works very professionally and gives a lot of value to your work. The now late Nemeton Records was a little label that suited best for a small band with its fist demo or album, and we’re grateful to their staff for the years of collaboration and the help we got at the beginning. When Nemeton got out of the business we took the chance to start a new journey with a bigger label such as Rockshots Records.

We got a surprisingly good feedback. Most of our fans are from Italy, but we got a lot of reviews, always good, from all of Europe, who appreciates the freshness brought to the genre and the unusual language we sing in. We got purchases on our online store from most of Europe, USA and Japan, and according to the stats of our social medias, a large part of likes and views come from Argentina, Mexico and Brazil, probably because of all the people there who have ancestry from Veneto and find our topics interesting. We look forward to know what the world thinks about the new album and hope to not disappoint the fans expectations.

We will continue to develop for sure, producing new music working on a better sound, doing experiments with various styles and moods.

We are mostly influenced by the main bands in the folk-metal landscape of the last decade, both Italian and from other European countries, as well as the medieval and traditional music from Western and Eastern Europe. In both our albums you can hear the influence of post-metal and avant-garde bands such as Alcest or Agalloch, especially in the new one: we enjoyed experimenting the switch between harsh electric and melodic acoustic parts. When it comes to solos and rhythmic there’s still a strong influence from classic heavy-metal bands. These are the bands we still listen to nowadays, along with other non-metal or folk bands such as Italian artists and classic rock.

Our common interests are related to the passion for nature and the mountains, like hiking, skiing, biking and photography. Our bagpipe player is also a bagpipe maker, who works wood on the lathe making instruments and any king of wooden object.

Thank you for your interest an attention, we hope the new album will be enjoyed by the old fans and discovered by the new ones, and we look forward to play it on stage!


Posted by OccultBlackMetal at 8:00 PM No comments: 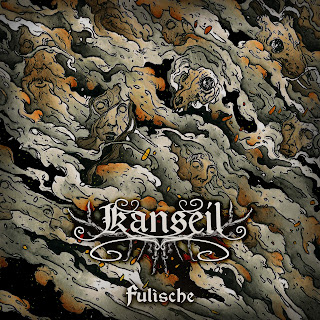 Firewood  burning  along  with  some  folk  instruments  start  off  the  album  while  spoken  word  parts  are  also  used  briefly  before  going  into  a  heavier  direction  which  also  introduces  death  metal  growls  and  black  metal  screams  onto  the  recording  as  well  as  the  faster  sections  of t he  songs  bringing  in  a  great  amount  of  blast  beats.

Kanseil  plays  a  musical  style  that  mixes  folk  and  pagan  metal with  the  heaviness  of  black  and  melodic  death  metal  to  create  a  sound  of  their  own,  the  production  sounds  very  professional  while  the  lyrics  are  written  in  Italian  and  cover  the  local  folklore  and  history  of  their  homeland  along  with  some  nature  themes.