Well we're a blackened death metal band, from Mobile AL, the heart of the bible belt. We are basically a group of people who got together because we were all dissatisfied with the horde of bullshit "southern metal" bands infesting the scene for the past ten years or so in our area. Too many people trying and failing to be Pantera had diluted the scene to the point that no one could take it seriously. No one gives a shit that you're southern, so we wanted to give our scene an alternative to that style. Over the past few years more and more amazing bands have been popping up on the Gulf Coast that share our vision of bringing our local music scene up to date with the rest of the world. We're happy fucking campers at the moment.

2.So far you have released one album, how would you describe the musical sound that is presented on the recording?

We had this idea of combining the structure and flow of pop music with the extreme metal that we all love. Huge choruses, melodic flow, and the atmoshpere thats prevalent in European black metal. Basically trying to combine the best of both worlds to trick the ear.

3.Your lyrics do cover some occult and anti religion topics, can you tell us a little bit more about your interest in these subjects?

The lyrics dont directly reflect the views of the guys involved, though as a whole we fucking despise all forms of organised religion and have an appreciation for any attack against it. With that said each song is written from the perspective of a fictional character. What we do lyrically could be thought of as short horror vignettes. Think Tales from the Crypt with a splash of occultism.

4.What is the meaning and inspiration behind the name 'Curse The Flesh'?

It sounded cool. We didnt realize it was actually a Morbid Angel song until later. By the time we realized that we'd spent too much on branding to change it. Still sounds cool though.

Our home town shows have been badass. We like to get as theatrical as possible and the people that come to our shows lose their shit in the pit. We've played with bigger groups like Abigail Williams, Michael Graves, Vital Remains etc etc but the local shows have been just as if not more crazy.

We are gearing up for the 4th annual Communion of Darkness black metal festival in South Carolina. We'll be rolling with Lustravi from Panama City, Florida and Sytherium from New Orleans, Louisiana. These are bands we feel are on the cutting edge of extreme metal on the Gulf Coast.We're planning a trip up the east coast of the US at the beginning of next year with Lustravi, and hope to hit the west coast by the end of the year

If the time comes that we receive an offer for something we are not capable of accomplishing ourselves, then we would consider it. However, at the moment we have an amazing team that fulfills most of the things that a record label would offer. Our killer publicist in Zoheb at Qabar-Extreme Music PR. Those guys are fucking awesome. The majority of our art is done by the extremely talented Nate the Knife aka Nathan Britton, our unnoficial "tour manager/chauffer" Jabba, our merch girl Kayla Dahmer, the list goes on. We've been really lucky in the amount of support we've received from people who believe in what we're doing as strongly as we do. So in short, no.

8.On a worldwide level how has the feedback been to you music by fans of black and death metal?

Russia appears to have a healthy interest in us seeing as how we've had more illegal downloads of our album there than anywhere else. We keep track of that shit and document a carefully detailed "Fuck/Kill" list. We know where you live. Seriously though, we've been shocked by the response we've received in the UK, Middle East, the Netherlands as well as on our home terf. To see people so far away appreciating what we're doing when we are only a small fish in a large pond inspires us to keep pushing ourselves and continue to fight the good fight.

We definitely have a certain sound that we established with the first album. Since then we have undergone a heavy lineup change and while we want to stick to what we do, we have new musicians from different musical backgrounds that open up new possibilities for us to do more.

There are too many to list. Each member has completely different musical tastes and backgrounds. Collectively I dont think we could find one band that we could all agree on to be "inspirational" to us. And we like that because thats what makes us what we are.

We like to give back to our community. For instance: giving makeovers to the homeless to make them appear more hirable, getting bags of ice from the local gas station taking them the the harbor and releasing them back into the wild, ensuring our local bars, liqour stores and drug dealers have a steady income, shit like that.

We really want to get our music out to as many people as possible. So we'd like everyone to know that our album Black Majesty is available at every online music retailer and is available for streaming on Spotify and Bandcamp. Add that shit to your playlist, come to our shows, buy a T-shirt do something so that we dont have to whore out our guitarists anymore. And to those already doing so, we truly love you guys and cant wait to bring you more.

https://www.facebook.com/Cursethefleshmetal/
Bandcamp
https://cursethefleshofficial.bandcamp.com/releases
Posted by OccultBlackMetal at 5:18 PM No comments: 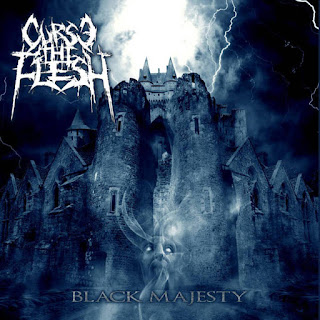