1.       For those that have never heard of before, can you tell us a little bit about the band?

Four oddities who like jazz and social justice, making peculiar music. We also have a variety of wonderful outside musicians who bless us with their talent on occasion.

2.       You have a new album coming out in January, how would you describe the musical sound that is presented on the recording?

We do indeed – It’s called Speak Not of the Laudanum Quandary. Musically, it’s a mixture of bleak metal textures with a bit of jazz fusion, a bit of prog rock and a healthy dose of the eccentric and theatrical. The vocal delivery is unlike conventional black metal, or clean vocals; it is called Sprechgesang, and was highly inspired by the mad ravings of the legendary Mr Doctor of Devil Doll.

3.       What are some of the lyrical topics and subjects the band explores with the music?

This is actually one of the key components of Speak Not…, because it explores territory rarely approached in metal. The album is made up of 7 “veils”, or observations; each is concerned with a particular issue to do with British imperialism, and how that issue propagates into modern life. For instance, the first track looks at the displacement of indigenous peoples – this has particular relevance in Scotland due to a prolonged ousting of crofting families called the Highland Clearances, but of course is widely recognizable in the actions of imperial Britain throughout the world. Furthermore, it doesn’t take a historian to recognize parallels with modern day attitudes to refugees. It’s very much important to remember the responsibility we bear for many of the less privileged peoples today, considering how our comfort can often be traced back to others suffering.

4.       What is the meaning and inspiration behind the name 'Ashenspire'?

The name refers primarily to smokestacks – vast arrays of chimneys that dominated the skyline here in Glasgow for decades, and similarly so in industrial cities all over the UK. Similarly, most of the older architecture in our city is stained near-black with soot. It also makes reference to the towering blocks of flats all over modern Britain in the fine brutalist architectural tradition.

5.       What are some of the best shows that the band has played so far and also how would you describe your stage performance?

Well, as of yet we have only performed a couple of times; we don’t like to play throwaway shows, every performance has value. But each time has been utterly exhilarating. Doffs of the cap to our friends at Cog Promotions and the North of the Wall team. The performance itself relies on playing tightly, but with feeling, and a pervasive atmosphere tending towards lunacy. Needless to say, it’s remarkable fun for us.

We’re going to be supporting the wonderful gents in Ash Borer this April in Glasgow, and details of a big album release shindig (with some extremely talented friends of ours) should be public soon enough. We’d absolutely love to go a-touring for the album, we’ll have to see what opportunities arise with regards to that.

I think delighted would be the word. The folks at Code666 have been very good to us. We’re extremely blessed to be part of such a sterling label.

8.       On a worldwide level how has the feedback been to your music by fans of black and avant-garde metal?

So far so good, I think is the general consensus. Some very kind words have come in from all over the globe. Folks who are looking for more music along the lines of Dødheimsgard, Vulture Industries or our good friends in A Forest of Stars seem to find something to enjoy. It doesn’t seem to be music that people who like orthodox black metal particularly connect to, but we had that coming, really. Honestly, one of the more surprising things has been the feedback from people who don’t listen to any metal at all – very positive.

9.       Where do you see the band heading into musically during the future?

10.   What are some of the bands or musical styles that have had an influence on your music and also what are you listening to nowadays?

Devil Doll are a big one of course, as are our aforementioned contemporaries; aside from them, Snarky Puppy, Miles Davis, Sun Ra, Deep Purple and Ulver have all had a significant impact, among a huge number of others. I personally haven’t been able to stop listening to the new record by Edward Scissortongue and Lamplighter, Tell Them It’s Winter, ever since it came out. Brooding and melancholy in extremis, but insightful and addictive hip-hop for the discerning listener. Safe to say some of that sound will have leeched into our own writing come album two…

11.   What are some of your non-musical interests?

Outside of music we all tend to stay creative as best we can, in various different ways. We have an actor/comedian, an educational psychologist, a physicist and a chemist, so that fairly plays into it all. Consistently, though, we all like absurd humour, politics, posh beer, and dogs.

12.   Before we wrap up this interview, do you have any final words or thoughts?

We hope that all of those who read this enjoy the new album, and we hope to hear discussion and viewpoints on its subject matter; that’s what it’s there for. So long as it makes people think, it has been successful. Many thanks for your time, be safe.

Posted by OccultBlackMetal at 6:52 PM No comments: 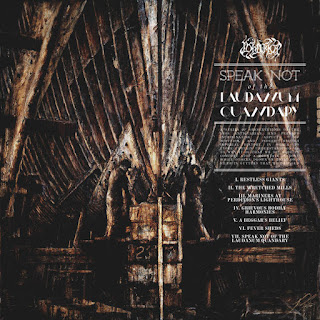 Ashenspire  plays  a  style  of  avant  garde  metal  that  is  very  theatrical  while  also  bing  very  heavily  influenced  by  black  metal,  the  production  sounds  very  professional  while  the  lyrics  cover  the  absurdities  and  tragedies  of  British  imperialism.

http://tometal.com/song-premiere-scottish-avant-garde-black-metal-band-ashenspire/
Posted by OccultBlackMetal at 6:04 PM No comments: