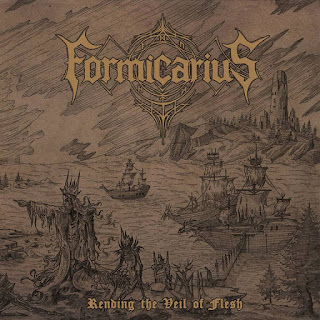 United  Kingdom's  Formicarius  have  returned  with  a  new  recording  which  continues  the  symphonic  and  epic  style  of  black  metal  from  previous  releases  and  this  is  a  review  of  their  2019  album  "Rending  The  Veil  Of  Flesh"  which  will  be  released  in  September  by  Schwatzdom  Production.

http://www.formicarius.co.uk
Posted by OccultBlackMetal at 6:37 PM No comments: 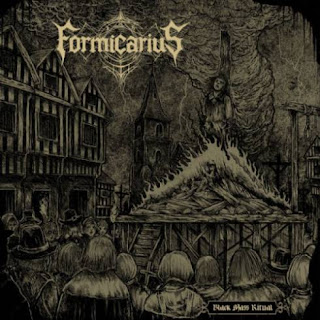 Formicarius  plays  a  style  of  black  metal  that  is  very  melodic  and  symphonic  sounding  while  also  demonstrating  a  great  amount  of  talent  and  skill,  the  production  sounds  very  professional  while  the  lyrics  cover  darkness  and  occultism  themes.

Posted by OccultBlackMetal at 3:51 PM No comments:

1.Can you give us an update on what has been going on with the band since the recording and release of the single?

We recorded the single back in March this year. There's been a lot going on behind the scenes to prepare for the band's launch, which happened on 1st July. Right now we're in the middle of booking a mini-tour during September and rehearsing for that.


2.Recently you have released a single, how would you describe the musical sound that is presented on the recording?
Evil. It's a fucking gargantuan sound, especially with the keyboards, and between a straight minute of blastbeats and one of the best guitar solos you'll hear this year I don't really know what else to say - it's just very, very heavy.


3.Some of the lyrical topics covered Egyptian Mythology, can you tell us a little bit more about your interest in this topics?
There isn't much more to it than a passing interest – it's fascinating but we're no experts on the subject in the way Nile are. Egyptian Mythology just provides an appealing backdrop to extreme metal for us; it's fantastical with powerful and extreme ideas and characters, and it can be revoltingly dark. It also provides a vivid setting which can easily be brought out in music, so it's a good basis for telling a story.


4.What is the meaning and inspiration behind the name 'Formicarius'?

The Formicarius is one of the first books to discuss Witchcraft, written in the early 15th Century. This bleak time period of violent superstition and paranoia concerning the occult is something underlying all of our music, far removed from the industrial and modern themes. We explore the historic accounts in the Formicarius on the forthcoming album, and the mysterious and dangerous overtones of the occult are something which we will continue to explore. Therefore, Formicarius is an appropriate title to unite us by.

5.Has the band done any live shows yet or is it still in the works?

We have yet to make our live debut, which is being planned for September. We are all veterans of this industry and are taking our time to prepare carefully – the world shan't forget us once we begin our conquest.

6.Currently you are unsigned, are you looking for a label or have received any interest?

Indeed, having announced the band only 3 weeks ago we are still unsigned. There has been interest surrounding us and the album, and we are open to the idea of a label provided we can come to a compromise which benefits both parties. That said, we have slaved over our already complete album and shan't relinquish our lifeblood without reason to.

Most people seem to 'get' it and are generally impressed with the quality of a record coming literally out of nowhere. There's basically no competition in regards to quality control as many unsigned bands do themselves a disservice by not investing properly in their music, so it isn't surprising that the reaction has been overwhelmingly positive.

8.What is going on with some of the other bands or musical projects these days that some of the band members are a part of?

De Profundis signed to Wickerman recently, and they're releasing their new album this September. I believe Premature Birth are writing an album, and Maxdmyz are training up their new guitarist.

9.You have a full length album coming out during the end of the year, what should we expect musically?

The single 'Lake of the Dead' was released to serve as a teaser for the album. The same overall production and sound spread across 8 tracks totalling at 45 minutes exactly. In my opinion we haven't revealed our best tracks yet – the wait will be worth it.

We recorded an Emperor cover for the b-side of the single in order to pay homage to what is probably our biggest collective musical influence. Mid 90s era Satyricon comes to mind, along with Sigh, Bathory, Immortal and of course our English brethren Hecate Enthroned, Eastern Front, Old Corpse Road and so on. We are constantly influenced by our contemporaries.

11.How would you describe your views on Occultism?

I speak only for myself when I say I don't really have any views on the subject. It's fascinating from a historical and sociological perspective, and I'm interested by ideas and stories which are fantastic in nature, but I'm not a believer in things which aren't backed by sound logic. It's something which real people have died for, which is fucking crazy... and crazy is exciting. It's not different from how I view religion, so I guess that makes me impartial.

Outside of music I just try to experience people, places and life and take inspiration from that. It's not an uncommon way to balance a working life alongside a music career in order to stop yourself from going insane.

Our aforementioned single 'Lake of the Dead' is available for free download and streaming from http://formicariusband.bandcamp.com – there's absolutely no reason for you to not make your own unbiased mind up. If you like it I would highly recommend that you watch this space and keep an eye out for our live exhibitions and the full length album later this year.

https://www.metal-archives.com/bands/Formicarius/3540406692
Posted by OccultBlackMetal at 9:52 PM No comments:

Formicarius/Lake Of The Dead/2015 EP Review 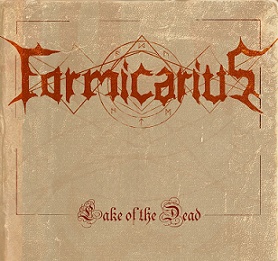 Formicarius  plays  a  style  of  symphonic  black  metal  that  is  very  heavily  rooted  in  the  mid  90's  style  and  also  brings  back  the  aspects  that  made  the  genre  interesting  back  in  those  days,  the  production  sounds  very  professional  for  being  a  self  released  recording  while  the  lyrics  cover  darkness  and  occultism  themes.

Posted by OccultBlackMetal at 12:23 AM No comments: