1.For those that have never heard of you before, can you tell us a little bit about the band? Joe: we're an American blackened Metal band from dallas/fort worth Texas.

2.Recently you have released an ep, how would you describe the musical sound that is presented on the recording? Joe: pretty much its an extreme metal recording with some heavy black and death metal influence. Dark melodies with some aggressive parts throughout the release.

3.What are some of the lyrical topics and subjects the band explores with the music?  Joe: The e.p is a concept release, a fictional modern take on the 4 horseman of the apocalypse.  Pretty much how us as a human species destroy the earth. I.e. war, over population and pollution.

4.What is the meaning and inspiration behind the name 'Oblivion Circle'? Joe: i believe we as humans blindly follow and repeat ourselves throughout history. Almost like we're programmed to self destruct. So oblivion circle is just a infinite loop of existence.

5.What are some of the best shows that the band has played so far and also how would you describe your stage performance? Joe: Since we're a new band, we haven't played a live show yet.

6.Do you have any touring or show plans for the future? Joe: we're playing a local fest here in our home state in January. (our debut show)

7.The ep was released on 'Sepulchral Silence Records' are you happy with the support that they have given you so far? Joe: Iam very pleased with the exposure and feedback we have recieved.

8.On a worldwide level how has the feedback been to your music by fans of black and death metal? Joe: we haven't been told we suck or anything yet. Ha, people seem to enjoy it. We've been played on a few podcast radio shows and on air Shows here in TX and one in Arizona.  Seem to get more attention in the U.K, been played on few shows from london and ireland.

9.When can we expect a full length album and also where do you seethe band heading into musically during the future?  Joe: probably going to stick to the blackened death formula, maybe get into a more progressive writing approach, hopefully by next year we will put out a full length, We're currently writing new material.

10.What are some of the bands or musical styles that have had an influence on your music and also what are you listening to nowadays? Joe: i listen to alot of different bands but iam really influenced by cattle decapitation, Winterfylleth, forgotten tomb and vattnet viskar. Iam currently stuck on "Aborted" (RetroGore) and Regarde les hommes tomber (exile)

11.What are some of your non musical interests?  Joe: video games and craft beer. Ha.

12.Before we wrap up this interview, do you have any final words or thoughts? Joe: just huge big thanks to everyone that supports and listens to Oblivion Circle, Cheers!

Posted by OccultBlackMetal at 4:15 AM No comments: 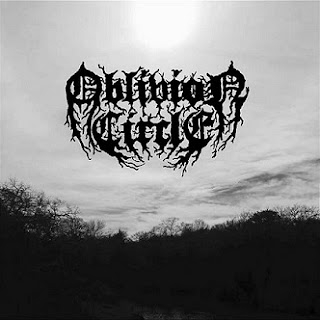 Throughout  the  recording  there  is  a  great  mixture  of  slow,  mid  paced  and  fast  parts  and  death  metal  growls  can  also  be  heard  at times  and  when  guitar  solos  and  leads  are  utilized  they are  done  in  a  very  melodic fashion  and  as  the  ep  progresses  the  songs  also start  incorporating  more  elements  of  metalcore.

Oblivion  Circle  plays  a  musical  style  that  is  mostly  rooted  in  the  melodic  styles  of  black  and death  metal  and  also  bring  in  elements  of  metalcore  to  create  a  style  of their  own,  the  production  sounds  very  powerful  while  the  lyrics  cover  darkness  and  war  themes.