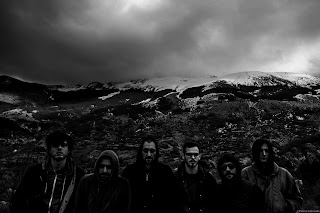 Hi there, first of all thanks a lot for your interest in our band! Sice we’re in lockdown since 11 of march, poeple can just listen to our music digitally or buy our merch, unfortunately no live shows. Anyway we feel the new album has been welcomed in the metal scene and we are so glad about it.

It differs quite a lot. We continue our research on atmospheres ut we added more aggressiveness as well as more depth in our music. In 5 years we gew a lot as musiciand and as peolple, our personalities became more complex and more mature, and all this is into Ver Sacrum.

3.This is also your first release in 5 years, can you tell us a little bit more about what has been going on during that time span?

We played a lot. Mainly that but also we met a loto f musician, labels, venues, artists that help us to have different prospectives on music and on how to be a band. Without then our music would have suffered, that’s for sure.

4.What are some of the lyrical topics and subjects the band explores with the newer music and also how would you describe your progress as songwriters over the years?

We don’t have a message, such as political or ideological, none of that. Our goal is chatarsis, abstraction and detachment from reality. Our lyrics are very poetic, ermetic and surrealistic, we describe deam-like (better nightmare-like) scenarios, it’s like a fairy tale but a very fucked up, dark and disturbing. Ver Sacrum is a celebration of the path that goes from destruction to emptiness, rebirth and than desctruction again, all lyrics are functional to this concept.

5.What is the meaning and inspiration behind the name 'WOWS'?

The name was supposed to be an acronym for War On Wall Street, but then the name WOWS claimed his own life, so we lose the dots and keept it that way. We like it for the sound, nothing to do with the exclamation “wow!”. We also discover that wows is a parameter on old analog delays, a weird effect generated by the tape, and yeah we kind of feel like a weird sound effect I guess.

The front artwork is a oil on canvas painting by Paolo Girardi. It’s the second cover that Paolo painted for us, for Ver Sacrum he took inspiration from the earthquakes that shook Italy and caused a loto f death and pain. So you can see the destroyed structures and the smoke in the sky, a perfect representation of destruction, such as the very beginning of the path we celebrate in Ver Sacrum.

Well I have to say we enjoy almost every gig we had. We played Rottura del Silenzio and Krakatoa fest, amazing venues with amazing bands, but we also remember gladly our first tours with Postvorta and Zolfo, of our gigs in our hometown Verona at Colorificio Kroen or at The Factory. I would describe our performances as deep, heavy, loud, ritualistic and atmospheric, but it’s really up to everybody else to confirm that.

8.The new album was also released through a good amount of labels, can you tell us a little bit more about the labels you worked with on the new album?

Sure! Dio Drone was the first label who showed interest in our new album and we are really happy for this, we look up to every artist in the label and we love the dark and atmospheric attitude they have, we feel very close to their vision of music and art. Shove records is a historic DIY label on Italy, an istitution for the hardcore and estreme scene in Italy as well as mailorder of pretty unique titles, we are so glad to e a part of it! They also recently loaded all releases on bandcamp, i strongly suggest to look it up! We came across Coypu Records and Hellbones Records in the processo of looking for a label, we liked each other and we decide to collaorate. We are very happy of our labels, we like DIY scene, it’s full of passion and love for music. Coypu Records in particolar is not a metal label, they just put out what they like, so we are even more happy to be a part of it alongside great artist like Soviet Soviet, even if the musical genere is diferent; we love this attitude, pure passion!

9.On a worldwide level how has the reaction been to your music by fans of black, doom, post metal and hardcore?

Reviews are going nicely, we get a lot of appreciation, for sure more than the previous release, I hope we’ll have the same interest also in live shows, when it will be possible of course.

We have some ideas, surely we won’t follow any mainstream line, but we could say it only when we actually have new music I think.

We are six people so I would say a lot. I speak for myself, I like graphical arts and in this lockdown I started drawin a lot. If you wanna know more I’m afraid you have to buy us each a beer.

Thanks to everyone interested in our music, thanks to everybody who helped us to realize Ver Scarum, you know who you are!

Posted by OccultBlackMetal at 5:48 PM No comments: 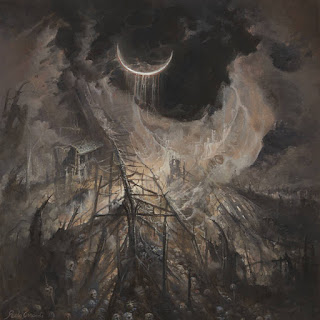 Atmospheric  soundscapes  start  off  the  album  along  with  some  keyboards  a  few  seconds  later  while  whispers  can  also  be  heard  briefly,  When  the  music  speeds  up  a  great  amount  of  tremolo  picking,  blast  beats  and  black  metal  elements  can  be  heard  as  well  as  some  dissonant  melodies.

Most  of  the  songs  stick  to  either  a  slow  or  mid  tempo  direction  along  with  the  solos  and  leads  being  done  in  a  very  dark  yet  melodic  style,  clean  playing  is  also  utilized  quite  a  bit  throughout  the  album  as  well  as  one  track  also  introducing  clean  post  metal  style  vocals  into  the  music.  The  production  sounds  very  professional  while  the  lyrics  cover  destruction  emptiness  and  rebirth  themes.

Posted by OccultBlackMetal at 12:26 PM No comments: