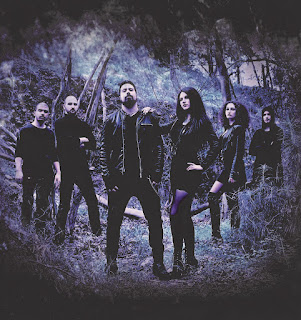 1. Hello everybody, we are Kosmogonia, we come from Greece and we play folk, melodic, death metal. Our name comes from the Greek word κοσμογονία (cosmogony= birth of the world). It is an ancient, pagan word that symbolizes the world’s creation and sacred harmony. Our music and lyrics are inspired by Greek and generally European mythology and history.

2.Recently you have released your first full length, musically how does it differ from your previous demos?
2. We started as a thrash, death metal band however, from 2017 we started playing folk metal. Our first album “Enthrone the gods” is the outcome of a three-year long journey which includes our first demos “Elysian fields” and “Triiris”.

3.A lot of your lyrics cover Greek Mythology, can you tell us a little bit more about your interest in this topic?
3. As we mentioned before, our music is inspired by the ancient, pagan Europe. “Enthrone the gods” has an ancient Greek theme which is a mixture of Greek mythology and ancient Greek historic moments. Ancient Greece is the perfect way for us, since we are Greek, to start our journey through the ancient world and its numerous civilizations.

4.What is the meaning and inspiration behind the name 'Kosmogonia'?
4. Kosmogonia which comes from the Greek word κοσμογονία (cosmogony) as we mentioned before, symbolizes the world’s birth and the power of renewal and these symbolisms are the key to our music. This word symbolizes our connection with the ancient world and its gods and goddesses through a “tool” and that tool for us is our instruments with which we give life to something new.

5.Can you tell us a little bit more about the artwork that is presented on the new album cover?
5. The album’s artwork (made by Cosmas Hiolos) has many symbolisms. The young lady symbolizes the rebirth of the ancient spirit while the eagle that flies behind her is eternal Zeus which symbolizes the return of gods to Mount Olympus. The volcanic background symbolizes rebirth.

6.What are some of the best shows that the band has played so far and also how would you describe your stage performance?
6. There have been plenty of lives in which we have participated in. We enjoyed all of them as much as our fans did and we believe that our presence on stage takes them on the journey that we do every time we play live.

7.The new album was released on 'Cronus Productions',can you tell us a little bit more about this label?
7. Cronus Productions is a freelance company founded by the members of the band and its goal is to help other metal bands come to the spotlight. It helped us majorly for our first album’s release.

8.On a worldwide level how has the reaction been to your music by fans of folk and extreme metal?
8. “Enthrone the gods” was a big success worldwide. We already have fans from many countries and we can’t wait to play live for them. The critiques around the world about the album are exquisite and we can’t thank everybody enough for their support!

9.Where do you see the band heading into musically during the future?
9. We hope that we continue to evolve as a band and as musicians and that is our goal. So far we thing that we’re going to that direction.

10.What are some of the bands or musical styles that have had an influence on your music and also what are you listening to nowadays?
10. Great famous bands such as Eluveitie, Esiferum and lots of others are a big inspiration for us. We listen to folk metal and other subgenre of metal music as well as neofolk music from many different European countries. For us, ancient civilizations are magical and we think that music may be the only way to travel there.

11.What are some of your non musical interests?
11. We like sports, reading and watching series and movies but of course we all have different tastes.

12.Before we wrap up this interview, do you have any final words or thoughts?
12. We hope that the corona virus pandemic ends in order for us to travel, meet our fans and play live for them. In conclusion, we would like to give our thanks to all of those who support us in every way possible as well as Dinos Lavrentakis from Woodstock Studios, Marinos Tokas and OGrego (Athanasios Karapanos) who worked hard for our album’s recording, symphonic orcestration, mixing and mastering respectively.

https://www.youtube.com/watch?v=XAJINgBopaU
Posted by OccultBlackMetal at 12:00 AM No comments: 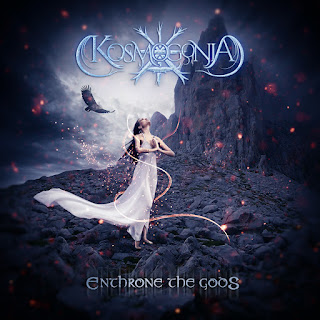