Hi everyone, 3xperimental is an expression of the musical ideas that come to my mind. I have been composing music for more than 15 years, mostly for myself, but eventually felt a desire to share the songs with a larger audience. The feedback has been great so far and it motivates me to keep exploring new ideas.


2.So far you have released 2 albums, musically how do they both differ from each other?

Each album follows a thematic concept, and this is partly reflected in the composition. The first album "Virtual World" tells a near future story, and is perhaps darker and a bit more industrial. The new release "Symphony of Elements" is more orchestral and progressive, with many organic sounds that represent Nature. But the major difference is the production. I learned a lot from the recording of the first album, and was also able to invest more into the second recording (hardware, studio time, sound engineer, ...). This led to a full professional production from start to finish, and overall a much higher quality of sound.


3.What are some of the lyrical topics and subjects you have explored so far with the music?

I think the overall subject of both albums is "Ending Worlds", whether it is on a global or more personal scale. The first album dealt with people who feel (rightly or not) that the world is ending and find refuge in virtual worlds. The new album discusses our place in Nature, and how little we are compared to forces that can end us all. I can already tell that the next album will continue to explore such themes !


4.I have read that you also had 3 concept albums that where never published, can you tell us a little bit more about it?

Some of these concepts were not mature enough to end up in an album, some will need a massive investment and involvement of many other musicians, both are not feasible at the moment. Let's say I have ideas and material for many other albums, and can't wait to get back to writing music, but for now I focus on my energy on the release of "Symphony of Elements" !


5.What is the meaning and inspiration behind the name 3xperimental?

Each song/album is an experiment. I don't want to restrict the music to a specific genre, and I try to introduce structural or melodic elements that may surprise the listener. For instance the whale song in "Water".

The artwork was done by Vini Hummel, a very talented artist. I explained to him the concept of the album (natural elements: earth, water, wind, fire) and let him come up with his own interpretation. I think his design is an awesome representation of the forces of Nature.


7.With the exception of a few guests you record most of the music by yourself, are you open to working with a full band or do you prefer to work solo?

I like to work alone on the songwriting, I usually have a very clear vision of what each song should be. I would love, however, to turn the project into a full band and would welcome contributions.


8.You also have a few guests on the album, can you tell us a little bit more about who they are and also their contributions?

My wife recorded the female backing vocals on a few tracks, and I hired another singer to perform the female vocals and opera lines in the song "At the End of the World". They add a lot to the album !


9.Currently you are unsigned, are you looking for a label or have received any interest?

I am looking for a label, and some discussion is happening. I hope to receive more interest once "Symphony of Elements" is out.


10.On a worldwide level how has the reaction been to your music by fans of atmospheric and symphonic black metal?

Excellent so far ! Despite almost no promotion for the first album, it got quite a few sales (even physical copies!) in Europe and the USA. The feedback has been very positive and motivating !


11.Where do you see yourself heading into as a musician during the future?

I would like the next album to incorporate much more synthesizers so this is definitely a direction I want to explore. I am also looking for session musicians who could support live shows.


12.What are some of the bands or musical styles that have had an influence on your music and also what are you listening to nowadays?

I listen to so many bands, so it's difficult for me to know what really influenced the album. The symphonic elements are certainly reminiscent of when I discovered symphonic metal in the early nineties with bands like After Forever, Rhapsody, or Nightwish. Nowadays I listen mostly darker metal bands like Behemoth, Mgla, The Project Hate. And Evergrey, my all time favourite for sad tunes. My hope is that fans will find many familiar elements in our new album, but also something completely new and exciting.

In my non-musical life I am a planetary scientist, so I am very much into space stuff ! I also love scuba diving, and the song "Water" reflects some of that. We should take better care of our oceans !

I hope you all will enjoy the album. Don't hesitate to get in touch via Bandcamp or Facebook !

Posted by OccultBlackMetal at 10:57 PM No comments: 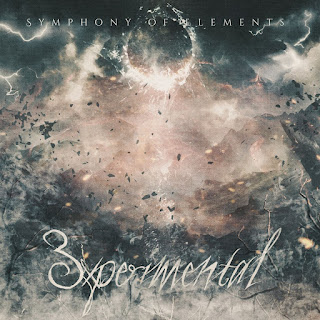 A  very  dark  sounding  intro  starts  off  the  album  while  also  introducing  synths  onto  the  recording  which  also  mixes  in  with  the  heavier  sections  of  the  music  at  times.  Melodic  choirs  can  also  be  heard  briefly  along  with  the  vocals  being  mostly  grim  sounding  black  metal  screams.

1. Bandcamp
2. Facebook
Posted by OccultBlackMetal at 1:25 AM No comments: