1,Can you give us an update on what has been going on with the band since the recording and release of the new album?
Fenrir: Right now we are concentrating a lot in the rehearsal room to play live. We have always been a studio band, and so we find ourselves playing together only now, despite having two albums behind us. We are refining the songs and adding a few more of those, while we ask for publicity and media spaces, looking for some interviews and sending some albums to get some more reviews. We already have the head in the third album and, ideas, in a still very approximate sense, already has its own written score.

2.In May you had released a new album, musically how does it differ from the stuff you have released in the past?
Gwyn: Certainly what is most striking is the orchestration: in the new album they are perhaps the most important part, even more than the guitars, and it is a sound that tends towards theatricality which wants to paint atmospheres. Nevertheless, this does not deprive Vereor Nox of his violence and its impact. The first cd is certainly more "classic": metal gets the fundamental part, it's a cruder cd, not in a negative sense, of course. The stylistic evolution between the two CDs is given above all by the change of formation; the only original member left is Fenrir while the composition and arrangement was passed to Gwyn. Let's not forget one of the fulcrums of the band: Seath on bass, which gave us some excellent counter-melodies on this album.

3.A lot of your lyrics deal with Paganism and Mythology themes, can you tell us a little bit more about your interest in these topics?

Gwyn/Fenrir Our approach to pagan/mythological figures is slightly anomalous, I would say. Our intent is to analyze and narrate the emotions, the suffering and the psychological experience of the characters we chose to describe beyond the music. The first album is in fact nothing but the representation of some mental pathologies through gods and mythological and folkloristic creatures; Vereor Nox, our eponymous new album, is no different. We investigated the stories and lore related to each character and in the end we chose seven Dark Souls bosses to set to music by turning their suffering and heartbreaking story into lyrics, song and sounds

4.What are some of the other lyrical topics and subjects you have explored over the years with your music?
Gwyn/Fenrir the contents developed by us are those that we have presented in Noli Respicere with the gods and in Vereor Nox with the world of Dark Souls. We are already working on the new album which will develop in a more "historic" context.
Unfortunately we cannot say more yet

5.I know that the bands name means 'night must be feared' in Latin, how does this name fit in with the musical style that you play?
Fenrir: I think the name Vereor Nox, literally "the night must be feared" is a great name for a black or death metal project. It undoubtedly describes perfectly the decadent and romantic atmospheres of the new album as well as representing the obscure sounds of Noli Respicere, our first cd.

6.Can you tell us a little bit more about the artwork that is presented on the new album cover?
Gwynthe cover of the new album represents humanity which, in the Dark Souls universe, is the object that allows the chosen undead to return human. Humanity is perhaps the main emblem of DS, which is the reason why we decided to use it on the cover of our concept, precisely because it is about DS.

7.What are some of the best shows that the band has played over the years and also how would you describe your stage performance?
Fenrir: The fun thing is that we have never played live since the project was born to be destined to be in the studio: we are working in the rehearsal room and we hope to start between November and December!

8.Do you have any touring or show plans for the new album?
Fenrir: Nothing certain. We would have some proposals between November and December but for now nothing is safe.

9.The new album was released on 'Earth And Sky Productions', can you tell us a little bit more about this label?
Seath: This label was born thanks to an idea of ​​Marian Robert Peron, a friend of ours who decided to call us to be part of his band roster. The Earth And Sky Production is one of those labels organized and structured as they should be: it is a label that bets on, invests and risks on the bands it wants with it. And this is what every label should do, while for several years the mechanism seems morbidly reversed. Therefore, the EASP has all our trust and all our support.

10.On a worldwide level how has the reaction been to your music by fans of symphonic, black and death metal?

Seath: The album was averagely appreciated and positively reviewed on several occasions, bringing together musicholics of extreme genres but also those who have a penchant for orchestrations and go beyond a purely creationist approach to the whole genre. In reality, it was scorned by those who appreciate the cruder and "primitive" part of this genre: in short, from those who are more connected to the old school. Honestly, after an initial disappointment, we have developed a thought: we do not want to tell anyone how a particular genre should be done, but the fact that the album was appreciated by those who do not set limits on the music implies a more genuine appreciation, according to us, and that is what makes us happier. We want to make music and not untie ourselves from extreme metal styles, but we don't want to start even with the fear of doing something that moves away from a prototype, for example, of symphonic death metal. Music is naturalness, in any form, and in any form it must grow spontaneously.
11.Where do you see the band heading into musically during the future?

Gwyn: The needs to evolve the style change from album to album, depending on the concept. The music in fact must be inclined to represent the concept and help the listener as much as possible to immerse himself in the story we are going to tell. Surely the style we want to carry forward can be framed as "cinematic black metal" or "black metal opera" and just as sure is our intent to improve the exhibition ability to create suggestive and hypnotic atmospheres. Projecting the listener into the music for us is everything.

Gwyn: As far as metal is concerned, certainly bands like Xanthochroid and Ne Obliviscaris are our main sources of inspiration, but let's not forget Summoning, Carach Angren, Sojourner and Agalloch. Of course classical music too is and remains a huge source of inspiration for us. Surely Wagner most of all influenced our orchestrations, but let's not forget the same OSTs as Dark Souls.
13.Before we wrap up this interview, do you have any final words or thoughts?
Seath, Gwyn,Fenrir: Always be yourself, see you on stage!

Posted by OccultBlackMetal at 4:59 PM No comments: 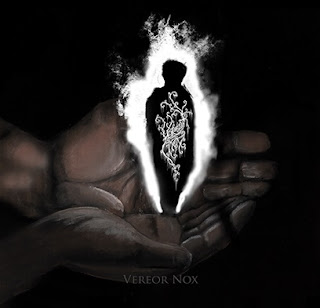 Posted by OccultBlackMetal at 5:29 PM No comments: