1.For those that have never heard of you before, can you tell us a little bit about the band?
1. The band started with me (David) wanting to write heavy music inspired by bands like Opeth, Cult of Luna, Yob, Emperor, and Neurosis. At first, I didn't know if this project would even become a band, I just wanted to write some songs, record them, and then make those recordings available for people to listen to. Fortunately, I was able to slowly, but surely assemble a group of talented guys who were eager to make their own mark on the material, and the end result exceeded my expectations. The band consists of me on guitar, Emmanuel on guitar/sax/vocals and assorted auxiliary instruments, Steven on bass/vocals, Trae on main vocals, Ben on guitar/vocals, and Dan on drums.

2.Recently you have released your first album, how would you describe the musical sound that is presented on the recording?
2. I feel that the sound encompasses everything that we as a group love about metal music. One of the goals was to create a mood, and I hope we accomplished that through the use of dynamics. We're all fans of music that takes one on a journey.

3.What are some of the lyrical topics and subjects the band explores with the music?
3. The main lyrical topics refer to inner/outer space, with the extrasolar planet WASP-18b being a particular subject of inspiration. That planet is spiraling towards it's host star, and should merge with it in about a million years. So the vastness of space is an obvious inspiration, but also the vastness of the ocean - that is our planet's inner space.

4.What is the meaning and inspiration behind the name 'Cetacean'?

4. The group was originally called 'Orcinus' after Orcinus Orca - the full scientific name of the Orca aka Killer Whale. I wanted the music to be the aural equivalent of that mammal - devastating yet elegant. We found there was another band called Orcinus, and we decided to change the name to Cetacean, which is the infra-order of marine mammals that includes whales and dolphins.

5. We haven't played any shows yet, but we do have one scheduled for March 5th, 2016 in downtown Los Angeles. We hope to achieve an intense and inspiring live performance.

6.Do you have any touring or show plans for the new album?
6. We have our record release show March 5th, 2016, and we're looking into some more shows for the spring/summer. As far as touring goes, we're looking into a short run up to the bay area (SF, Oakland) this summer.

7.The album was released on 'Apes Who looked Up Records', can you tell us a little bit more about this label?
7. Apes Who Looked Up is an independent label founded and run by our own Benigno Esau. It's intent is to produce and release ours and other friends projects under one banner. A musical family, so to speak, composed of people that have collaborated and known each other for a pretty long time and wish to see their output represented amongst other DIY contemporaries.

8.On a worldwide level how has the feedback been to your music by fans of black and sludge metal?
8. So far we've been receiving positive feedback. However, I don't believe we've had much exposure to metal fans outside of the United States yet. I hope that changes soon, and that those fans enjoy our material.

9.What is going on with some of the other bands or musical projects these days that some of the band members are a part of?
9. Emmanuel (guitar/sax/vocals) is part of the LA blackened death-prog band Exhausted Prayer, and they have recently completed recording a split with Burials, an amazing band from Portland, Oregon. (Swan - you want to add more details?). Daniel (drummer) has been recording with his bands Ancestors and Horse the Band, and Steven's other band The Elephant Parallax are wrapping up a recording as well.

10.Where do you see the band heading into musically during the future?
10. The next round of writing will be the first material that the whole band will be collaborating on. The three songs on Breach | Submerge were largely written by Me (david) and Emmanuel, with some help from Steven and all lyrics written by Trae (vocalist). The next batch of songs will be a much more collaborative effort, and I know Steve, Emmanuel and I already have a lot of song ideas waiting to be jammed on and fleshed out. Although we all love metal, we also have myriad other music influences, and we plan to draw upon those as well.

11.What are some of the bands or musical styles that have had an influence on your music and also what are you listening to nowadays?
11. Cult Of Luna and Opeth are probably the primary influences that inspired me to creat this project. However, there are a host of other bands that have been inspirational such as Intronaut, Black Sheep Wall (Trae's former band), Neurosis, Metallica, Megadeth, The Atlas Moth, Emperor, Krallice, Nachtmystium, Death Spell Omega, Wolves In The Throne Room etc...We've also been influenced by classic and modern jazz artists such as Christian Scott, Bill Frisell, and Kurt Rosenwinkel. Swan in particular has taken to Tuvan throat singing, and he does some of that on the track Outpour I.II.III.


13.Before we wrap up this interview, do you have any  final words or thoughts?
13. Thank you for taking the time to do this interview. We thank family and friends who have supported our endevour. I hope the readers of this zine enjoy our musical expression and are inspired by it.


Posted by OccultBlackMetal at 12:50 PM No comments: 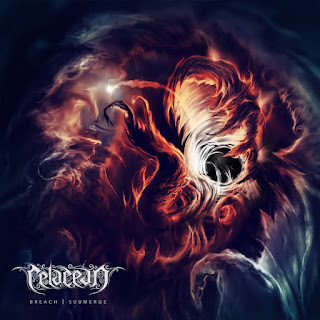 Cetacean  plays  a  musical  style  that  takes  black  and  sludge  metal  and  mixes  it  with  post  and  progressive  metal  to  create  a  musical  style  of  their  own,  the  production  sounds  very  dark  and  heavy  while  the  lyrics  cover  Cryovolcanism,  melancholy  and  resonance  themes.

http://thecetacean.bandcamp.com/
Posted by OccultBlackMetal at 4:06 PM No comments: