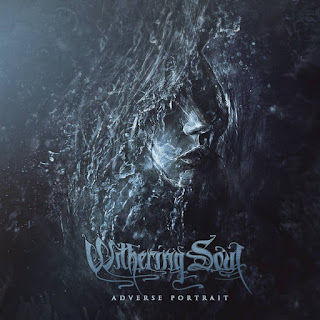 Avant  garde  sounds and  synths  start  off  the  album  along  with  some  melodic  guitar  leads  a  few  seconds  later  that  dominate  throughout  the  recording  and  after  the  intro  the  music  gets  a  lot  more heavier  while  still  using  melodies  as  well  as  adding  blast  beats  into  certain  sections  if  the  recording  and  grim  black  metal  screams.

Withering  Soul  creates  a  melodic  black  metal  album  that  also  incorporates  a  decent  amount  of  symphonic  elements  along  with  some  goth,  thrash  and  death  metal  influences  to  create  a  sound  of  their  own,  the  production  sounds  very  professional  while  the  lyrics  cover  Ghosts,  Horror,  The  Paranormal  and  Death  themes.

Posted by OccultBlackMetal at 2:00 PM No comments:

The last year we took a little break from playing live shows to take some personal time. It is only healthy for a band to “recharge”. That also gave me a chance to save up some money and upgrade my home studio. We’re rehearsing again full-time now, and we have about 8-9 songs almost ready for our next album, which I hope doesn’t take another five years to come out. *Haha*

2. How would you describe the musical sound of the new album?

We pretty much take in our favorite elements of different genres and melt it all down. On the surface, you would probably hear Symphonic Black Metal. But after listening to No Closure, you can hear other influences, whether it is the harmony and precision of Melodic Death Metal, the otherworldly atmospheres of Dark Wave, and even the upfront catchiness of Traditional Metal. We try to keep it diverse, but let it flow consistently all the same.

Our lyrical topics are basically a flipside of the norm. They cover subjects that many people are unlikely to discuss or engage in a conversation about. For example, there is much below the surface of the world we live in. We like to address themes and ideas that people tend to ignore and pretend are not there.

4. What is the meaning and inspiration behind the band’s name?

The name Withering Soul, for us, serves as a metaphor for the relationship between the present and the future. Living everyday can be a difficult struggle, but nobody really knows what comes next. While we are alive, we are constantly striving for something, but most never find it.

Playing direct support for Dark Funeral and Enslaved was definitely one of our proudest moments. It was an amazing bill and we had a very ecstatic crowd. Gothicfest 2005 was also a nice memory. I hope that every new experience becomes our best experience. Our performances have always been very animated and on the theatrical side. It’s a concept that we hope to expand on when we have a bigger budget.

6. Do you have any touring plans for the new releases?

We’re looking into some possible tours for later this year, but also with a focus on getting on a few festivals. However, nothing has been confirmed at the moment.

7. Currently you are signed to Mortal Music, how did you get in contact with this label and how would you describe the support that they have given you so far?

The founders of Mortal Music took an interest in us years prior, and paid attention to what we were doing. When we recorded No Closure and gave them a demo copy, they liked what they heard and the discussions began. The support has been phenomenal, and they have opened up opportunities that we did not have before. We’re extremely happy to be a part of the Mortal Music family.

8. On a worldwide level, how has your music been received by symphonic black metal and melodic death metal fans?

I gotta say that our fanbase is pretty diverse. Our music is versatile enough that we have been able to share the stage with many different types of bands…anywhere from Gore Grind to Goth. The overall response has been very positive. We’re just going to keep making the type of music that we enjoy and hope that more will appreciate it.

9, Are any of the band members currently involve with any side projects, or is this a full time line-up?

Mykil and I actually had been tinkering with an Industrial side project called “Psyclone”. Kind of a futuristic and gritty electronica mixed with heavy guitar riffs. That project has been put on hold to focus our efforts on WS. Perhaps it will be revived in the near future, when we have some down time.

10. What direction do you see the music heading into on future releases?

I think our style of music will stay pretty consistent for now, with the exception of a few unexpected twists. Our fans can expect every album that we write to sound like a Withering Soul album, but we will try to keep it fresh and interesting.

11. What are some bands or musical styles that have influenced your music, and also what are you listening to nowadays?

We try to expand our tastes as much as possible, however for me personally, my heart will always belong to Metal. As a kid I grew up on the classics, such as Black Sabbath, Slayer, Maiden & Metallica. In the mid 90’s, I eventually shifted over to the European/Death Metal scene. Bands like My Dying Bride, Morbid Angel, Emperor, and Carcass really opened my mind to the darker and extreme variety. As for Non-Metal, I’ve recently been listening to a lot of Porcupine Tree, The Birthday Massacre, and Wojciech Kilar. I lump most of my music into two categories; good & bad.

12. What role does the paranormal and occult play in your music, and how would you describe your views on these topics?

It is pretty much the foundation of our music. When developing our lyrical content, we wanted to write about darker natured themes, but we didn't want to focus on religion as much per se. We want our music to be entertaining as well as intriguing. We've all grown up on good old-fashioned ghost stories. I’m not going to testify that I have had any direct experiences myself, but I've taken the thrill of visiting allegedly haunted locations before, and must say that they are fun to explore if you’re a History buff like me. We're also a bunch of book worms when it comes to that stuff. It's a morbid fascination that I don't think I'll ever grow out of!

13. Outside of music, what are some of your interests?

My girlfriend and I like to travel. So far, it has been mostly modest vacations and road trips to obscure destinations in the US. Door County, WI, is a beautiful place to visit during the summer and it is very affordable. I usually enjoy simple pleasures, such as jogging outdoors (which I can’t really do much in the winter) and cooking. I’ve found out that (almost) everything tastes good when you add garlic.

Thank you for conducting this interview and we look forward to hearing from you again. Cheers!

Posted by OccultBlackMetal at 5:13 PM No comments: 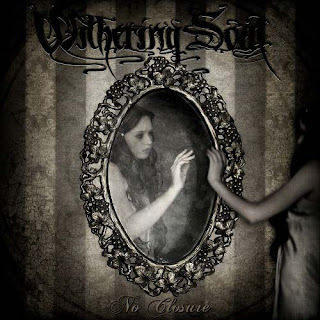 Withering Soul are a band from Chicago, Illinois that plays a very symphonic form of black metal mixed with melodic black/death and this is a review of their 211 album "No Closure" which was released by Mortal Music.

Drums range from slow, mid paced to fast drumming with a lot of brutal blast beats, while the keyboards are very atmospheric and atmospheric sounding,as for the bass playing it has a very dark tone with riffs that follow the riffing that is coming out of the guitars and at times they sound very powerful.

Vocals are mostly high pitched black metal screams mixed in with some deep death metal growls and some clean singing mixed in with a short use female vocals, while the lyrics cover Ghosts, the Paranormal, and Horror, as for the production it has a very professional and heavy sound to it.

In my opinion Withering Soul are a very good melodic, gothic, symphonic black metal band, and if you are a fan of this style, you should check out this band. RECOMMENDED TRACKS INCLUDE "Phantasmal Chaos" "Sadistic Redress" and "Lifeless They Lie". RECOMMENDED BUY.


www.witheringsoul.com
Posted by OccultBlackMetal at 7:24 PM No comments: