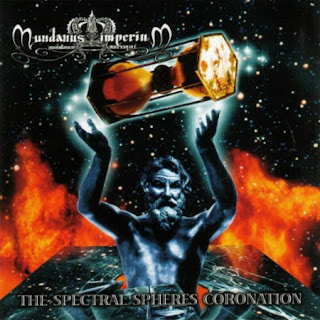 Mundanus Imperium where an avant garde melodic black metal band from Norway and this is a review of their album "The Spectral Sphere Coronation" which was released by Nuclear Blast Records.

Drums are mostly slow to mid paced parts with no fast playing or blast beats, while the keyboards are very symphonic and atmospheric sounding with some classical influences with some hard rock influences, as for the bass playing it is all rhythm bass that follows the riffs coming out of the guitars and they have a very powerful sound at times.

Rhythm guitars are mostly slow to mid paced riffs that I would describe as avant garde metal with a symphonic black metal feel and there are also a lot of influences from 80's metal/hard rock, lead guitars when they are utilized are mostly melodic sounding guitar solos.

Vocals are all clean singing hard rock/metal vocals with no growls, while the lyrics are mostly about space and cosmic stuff, as for the production on this album which was recorded and mixed at Studio Studio in August of 97 sounds very professional and you can hear all of the instruments that are present on this album.

In my opinion Mundanus Imperium where a very underrated band that did not get that well known because of the vocals, if you are an open minded fan of avant garde metal you should check out this band. RECOMMENDED TRACKS INCLUDE "Distant Conglomeration" "Starwars" and :If The Universe Transformed". RECOMMENDED BUY.

Posted by OccultBlackMetal at 3:46 PM No comments: