1. Can you tell us a little bit about the band for those that have never heard of you before?
Dissension is a five piece band composed of a vocalist/ guitarist, lead guitarist, drummer, bassist and keyboardist- just to be clear so as to not be mistake with an acoustic black metal band hahaha (not that there is anything wrong with that). We also enjoy red beer and long romantic walks along the beach, you know nothing too crazy.

2.How would you describe your musical sound?
We are a band that likes to experiment with a lot of different sounds and likes to take advantage of metal’s capacity to incorporate and dominate different kinds of music. With that in mind, the many people who have commented on our music see it as a hybrid mix between black, thrash, power and melo-death metal. Now, we are not pretensious enough to claim that our music is unparalleled in the whole cosmos and we don’t fit into any genre. It’s just difficult to place us hahaha. Beyond that, we really like to take the listener to sometimes very epic heights and then to the dark depths. It’s the balance between the two that we like to play on as for us, our songs are like stories, and the music reflects the movements within.

3. What are some of the lyrical topics and subjects the band explores with the music?
Well thematically we noticed that a lot of our songs deal with death. This is why we chose to name our album after our song Of Time and Chronic Disease. What we are trying to convey with this the idea that in an world that is godless death represents a final and absolute end, that is eternal and dark. Our lyrics then tend to represent this aspect of human reality that eventually death finds all living things and what humans do in the face of that reality. Some despair, some triumph, and some fall into delusion, and it is this very human reality that we like to deal with.

4. The band was originally called Set To Kill, what was the decision behind the name change and how would you say the music evolved since those days?
Well firstly, Set To Kill was somewhat of a retarded band name hahaha. We made it up when we were sixteen and first starting the band. When we had a bit of a lineup change, our bassist stepping down from vocals duties and our rhythm guitar playing taking his place, we also saw that the band was maturing and so we decided for a name change. Also,. There was this shitty emo band named Eyes Set To Kill and well, we hated the affiliation!

5. What is the meaning and inspiration behind the name Dissension?
Dissention was a song of ours (however we spelt it with a T) and it was a favoured song of ours at the time so we chose to name ourselves accordingly.  Dissenstion spelt with a T means literally going down. However, when spelt with an S, thus Dissension, it denotes something a little more diabolic as the word dissension means violent disagreement in a political or social sense. For example, an anti-capitalist riot is dissension within the capitalist system. Now, when Satan rebelled against God, this was also a form of dissension, and so in taking on this name we place ourselves in that satanic light. Of course we can go on into a discussion about Satanism and what that means, but the way we like to see it is that you rebel against something, you fight for an idea, even if there is no possibility of victory because winning is not the point, its rather just the fact that you fought despite knowing the inevitable outcome.  And this of course ties back into the reality of death. It’s something we all must face and if you just through in the towel saying, oh well I’m going to die anyways might as l live like shit, then that is defeat. Rather, living in a way that defies death even if it cannot be achieved, that is heroic, And so, with that in mind, we called ourselves Dissension. It’s the dissension against death.

6.What are some of the best shows that the band has played so far and how would you describe your stage performance?
Well for our sound it’s always best to play in bigger and louder venues. Thus our show at Heavy MTL was definitely one of the most memorable at we had a massive stage, all the  room in the world to run around, a fucking excellent crowd and a great sound to go with it. For a band that’s used to playing bars, a big stage performance is something we had always dreamed of. We also played the Wacken Metal Battle Canada finals in Toronto on another massive stage (the Opera House) and just to see a crowd who had relatively no idea who we were react so well to us was a great honour. Also, as I side not, we loose our fucking minds on stage, falling into somewhat of a religious ecstasy when we play (which sometimes has hilarious consequences), and a microphone attached to a animal skull decorated battle axe sometimes makes an appearance.

7. Do you have any touring or show plans for the future?
Those are definitely in the works. Once we play our album release show on September 9th at Les Founes Electriques (an excellent venue) we plan to do some out of city gigs along with as many shows as we can during the winter with possibly a summer tour. But we shall see.

8.The new album came out on Blk Coq Musik, how did you get in contact with this label and how would you describe the support they have given you so far?
Our glorious manager Pedro Barbossa started Blk Coq records, and he has been with us for several years. So naturally when he created the label, we hoped on. It has only been around for a few months its still in its infancy, but we hope to see its grow and expand into something huge.

9.On a worldwide level how has the feedback been to your music by fans of underground metal?
We haven’t released the full album yet, that will be on September 10th. We shall see the worldwide feedback then. For nor, our single Of Time and Chronic Disease is released and its getting some great reaction. For a Montreal band, we didn’t expect the positive reaction and support we have thus far been getting. Yet even before this release we have had proposals to go to Europe and what have you, all we need now is the cash to do so. So come support!

10.What direction do you see your music heading into on future releases?
On a music standpoint we already have a shit load of material building for another album. And so the direction is really upwards as we have played a few of these new songs live and they have gotten excellent reactions. We are always trying to incorporate different aspects into our music, but certainly shit will get darker as we grow music wise. We are also all in this for the long haul and we would like to see our band take off in a bigger way.

11.What are some bands or musical styles that have influenced your music and also what are you listening to nowadays?
Certainly Children of Bodom, Death, Dimmu Borgir are bands we all listen to. However what good about or bands is that each member listens to shit very different from the other so while our Keyboardist and drummr are into a lot of tech-death, our guitarist and vocalist are heavily into black metal while we have a jazz bassist hahah. So the list would be long. But lately, we are all waiting the new Behemoth album, we all like Ghost, Amon Amarth (great new album), the Faceless, Dissection, Watain (not decided on their new album) to name a big few.

12.Outside of music what are some of your interests?
Most of our guys are in school studying various shit. Our lead guitarist Conti is in History, or Keyboardist is a an evil Chemist while our vocalist (me) is studying religion.

13.Any final words or thoughts before we wrap up this interview?
Thanks for the chance to have us spill our load the blog! Also our album launches September 10 worldwide, we have a promotional show for it on the 13th, so if anyways wants to write nasty shit on our facebook and click the fuck you button next to the attend button, it would be very much appreciated!
And of course, we must hail Satan. 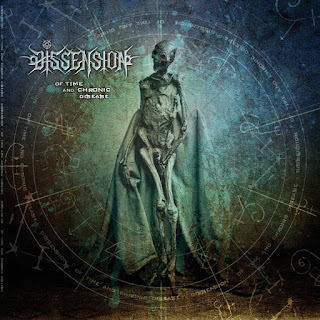 "Thralls  To  The  Crucified"  begins  with  some heavy  guitar  riffs,  drums  and  symphonic  keyboards  before  going  into  a  faster  direction  and  adding  in  some  blast  beats  which  leads  to  some  melodic  guitar  riffing  and  black  metal  screams  while also  keeping  the  heavy  and  symphonic  elements  and  after  awhile  there  is  a  brief  use  of  melodic  guitar  leads  as  well  which  come  in  and  out  as  some  thrash  influences  being  thrown  into  the  music,  after  awhile  you  can  hear  some  powerful  bass  playing  coming  in  for  a  few  seconds.

"Graceless  Death"  begins  with  some  thrash  style  guitar  riffs,  drums  and  spoken  word  parts  before  going  into  a  faster  direction  and  adding  in  blast  beats  and  black  metal  screams  which  leads  to some  keyboards  and  melodic  riffing  while  also  remaining  heavy  at  the  same  time  as  well  as  switching  back  and  forth  between  slow  and  fast  parts  and  after  awhile  you  can  hear  some  powerful  bass  playing  which  leads  to  some  melodic  guitar  solos  while  keeping  the  rhythms  and  symphonic  elements  around  which  leads  to  the  music  going  more  into  a  thrash  direction.

"Set  To  Kill"  begins  with  some  drums,  keyboards  and  melodic riffing  before  going  into  a  heavier  direction  and  adding  in  the  screams  while  also  keeping  melodic  and  symphonic  elements  around and  after  a  couple  of  minutes  guitar  leads  start  kicking  in  briefly  and  mixing  with  the  rhythm  parts.

"Of  Time  And  Chronic  Disease"  begins  with  some  soft  acoustic  guitar  playing  and keyboards  which  leads  to  some  heavy  guitar  riffs  and drums  while  also  remaining  symphonic  and  adding  in  some  screams  and  after  awhile deep  death  metal  growls  start  kicking  in  and  as  the  song  moves  on  its  goes  into  a  faster  direction  along  with  some  blast  beats  and  guitar  solos  before  going  into  a  slower  direction  with  some  powerful  bass  playing  but  keeping  the  solos  around  which  leads  to  the  music  switching  back  and  forth  between  the  slow  and  fast  parts.

"Apoetheosis" begins  with  heavy  guitar  riffing,  melodic  leads  and  drums  which  lead  to  some  screams  and  after  that  the  music  goes  more  into  a  heavy  and  symphonic  direction  along  with  a  brief  use  of  deep  growls  while  also  keeping  the  screams  around  and  as  the  song  moves  on  guitar  solos  start  kicking  in  for  awhile  and  mixing  with  the  riffing  and  drums  as  well  as  going  into  a  cleaner  direction  along  with  some  powerful  bass  playing  before  getting  heavy  again  and  adding  in  some  symphonic  elements.

http://youtu.be/MSwsB05TCeI
Posted by OccultBlackMetal at 11:16 PM No comments: