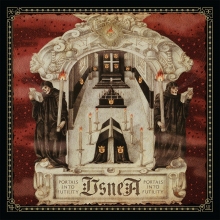 Dark  yet  melodic  riffing  starts  off  the  album  along  with  some  clean  singing  vocals  and  chants  a  few  seconds  later  which  also  leads  to  more  of  a  heavier  funeral  doom  metal  direction  while  the  vocals  bring  in  aggressive  sludge  style  screams  and  death  metal  growls  are  also  used  at  times.

Usnea  creates  another  recording  that  remains  true to  the  blackened  mixture  of  sludge  and  funeral  doom  metal  from  previous  releases,  the  production  sounds  very  professional  while  the  lyrics  cover  dystopian  and  science  fiction  themes.

http://www.facebook.com/usneadoom
Posted by OccultBlackMetal at 9:33 PM No comments:

The new album just came out today, which is really exciting. We have a record release show in the works for next month and we're working on Spring touring plans. Nothing final yet, but next year we're hoping to do some US as well as European touring to support the album.

2.Recently you have released a new album, how would you describe the musical sound that is presented on the new recording and also how does it differ from your previous split and full length?

I think our new album definitely is a progression from our last. Musically the same elements are there, but this album feels much more to me like a complete album whereas our first album was four songs that didn't all fit together as well since they were our first output as a band. The new album also shows some differing influences and ideas for us. Vocally we tried some different things: Joel's vocals are much deeper on this album and they came out amazing. And Justin has a few soft singing parts that really add an excellent contrast to the music. There are other things too: more death-doom style parts, things like that. As a band we are constantly evolving and trying out new ideas, so I expect each album will do will be a bit different. We also put out a split 7" this year with a shorter song for us and something that wouldn't have really fit with what's on this album, so it was the perfect spot for that song.

3.What are some of the lyrical topics and subjects the band explores with the newer music?

The name of the album, Random Cosmic Violence, comes from a Carl Sagan quote: “It is a characteristic conceit of our species to put human face on random cosmic violence.” We are not the creation of some benevolent being or divine inspiration. We are here because of a random series of events that occurred over millions of years. I think that idea is beautiful in its own way and that was what Carl Sagan was really good at conveying - the beautify of the natural universe and the chance that brought us here. In contrast, our society goes to war over dogma, kills over religious ideology, destroys the environment. So our lyrics explore some of those juxtapositions and I suppose we focus a bit on some of the negativity of the random human experiment. As as species what are our conceits, what insanity moves us to do certain things.

4.On the fb page you had some horror and science fiction authors along with a few philosophers listed as influences, can you tell us a little bit more about your interest in these topics?

A lot of the ideas in science fiction shed some light on what it means to be human, what we could become given the best and worst of choices and circumstances. So I see a connection there between some science fiction and philosophy - they both can inform our perspective of what we are as a species.

5.What is the meaning and inspiration behind the name 'Usnea'?

Usnea is the name of a lichen, which is actually pretty common up here in the northwest and is nicknamed "Old man's beard". We were trying to come up with a name for the band and coming up with all kinds of ideas. I was looking at lists of names of plant tinctures and I saw that and it just instantly fit. As far as I know, there aren't any other bands named Usnea so that's a plus. And the word has a sort of mysterious sound to it which fits out music well. And its local to our area with medicinal properties, so that's pretty cool as well.

I think my favorite show as a band so far was with Yob here in Portland. They are such an incredible band that we look up to that we were humbled to be able to share the stage with them. Also the nicest guys you will ever meet. Mike wore our shirt when they took the stage that night which was pretty incredible, he is such a caring dude, it's hard not to be awed and inspired by his presence and amazing music.

As for our stage performance, playing in a slow doom band is a bit funny. It's not the sort of thing where you're going wild, head banging like crazy, getting the crowd wound up. Live we really just try to project the music and the energy it brings - whether it's a meditative, introspective feeling or a sort of angry, cathartic feeling. Music is meant to make you feel, so that's what we try to convey; if the crowd felt the music, then we succeeded.

7.Do you have any touring or show plans for the new release?

We have a record release show scheduled in Portland for December 13th, and we're going to follow that up with a tour this Spring. We'll announce more soon.

8.A few months back you had released a split with 'Ruins', how would you compare their musical style to yours?

Ruins are a great band and awesome dudes. Their music is pretty different than ours for sure but I think that makes the split interesting and I think what we do is very compatible with each other. Some of my favorite shows are those with a diverse lineup. No one wants to see a show with four funeral doom bands unless you're a total masochist. So I think it's rad to mix it up a bit, within reason of course.

9.On a worldwide level how has the feedback been to your newer music by fans of black metal, doom and sludge?

The feedback we've gotten has all been really positive and sometimes overwhelming. I'm curious to see the reaction to our new album since it should be hitting a few more ears than the last. And although we've sold a few dozen records overseas, shipping costs these days are prohibitive. So I'm stoked that more people overseas will get to hear our new album and get the vinyl. And we will be there ourselves in not too long, playing the songs, so that's exciting too.

10.Are any of the band members involved with any other musical projects or bands these days?

None of us are doing much else really. We all have little projects here and there but Usnea is definitely our focus.

I see Usnea heading down the same track we always have: constantly evolving, getting excited about new influences and ideas, etc. I don't see our sound changing much, but as I mentioned before, I think each album will be a little different than the last and I'm excited to see where this journey takes us. I really have no clue what will be the inspiration for our music several years down the road and that's pretty exciting.

Some favorites of mine that have had a big influence are Yob and Neurosis. As a band we all like a great variety of music, but for this project are obviously focused on creating doom metal. In the context of that, we are free to pepper it with other ideas and create our own unique take on the genre.

13.How would you describe your views on Occultism?

The occult is a dark and weird entity and so it has an appeal and draw to non-mainstream folks and a strong foothold in metal for sure. At the very least, occult themes are an interest in the art that Justin does for the band, and because of our influences lyrically from horror and sci-fi a la Lovecraft and others, the occult finds it’s way in to our aesthetic that way. To be honest though, we are all skeptical critical thinkers and none of us really have any kind of spiritual connection to the occult or any religious thinking at all really.

When we're on tour we often play chess and this last tour we had some epic late night games of Carcassonne going.

Thanks for the interview!

Posted by OccultBlackMetal at 11:33 AM No comments: 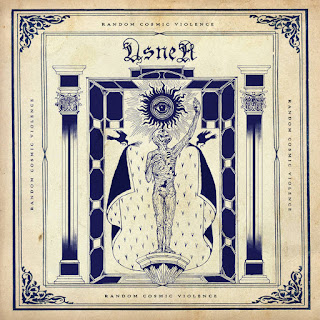 Dark  sounding  ambient  drones  start  off  the  album  along  with  some  psychedelic  noise  elements  and  after  awhile  the  music  goes  into  a  very  slow  and  heavy  funeral  doom/sludge  metal  direction  along  with  some  high  pitched  black  metal  screams  and  death metal  growls  and  you  can  also  hear  a  decent  amount  of  dark  sounding  melodies  in  the  bands  musical  style.

Usnea  plays  a  very  heavy  style  of  sludge  that  brings  in  the  heaviness  of  funeral  doom,  the  occult  atmosphere  of  black  metal  and  the  darker  side  of  death  metal,  the  production  sound s very  dark  and  heavy  while  the  lyrics  cover  darkness,  occultism  and  dystopian  themes.