1.Can you give us an update on what has been going on with the band since the recording of the new album?
First after finishing the music we had to take care of the artwork. To us that is important as well. And then of course we had to spread the news for we were absent for quite some time. Now we are really looking forward for the release and what feedback there might come.

2.You have a new album coming out towards the end of May, how would you describe the musical sound that is presented on the recording and also how does it differ from the stuff you have released in the past?
We describe it as black metal with symphonic and melodic side. Musically guitars are now more of a central point and synths got a bit more to the background. We gave more weight and attention to lyrics than on earlier recordings for they are all in written in german, no more mixed with english like before.

3.This is your first album in 12 years, can you tell us a little bit more about the decision to get back together after a very long hiatus?
In 2012 there should have been the release of a forth album entitled "wie Licht nur dunkler". But we couldn't find any label or distributor that was interested in releasing it and finally the band went to the break and the album was put away. But even during that break we never turned away from music for we cannot let it go. Each one did his own thing be it alone or in other formation. Because we have a recording studio of our own we then thought that we could as well do something together again.

4.What are some of the lyrical topics and subjects the band explores with the newer music?
What you can read in some preview of the album: "With lyrical themes encompassing everyday problems, an ongoing lack of humanity, and the control that wrath has over a person, the band works collaboratively to write music that truly resonates with listeners" is very true we think. We are getting older and think more about what is happening to the world in a critical way. It somehow mirrors human an social thinking nowadays.

5.Originally the band was called 'Culture Shock', what was the decision behind the name change and also the meaning and inspiration behind the name 'Majesty Of Silence'?
Well, Culture Shock was back when we were about 13 years old, we barely remember that. In 1994 the band was renamed for the first time to "Parsley" and in 1997 again, for spice wasn't that representing anymore for a metal band, to "Majesty of silence".

6.What are some of the best shows that the band has played over the years and also how would you describe your stage performance?
Our best show was in a well known location called "Z7" where many bigger bands stop by in Switzerland when touring. But at that time we where only thre members so we couldn't perform so well. When we were four we had some more show-potential but we were mostly playing at smaller venues where possibilities for special show effect were not so good.

7.Do you have any touring or show plans once the new album is released?
We did thnk about playing live shows but at the moment we are just two and to play live we'd need at least a drummer. Let's see if there is a demand for shows when the album is out.

8.On a worldwide level how has the feedback been to your recordings by fans of black metal?
Our two first releases were self produced and slef distributed so there was not so much feedback from abroad about them. With the third album "Lichtsille" which was istributed worldwide there was quite some good feedback with mailings from listeners from the US, Cuba and Korea to name a few. For the coming album resonance is already quite big which of course makes us very happy.

9.Where do you see the band heading into musically during the future?
We unfortunately don't have a crystal ball that tells the future let's wait and see what's to come when the album is actually out. For sure we'll stick with doing music anyway as long as we having fun making some but there is no pressure for nobody relies on us.

10.What are some of the bands or musical styles that have had an influence on your newer music and also what are you listening to nowadays?
We like listening to unknown bands and new stuff but if we need to tell some big names they are for sure Dimmu Borgir, Cradle of Filth and Immortal as well as In Flames, Nightwish and Sonate Arctica. But also music movie soundtracks and classic music influences us.

11.Does Satanism or Occultism play any role in your music?
No, definitely not. There is enough talking and arguing about religion going on and there are also enough opinions out there. We actually think it is quite boring to sing about it too.

12.What are some of your non musical interests?
When we're not doing music ourselfs we are visiting concerts of other bands. But we too are collectors, video games and guitars are in focus mainly. But most of our free time goes for doing music ourselfes..

13.Before we wrap up this interview, do you have any final words or thoughts?
We'd like to say thank you for being interested in what we do. We wish you a lot of fun listening the album and all the best.

Posted by OccultBlackMetal at 5:24 PM No comments: 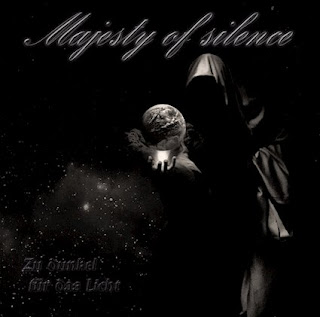 Majesty  Of  Silence  plays  a  style  of  black  metal  that  it  is  very  melodic  and  symphonic  sounding  along  with  son=me  goth  influences,  the  production  sounds  very  professional  while  the  lyrics  are  written  in  Swiss  and  cover  darkness  themes.