Birth Of The Monolith Interview

1.For those that have never heard of you before, can you tell us a little bit about the band?
1. We're - Birth Of The Monolith. We play post-metal / post-back / sludge music in the cold heart of Siberia, Russia. Gathered together in 2016, released 2 EPs since.

2.So far you have released 2 ep's, musically how do they differ from each other?
2. The first EP "S/T" has more sludge/doom sound, while second one, "Cult", is more inclined towards post-black. Lyrics on both releases are immersed in atmosphere of gloom and despair, and there're references to works of H.P.Lovecraft also.

3.Your lyrics cover Occultism and Rituals and the logo also has a Thelema symbol, can you tell us a little bit more about your interest in the esoteric arts?
3. We always liked occult literature, its thoughts and ideas. For example, the works of A. Crowley, "Kibalion", etc. As for the hexagram (the Thelema symbol) in our logo, it was an excellent replacement for the pentagram, which is a sort of stereotypical symbol for metal music.

4.What is the meaning and inspiration behind the name 'Birth Of The Monolith'?
4. The name of band was born under the influence of Robert Howard's Black Stone, which included The People of The Monolith.

5.Can you tell us a little bit more about the artwork that is presented on the ep cover?
5. The cover of the first EP was inspired by the work of artist Valnoir Mortasonge. The second is Jeff Grimal.

6.What are some of the best shows that the band has played so far and also how would you describe your stage performance?
6. As you know, Russia and Siberia in particular are very large, so all our shows are still held in Siberian cities. It is difficult to single out any show, but it is worth noting that recently we have changed the visual appearance - the members of the group perform in the clothes of cult followers, which further immerses the audience in an atmosphere of darkness. Such a change in appearance definitely pleased the audience, we received a many positive feedbacks.

7.Do you have any touring or show plans for the future?
7. So far, plans for shows in Siberia and in the Russia in a whole. Huge distances limit us, but nothing is impossible)

8.Recently you covered a 'Downfall Of Gaia' song, what was the decision behind doing your own version of one of their songs?

8.'Downfall Of Gaia' really influenced our music, and their footprints are also in our other tracks :) We were torn between two of their songs - In The Rivers Bleak and Ephemerol. The choice was not easy but, in the end, In The Rivers Bleak seemed more suitable to us :)

9.Currently you are unsigned, are you looking for a label or have received any interest?
9. Actually there were some offers, but none are really interested us. So, at the moment we're in search of proposal we couldn't refuse.

10.On a worldwide level how has the reaction been to your music by fans of black, sludge and post metal?
10. We haven't faced negative or devastating reviews yet. And, honestly, we were really pleasantly surprised by many good, positive foreign reviews, despite that our songs are in Russian. Although our lyrics are also available in English. We try to add local flavor to songs through the language. Hope we succeeded well, and our music will stay in listeners hearts for a long.

11.When can we expect a full length and also where do you see the band heading into musically during the future?
11. We are currently working on the next release. Part of the material is ready, another part is at the writing stage, the concept and topics have been already worked out. The songs are writing long enough (the latter one took more than half of a year), and we hope that it is worth it. The release is scheduled for 2020, but we would not like to rush things. After the release, we want to arrange a short tour in Siberia. The release will be available at https://botm.bandcamp.com and probably published as a limited edition on physical media.

12.What are some of the bands or musical styles that have had an influence on your music and also what are you listening to nowadays?
12. As we said earlier, our music is heavily influenced by Downfall of Gaia. Also Cult of Luna, Amenra, Black Table, it's not the complete list, just major ones. Currently in playlist are: latest releases from Cult of Luna and Mgla, The Ever Living, The Ocean.

13. Actually we're all different. Each has own hobbies besides music. For instance, our guitarist is fond of electronics and making guitar effects pedals, drummer - owns craft-beer pub

14. First of all, thanks for the questions:) Listen to Russian music, there're alot of interesting black-, post-, post-black metal and dark-hardcore bands. Hope you'll like our music :)

Posted by OccultBlackMetal at 12:06 AM No comments:

Birth Of The Monolith/Cult/2018 EP Review 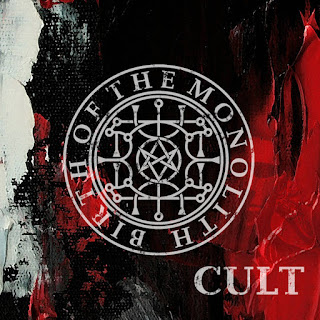 Birth  Of  The  Monolith  plays  a  musical  style  that  takes  post  black  and  sludge  metal  and  mixes  them  together  to  create  a  sound  of  their  own.  The  production  sounds  very  professional  for  being  a  self  released  recording  while  the  lyrics  cover  Occultism,  Rituals  and  Darkness  themes.

https://botm.bandcamp.com/album/cult
Posted by OccultBlackMetal at 11:29 AM No comments: