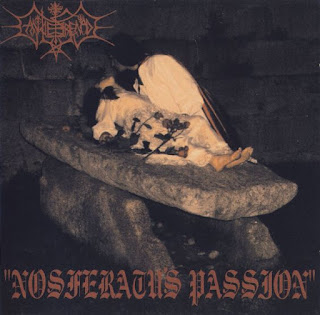 Candle Serenade where a band from Portugal that played a melodic style of gothic black metal and this is a review of their 1995 album "Nosferatu's Passion" which was released by Guardians OF Metal Records.

Drums are a mixture between slow and fast playing with some brutal blast beats being utilized at times, while the keyboards have an atmospheric pagan/gothic feel mixed in with a small amount of flute, as for the bass playing it has a very powerful that dominates throughout the album with a mixture of slow and fast riffs mixed in with some bass leads.

Rhythm guitars have some slow riffs that are heavily influenced by doom metal while the mid paced and fast riffs are black metal with a good amount of melody, while the lead guitars are distorted sounding guitar solos that have a very dark metal sound to them.

Vocals are high pitched black metal screams with some clean singing female vocals being used at times, while the lyrics cover Celtic Paganism and vampirism from a left hand path point of view, as for the production on this recording it has a very raw yet professional feel that captures all the instruments.

In my opinion Candle Serenade where a very underrated band for their time and if you like atmospheric black metal with a doomy edge you should check this band out. RECOMMENDED TRACKS INCLUDE "Celtic Lir's SONS (Sab Erin's Legrnd" "Balakian Rider" and "Transylvanian Mistress". RECOMMENDED BUY.

Posted by OccultBlackMetal at 7:11 PM No comments: