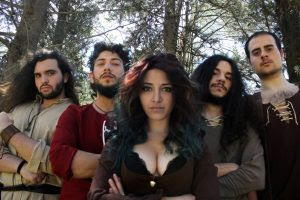 1.For those that have never heard of you before, can you tell us a little bit about the band?
1 - The band was born in Bari in 2015 from the idea of ​​Zaira and found its stability only in Jenuary 2017 with the final line up. Our music is labelled as Folk Metal but we introduced a lot of contaminations like Death, Melodic and Celtic elements. KormaK do not play just music but try to completely immerse the listener in what they tell.

2.You have your first album coming out this summer, what are some of the things you feel you have accomplished musically on the album?
2 - The release of this album is a very important milestone for us. Zaira created a work of art that could be considered mad from certain points of view; we musicians performed and reproduced as faithfully as possible what she wanted and the result is an album that has a logical sense and that we think listeners might like!

3.What are some of the lyrical topics and subjects you explore with the music?
3 - The album examines and amplifies the concept of madness brought by the loss of someone (or something), for this reason the texts recall personal events transcribed in a cryptic way. There are Celtic melodies that evoke moments of deep introspection while the most violent parts tell about battles against real or unreal enemies, that often turn out to be ourselves. The key to read Faerenus is the absolute madness.

4.What is the meaning and inspiration behind the name 'KormaK'?
4 - KormaK is a character of the fantasy literature (Kormak's Saga) whose purpose in life is to payback of some wrongs, and reborn as a man and a hero. As we are all lovers of fantasy, we have captured the essence of this character making him our starting point for everything that the group is and will be.

5.What are some of the best shows that the band has played so far and also how would you describe your stage performance?
5 – We played as band from March 2018, that is to say not enough time to perform. Nevertheless we remember with pleasure our first live, made in our land (Puglia), in which we had an unexpected positive response. In the same way, even a recent live left us ecstatic when, during the performance of one of our songs, the public began to sing with us. On stage we try to recreate the same atmosphere of the album, passing from classical and extremely relaxing melodies to very violent parts in pure Death Metal key.

6.Do you have any touring or show plans once the album is released?
6 - Of course. On June 30th, the day after the release of the album, we will be part of a big concert in our region, that it will be our "release party", afterwards we will move through Italy in the month of July. From September to November we will be busy with the "Faerenus European Tour" in which we will have some dates in other nations like Czech Republic, Slovenia and Greece, where we will play with other important names.

7.The album is coming out on 'Rockshot Music', how did you get in contact with the label?
7 - We simply sent our material to various Italian labels including the "Rockshots Record" and after having received several positive answers we chose it for its artistic background. We can say that it was the right choice!

8.On a worldwide level how has the reaction been to your music by fans of folk metal?
8 - Until now, we received very positive feedbacks for the "Goddess Song", the only single we released. Several fans from Germany, Greece, Poland, Spain and even India follow our social channels and personally we can’t wait to see the next reactions after the release of "Faerenus", and maybe to organize the show abroad

9.Where do you see the band heading into musically during the future?
9 - We have a lot of energies, we already have some ideas for the next album and we can not wait to get back to work. Stylistically speaking we will try to remain faithful to our imprint but we do not exclude possible outlets towards more evolved sounds.

10.Where are some of the bands or musical styles that have had an influence on your music and also what are you listening to nowadays?
10 - The KormaKs try to be as original as possible but it is undeniable that the Scandinavian metal influenced us. Bands like Death, Children of Bodom, Heidevolk, Amon Amarth and Folkearth are part of our musical culture, but we all listen a little bit of everything, not only metal music.

11.Does Paganism play any role in your music?
11 – Although Celtic and Scandinavian traditions fascinate us a lot, we have not included in "Faerenus" elements referred to paganism. For the future we do not know what could happen.

12 - We are lovers of camping in open nature, some of our songs were born right in the woods. In the same way we love meat and wine, especially the local ones. Finally, fantasy and role-playing games are among our favorite pastimes.

13.Before we wrap up this interview, do you have any final words or thoughts?
13 - We thank you for this small space that you gave us and we hope that "Faerenus" could be welcomed by critics and fans, which would give us the right push to continue our journey.

Posted by OccultBlackMetal at 6:05 PM