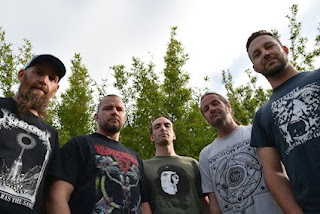 1.Can you give us an update on what has been going on with the band since the recording and release of the new album?
We have been in and out of lockdown due to the virus, but we have basically finished our first song for the next album and are continuing to write new material. We really wanted to be out there touring and promoting the new album but just like everyone else in the world it's just not happening. So its basically just sit down and lets get another album done!

2.In June you released your first full length, musically how does it differ from your previous ep?
It's more extreme! We took one of the songs off the EP and re recorded it as we thought we never captured the true sound we wanted from it. But on the Continua album we brought it to life! Musically we got more advanced in technicallity and song structure and kept pushing on our recording abilities.

3.This is also your first release in 5 years, can you tell us a little bit more about what has been going on during that time span?
Well after our EP we lost our bassist Luke so we had to then find a new bassist for which we found in Dave, He was in the band for about 3 years and right before bass was about to be recorded for Continua we decided to go back to our original bassist Marcus. So he then had to come back into the band and write all new bass parts for the album within a couple of months which he did amazingly! So basically we were just writing/gigging and fine tuning our line up. Which we are 100% happy with now.

4.A lot of your lyrics cover science fiction themes can you tell us a little bit more about your interest in this topic?
I've been a huge Sci Fi fan for as long as I remember and movie/tv buff. So basically all my lyrics are based off Movies I love or TV episodes I love. Parallel Dimensions/Time Travel are full of endless ideas, Shit if Star Trek can make god knows how many episodes about it I can dable in the idea as well haha. And being death metal the stereo type is to sing about death etc... But its over done and to me not very interesting so I write about what I enjoy.

5.What is the meaning and inspiration behind the name 'Nemesium'?
Nemesium is Latin plural for Nemesis. The inspiration basically just came from searching for cool words

6.Can you tell us a little bit more about the artwork that is presented on the new album cover?
The artwork was done by the amazing Kirill Seminov, I found him on Instagram and was hooked! I love the sci fi H.R. Giger that he goes for but he puts his own little spin on it. The idea that we gave Kirill is that each side of the cube is a different Parellel Dimension giving you multiple stories out of each world.

7.What are some of the best shows that the band has played over the years and also how would you describe your stage performance?
Personally the best shows I have played is when we supported Omnium Gatherum or Krisiun in our home town. Such amazing International acts and we get to support them which was amazing!

Our stage performance we try to go as hard as we can each show and make it as aggressive as possible. It's loud and tight!

8.In 2015 you also done a 'Damaged' cover, what was the decision behind doing your own version of one of their songs?
We all grew up with Australian bands being a huge inspiration for us. And Damaged being a regional band like us and been at an international level of greatness we always wanted to pay homage to them.


9.On a worldwide level how has the reaction been to your newer music by fans of melodic black and death metal?
Very positive! We have been overwhelmed with positive comments and reviews. I think we have created something that is fresh and new but also keeping in with the old sound which is exactly what we were after. We all are fans of multi genres and we all bring them into the mix to create something different.

10.What is going on with some of the other bands or musical projects these days that some of the band members are a part of?
Clint - I'm in a few other bands at the moment, an old school death metal band Munitions with Marcus our bassist. And also a Post Black Metal band titled Visha Kanya.
Chris - Plays in an old school death metal band also in our home town called Destruktor

11.Where do yo you see the band heading into musically during the future?
We want to basically keep doing what we're doing. We're all happy with the way we write and with the reviews coming back it looks like we're on the right track.

12.What are some of the bands or musical styles that have had an influence on your newer music and also what are you listening to nowadays?
We all love different genres of Metal and music. From old school death metal and black metal to the more modern melodic death and black, to Grind and all things tech. Even Post Rock and classics like Queen. So we have a lot of influence between us which I think is great!

Nowadays personally I can't get enough of the Post Black Metal genre so Harakiri For The Sky and Numenorean to name a couple.

13.What are some of your non musical interests?
Music is basically my main interest, outside of the bands I have a Huge family to take care of. 6 kids...... And I run my own Carpentry business so I don't have time for anything else haha

14.Before we wrap up this interview, do you have any final words or thoughts?
Cheers for the interview guys! And stay tuned to our Facebook page for any new updates coming up soon. We really want to get out there and start playing live again and to show the world what we can bring to it.

But in saying that, support the underground and keep Death Metal alive!