Ahoy! Thanks for your interest for an Interview. We responded as a band together. Calarook is
Philipp Wyssen: Vocals
Nico Wiget: Guitar
Lukas Mischler: Violin
Yves Locher: Drums
Flavio Pompeo: Bass
1.For those that have never heard of you before, can you tell us a little bit about the band?
We are a Pirate Metal band from Winterthur in Switzerland. We started in 2014 and began to complete the lineup and write first Songs. We are all silly but still serious. Silly about the lyrics, serious about the songwriting itself. We are of the sort who want to make music, which we would listen ourselves, with a theme that we like. We love beer and party, but we know that we have to deliver good shows. We know when it is ok to party and when we have to be serious.

2.You got your first full length coming out in September, musically how does it differ from your previous ep?
All three songs of the EP are also on the full length. But we re-recorded them because we had more experience and the possibility to record it in a much higher quality. Our goal was to deliver a good product as possible for the audience. If you compare those songs from the EP with the new ones you can clearly hear the difference.

3. A lot of your lyrics cover pirate themes, can you tell us a little bit more about your interest in this topic?
Pirates were very free, did not allow themselves to be oppressed and wanted their lives to be independent of a king thousands of miles away. They lived their lives and did what they enjoyed. They loved rum, we love rum. So one more thing in common.

4.Originally the band was called  'Calico' what was the cause of the name change and also the meaning and inspiration behind the name 'Calarook'?
When they searched for our old name on the Internet, all the cats came up with pictures, some guns and some company in California. Someone gave us a good tip. Our band is too hard to find, we should change our name to something that stands out in the online search. So early in the band's history this is still unproblematic. To not deviate too much from the old name to our current one, we came up with the idea to call our band Calarook. The name is fictitious.

5.Can you tell us a little bit more about the artwork that is presented on the new album cover?
Patrick Wittstock has done the artwork. He already made some other great Artworks. It was a good decision to work with him. The idea was to make it fit with the title track of the album: Surrender Or Die. Therefore the pirate ship which attacks a ship of the crown. They didn’t wanted to surrender, so they have to die. And we then plunder their ship.

6.What are some of the best shows that the band has played so far and also how would you describe your stage performance?
One of the best shows was clearly the one at the Ragnarök Festival in Germany. It was our first show at a festival. After we had a huge party on the stage, the party went on in the backstage with all the other great bands who played there.

7.Currently you are unsigned, are you looking for a label or have received any interest?
We are looking forward to try to get in contact with some labels after the release of the album. Or yeah, maybe a label will contact us in advance. Who knows?

8.On a worldwide level how has the reaction been to your music by fans of folk and death metal?
Until yet very good. Most people like the music very much. The comments to our first music video are all positive. So it seems we are on the right way.

9.Where do you see the band heading into musically during the future?
In addition to the three videos we want to present our album live. However, it is currently not so easy to plan shows because of the known reasons. A tour abroad is already in the agenda for 2021. But we hope for a soon normalization of the situation. So that everything is feasible again as usual.

10.What are some of the bands or musical styles that have had an influence on your music and also what are you listening to nowadays?
Every one of us listens to different kinds of metal music and even punk or other related genres. This leads to the diversity in our songs and its own style. It’s difficult to say which bands had the most influence.

11.What are some of your non musical interests?
All of us like to make party and get shitfaced with friends. Some of us have motorcycles or are studying at the moment. Outside of the metal world we are normal people like everyone else.

12.Before we wrap up this interview, do you have any final words or thoughts?
Stay healthy and support the entire event industry next year. This is the only way to keep the music alive. Because difficult years will surely come to the entire industry. 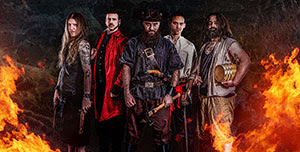