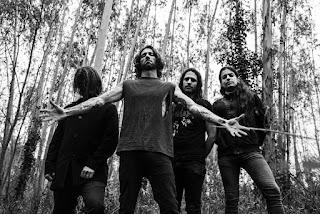 
We were supposed to have a full European tour this summer and a US/Canada tour in the fall but COVID-19 destroyed all plans, so we had to postpone our Euro tour for the summer of 2021 and we are still rescheduling our North American tour since their out break occurred later than ours so we'll see when that can happen. On a positive note, I was able to take advantage of the lock down and wrote a bunch of new material for our up coming album due in 2021, which I'm very excited to get into the studio and get that going.


Dead Bronco started off as a cow punk band but since the beginning we've had numerous changes in the line up due to our tendency to tour heavily. Many people can't handle the life style of long periods of time away from home with out much of a benefit. Every time I had to bring in a new member the music would change, obviously because of the influence each one would bring to the table. I always saw DB as an aggressive dark band even if we did play country, but once we released our third album “Bedridden & Hellbound” I saw that the music we were making was very cheerful and that wasn't what I was trying to go for, so I decided to reconstruct everything and form an entirely new line up which came with “Driven By Frustration”. I was very happy with the result of the album but I was very disappointed with my band members. They were in it for the wrong reasons, thinking they would make a lot of money or get famous. They would make outrageous demands that basically bankrupted the band, that formation almost destroyed my dream and my band which I worked so hard to create. Again, I decided to throw them all to the curb and remake the band with straight up friends and create what ever came out naturally. THE ANNUNCIATION was planned as my final farewell album but I enjoyed touring and creating with these guys that I've decided to keep it going. I've upset a lot of country rockabilly people with the change, I've been threatened at shows and have had things thrown at me on stage and one dude tried to fight me calling me a “traitor”. Luckily I've lost all those closed minded finds and have made new ones in a totally different scene. I'm a lot happier now where I'm at with my music and can't wait to see where it takes me.


3.What are some of the lyrical topics and subjects you explore wit the newer music and also how would you describe your progress as songwriters over the years?


I guess you can say my lyrics are a bit darker and more violent now but they kind of have always been that way. I come from Florida from a very religious, right winged house hold where I grew up with domestic violence and the guilt of sin bestowed on everything I thought or did. I write a lot about my past and what my stepfather used to do to us and how it still affects me. Doesn't matter if the music is happy or dark sounding, I sing about my demons. I've seen how my writing has evolved over the years and I have lyrics that are better than others but I do see that what I write now is way more coherent than what I've written in previous albums. Practice makes perfect.


4.What is the meaning and inspiration behind the name 'Dead Bronco'?


When I first arrived to the Basque Country I saw a few guys playing Johnny Cash outside of a bar and I asked them if I could play as well. They were called “Mis Amigos Me Llaman Bronco” (my friends call me Bronco), they said yes so we started playing in front of all the bars in town for free beer. The band started to gain recognition around town and I wanted to start something more serious but the singer of the band seemed like he wanted to do his cover songs forever, so I decided to go my own way and take those who were willing to make original music. Pretty much all the good members of the band decided to join me so after that the Broncos died and that is why I named the band Dead Bronco because I killed the band.


5.Can you tell us a little bit more about the artwork on the newer album covers?


We worked with the Russian artist Trofimova Alina Sergeyevna who had done the art work for “ Death Roots Syndicate” out in Texas which we were featured in a few times and they were a label that promoted dark country artists and I really liked her work. I wanted to get a rootsy feel keeping true to our folk base but leaning towards a black metal cover. I think she did a great job mixing the two textures together.


6.The band has members in both the United States and Spain, how does this work out in the recording process?


I'm actually the only one from the US. I've been based out in Spain since 2008 and have been working with Spanish musicians ever since.


7.What are some of the best shows that the band has played over the years and also how would you describe your stage performance?


We've played our share of concerts over the years but I think the most memorable one was at Sziget Fest in Budapest where there were thousands of people but I think my favorite show was Tsunami Fest 2018 when we played with Bad Religion and Prodigy, the energy of the crowd was intense. I would say our stage performance is very high energy with a lot of attitude. I like to give a show that I myself would enjoy seeing and I'm very big fan of mosh pits and walls of death even though I'm trying very hard to not injure myself anymore. I've had a few accidents where I fell off the stage a few years back and broke my arm and wrist which is still giving me problems till this day.


8.The new albums where released on Sun & Moon Records, how would you compare working with this label to other labels you where a part of the past?


We've always self-released our albums except two which were released with Roots Union Records out in Nashville Tennessee but there's no comparison with Sun & Moon Records. They give complete artist freedom to create what the band wants and believes and our music is finally available world wide and reaching another type of audience which would have been more difficult to get to with out their help. I'm very happy to be part of the family.


9.On a worldwide level how has the reaction been to your new recordings by fans of underground music?


We are receiving a very positive reaction. The change was a slow process and as I mentioned before we lost a lot of our fan base but gained a totally new one. Our shows are filling up with new faces and open minded people. We've also been receiving good reviews by music critics so I think over all its been good and I can't wait to finally get back on the road and show everyone what we do.

The future is so unclear but we do have a contract with Sun & Moon for two more albums and I will always make music as long as I am alive, it's my reason of being.


11.What are some of the bands or musical styles that have had an influence on your newer music and also what are you listening to nowadays?


I listen to a lot of different types of music but I guess the bands that have most influenced me in these last two albums have been “Those Poor Bastards”, “King Dude”, and “Capricorns”.

I love all types of music from classical, country, black metal, to cumbia. I often listen to Pergolesi and Vivaldi to start the day. I'm very big into Bethlahem, Scour, Silencer, and then I'll change it up and go to NoFx, Union 13. But I was just listening to Death in June as I was writing this.


Surfing is basically the only thing other than music that keeps me sane and makes living life a bit more easy. Being from Florida I was born and raised on or in the water, so I need to be by the ocean to feel that I'm ok. I also enjoy cutting hair very much, I've been doing it since I was 15, even though I haven't done it in a while.


I would like to thank all those who have supported us through all the changes and ups and downs in the band and I would also like to welcome the new listeners to the family. If it wasn't for you all we wouldn't be where we are and doing what we do. Thank you!