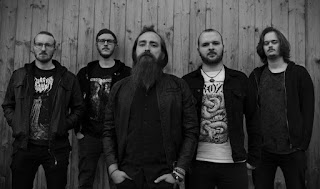 A: I started Abyss in 2009 together with another former member. The line-up soon was completed by aspiring musicians from a rural part in Bavaria, where we are located. Our music is a mixture of Melodic Black and Death Metal. If you like classic bands like Dissection, Sacramentum and if you appreciate modern successors that draw at least a little from their heritage, you might enjoy giving us a spin.

2.So far you have released a demo, ep and a split, musically how do they both differ from each other?

A: Our early work resulted in a number of songs that had a bigger Death Metal influence. This influence is still noticeable on our last EP from 2018. Throughout the years the Death Metal ration diminished. And together with some other new elements, we solidified a specific trademark sound we were aiming for. This is what you will hear on our part of the coming split with Besna.

3.The band has been around since 2009 but waited until 2018, can you tell us a little bit more about the earlier years?

A: That´s a common question. Mainly for two reasons that deserve a little elaboration:

First one would be because of line-up changes. The number of people that had an instrument in their hands in order to play for or with Abyss comes to more than a dozen already. The changes had nothing to do with personal differences, but more with people going abroad, moving away, getting a job, etc. Those things caused a lot of delay and pauses in the past and for those very reasons you will hear two session musicians on the coming release. There is a permanent line-up though, that works on the songs and concepts and you will most likely see on stage.

Second: It took a while to build the musical skill and capacity to transfer our ideas to reality in a proper way. I can only speak for myself, but I basically learned to play the guitar with the Band.

4.What are some of the lyrical topics and subjects the band has explored with the music so far?

A: We dedicated our themes to chaos. In short: Our songs should reflect mankinds unrest
about being at the mercy of this power and its search for sense, order and the higher, when there is
none of that. A rather nihilistic view on the world and humanity.


5.What is the meaning and inspiration behind the name 'Abyss'?

A: As the literal meaning depicts a bottomless pit, it reflects the symbolism and themes of our songs. No clear line, no end, no order. The name is used quite often by bands. And during the 10 years of minor public activity, it would have been easy to simply choose something more distinct. However, the name Abyss resembles a special meaning for the members. The missing puzzle piece, so to say, that binds all the other aspects of the band and brings it back to conclusion. Contrary to its meaning.

6.Can you tell us a little bit more about the artwork that is presented on the split cover?

A: The artwork awas made by Théo Braisaz, a french artist working under the name „Mr Kiwi“. I work closely together with him for another project. He´s an excelent graphical designer. Our cooperation reached a level where I can lay down my visual ideas and from then on almost blindly trust him with the realization. For the split, the artwork gives several hints on its main themes, which revolve around unfulfilled religious -or even ideological- salvation, absence of the higher and natures indifference towards these themes.

A: We had many great shows. One that really stood out was our first live performance. We played in front of 100-200 people in a Band Contest of which probably only 5 % were into Metal. The feedback was overwhelming though. Everyone freaked out when the last note subsides. It was the beginning of many things and the moment when Abyss truly came to life.

As a matter of fact we often hear that our live performances are far more convincing than our releases. Our music profits from the chaotic frenzy both Band and audience find themselves in during live situations. In the past recent years we worked hard to make our show aesthetically fitting to the concept. So it´s all about increasing the intensity to make the music, the dread almost physical.

8.You have a split coming out with Besna in September, what are your thoughts on the other band that had participated on the recording?

A: Already during the planning of the „Further Into Perdition tour“ working together went off smoothly. When we played together in Bratislava, they convinced us musically and therefore were our prime candidate for our intended split project. While our music has a certain drive and a pounding blast every now and then, theirs is equally wild, but more on the melancholic side and adds important aspects. Quite naturally and despite the very slight differences in the styles we play, the split reached a coherent whole.

A: That will mostly turn out with the responses towards the coming release with Besna. Besides playing a east-euro-tour together with Groza, Abyss stayed hidden a long time. In my eyes, the project still has to get „out there“.

10.When can we expect a full length and also where do you see the band heading into musically during the future?

A: One upside of the current crisis is, that naturally artists are most likely sitting at home and have time to live out their creativity. I look forward to all the „quarantine creations“ released in the future. And perhaps we will be among them. Soundwise, sometimes I wish to make our music a little harsher and messier. It is leaning towards that already and I still want to keep our melodic trademark. After all, who needs another Deathspell Omega clone.

A: One main part of my songwriting work is indeed listening to new stuff. I am one of the persons that really listens to everything. I know people say this quite often and to me personally that´s actually often negatively connotated. Black Metal wise, I´m more and more intrigued by french, canadian and icelandic Black Metal. To name a few general bands I listen to quite often: Svartidauði, The Great Old Ones, Der Weg Einer Freiheit, Sombres Forêts, Gris, Selbst, Be'Lakor. Sure from our style, I guess one can draw conclusions on what we mainly listen to.

A: As I have hinted already, Abyss is a busy band. Some members will experience some career developments in the future. The plan is to lay down enough ground work for Abyss now to still be operational when that time comes.

A: Thanks for the interview, check out our split. One song has been published so far (https://www.youtube.com/watch?v=2_jkcV8_IDI&fbclid). Look out for the next one that will drop soon!

Cheers,
Posted by OccultBlackMetal at 10:42 PM