We have been working hard on promoting our album, as we self released on the 26th of December 2020, working on new music, staying sane haha

2.Recently you have  released a new album, can you tell us a little bit more about the musical style you went for on the recording?

Well, the musical style is pretty broad , but mostly elements of symphonic black metal, with hints of thrash at times.

3.On the new album you also covered the writings of John Milton, can you tell us a little bit more about your interest in his work?

Yes, I love reading, love words, his writings to me are so beautiful, the way he uses words, those poems in particular are brutal and dark, a great concept for an album.

4.You also mention some interest in the occult on the facebook page, how would you describe your interest in Occultism?

This is a question that answering could go on for a long time as I believe it is very personal for each of us.

5.What is the meaning and inspiration behind the name 'Empyrean Fire'?

Above Heaven is a sky of fire "Empyrean Fire" the highest point.

6.On the album cover you used some of Gustav Dore's artwork, do you feel his work is perfect for the lyrical concepts?

Yes, as he originally  illustrated Paradise Lost and Paradise Regained

7.has the band done any live shows or open to the idea?

Not yet BUT we definitely want to!

8.The album was released by 'Heavy Gloom Productions', can you tell us a little bit more about this label?

Yes, this label is owned and operated by Jason Yorke, our guitar player. His label has been around for several years with releases from Eternal Valley and more.

9.On a worldwide level how has the reaction been to your music by fans of symphonic black metal?

We have had excellent feedback! GREAT reviews! Can not thank you all enough for your support!

We will keep on the same path, as it is a great one, continue to write music that explores different ideas.

Emperor, Dissection, Dimmu Borgir heavily influenced by these bands, so very talented! What are we listening to nowadays, Panzerfaust, Uada, Skogen, Silver Talon.

Yes, thank you ADifferentShadeOfBlackMetalZine for the interview, and thank you to everyone for their support! 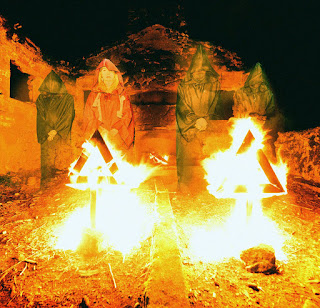