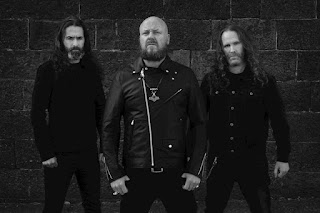 The band has been playing a few local shows here in Melbourne after a hiatus for quite some time during 2018/19. We have rehearsed a few times now with some new live session players which now makes the band a 5 piece for our live performances which what l think we have needed for the live stage for sometime . On our return to the stage in July we played one of the new songs live "Mountains Call"
which was a really good for us to play something fresh and new, so that was a really great vibe onstage that night. We have also played a few other local shows and have added another new song "Beyond The Exosphere" to our set whilst our singles were being released over the past month. We have been getting real great feed back and its great to be playing again.


2.You have a new album coming out later in November, musically how does it differ from your previous recording?

Yes, the music differs quite a bit on this album "Coldest Of Cold". You will notice as a listener if you were a fan of "Reclaim The Darkness" that we've picked up the pace a little, this is something we chose to do before writing the new album and it has really made an impact for us not only for the recording but for the live performances also. The music to me feels a lot darker and colder, the songs we chose for the album were worked on for a long period of time, we went over these songs until they were 100%.  So working on getting the right arrangements and chorus's to come together to make the song sound strong and complete was a long task. We are very happy with the outcome.

3.What are some of the lyrical topics and subjects the band explores with the new album and also how would you describe your progress as songwriters over the years?

As songwriters Dave Hill and myself work very well together to arrange and write to what we think is the perfect song for the band, one step at a time. We work on one song for weeks to get the write balance for what we think is the perfect song which has and must contain all the right layers. As for the lyrical content "Coldest Of Cold" in some way continues on from its predecessor in which there were battles from ancient times amidst the bleak surroundings from Scandinavian landscapes only this time we have introduced more of the galaxy and a lone warrior battling on in this existence as you'll notice with songs such as "Star" and "Beyond The Exosphere".

4.All of the band members are also involved with other bands, what is it that you bring into the music of 'King' that you are not able to do with your other groups?

King is a total different band compared to other bands we play or have played in. We all enjoy our heavy metal from all types of genres but for us we wanted to start a band that is dark, grim and catchy and very melodic, this is something we have wanted to do for a long time. We are big fans of the Swedish and Norwegian metal scenes so to start a band and write songs that we enjoy listening to as well as playing live is very satisfying for us. We all have played in grindcore bands in the past so writing songs for longer that 2 minutes and pronouncing words in full was a big achievement for us haha!

5.What is the meaning and inspiration behind the name 'King'?

I think the band name suits our style of music, it was just a name that came to mind and I pitched it to the others and it stuck. Its a strong name and we all like it, people and fans find it hard to find us on social media and music platforms because its just King. But we are around and you will find us!

So the artwork was once again delivered to us by our good friend Xavier Irvine in which he had worked on the previous layout of "Reclaim The Darkness". This time musically we have delved into the galaxy so we though maybe we should opt for an image from outer space. So this album cover has captured an image of a nebula which was taken by Nasa for which we had to get a tick of approval for us to use. I think it works well for us and captures the essence of what you'll hear on the album as a listener and looks amazing. We are very happy with the whole layout of the artwork for the album and it suits.

The recent shows we have performed with a full band really shows that we are back and we are a band to be reckoned with. The force is strong and the stage presence is alive and ferocious. Having had a break over the past year really gave us a boost for our live shows. Also adding some new songs to the mix gives the set some fuel to create good strong energy between us and our crowds watching us.

Yes we are about to do a small run of shows with "Wolves In The Throne Room" in the next week so this will be the first run of shows for us now that the album is out. We are also planning a headlining tour to start sometime early 2020 for Australia and hopefully we can bring this tour abroad for the first time and play a handful of shows in Europe next year.

9.On a worldwide level how has the reaction been to your newer music by fans of melodic black and death metal?

We have been getting some great feedback and the reviews so far a really good. Our label really do some great work and we appreciate the work they do for us as a band. This time Metal Hammer Uk have streamed our album and this helps get our music out there immensely, its all about spreading your brand and thats what we are trying to do. Its good to see that fans are enjoying our creation from around all parts of the globe. Its a humble feeling.

Apart from King,  Dave Hill And l have gone back to our grind roots and have started a band called "Remains". This band is going well the live shows are great and we have a great time playing smaller venues and its good to see and play with fresh younger bands here,  the Australian grindcore scene  is really strong. As for our drummer Dave Haley he is also busy doing work with "Psycroptic" so as you can tell we live for metal, we love to play metal and we'll die playing metal!

As a band you want to write a better album for a follow up and this is what we hope to achieve but for us l think just sticking to our recipe for writing  great catchy songs is what we like and is what we'll stick to...it works!

We all love all kinds of heavy metal music but for us to write the music for King we have been greatly inspired from many class act bands from Norway and Sweden and you can probably pick up some elements from songs we play that will make you say "hey that sounds like this band or that sounds like that band"...so you'll definitely hear some of these classic bands we are inspired by and love. As for now l enjoy listening to my Spotify weekly playlist, it introduces me many different bands that l've never even heard of so thats always fun. Plus l'll throw in my need to hear weekly bands that are a must for my ears.

We hope you have bought and are enjoying our new album and we hope to come a play in your neck of the woods real soon. Keep it grim and all hail the KING!!

Posted by OccultBlackMetal at 11:36 AM