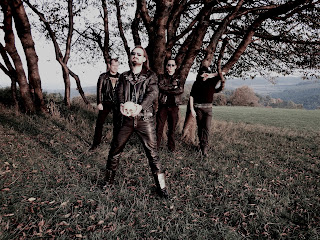 Thogarma: After the recording we split up due to internal problems with each other (extreme music for extreme people, what can I say...?) By 2017, we'd solved all the inconsistencies, played some reunion shows and finally released the long awaited "Anti-Human Art" at the end of 2018.

2.Towards the end of 2018 you had also released a new album, musically how does it differ from the stuff you have released in the past?

Thogarma: Our early stuff was simple Thrash/ Death Metal with a blackened feeling, mostly in the vocals. For me it was the past; the others create the music and I do my madness within the lyrics and vocals. Finally Tim and i are on guitars nowadays, complementing us perfectly, writing the riffs we love. Our drummer is much more involved in the songwriting too as it is standard in common bands I think. He´s a great piano player next to his drum warfare which is helping us a lot creating new songs or regarding the great concept of our actual album.

3.This was also your first release since 2006, can you tell us a little bit more about what was going on during that time frame?

Thogarma: We played a lot of gigs in Germany, Czech Republic, Netherlands... We haven´t released anything in around ten years because we had many line-up changes. I´m not sure if can remember the names of all the guitarists that we have worn out. I don't want to remember some of them either. So the old or remaining guitarist had to train someone new all the time, the writing of new songs usually remained completely on the sidelines... There was a time we were standing there without guitarist... After all I decided to play second but constantly remaining guitar which changed the songwriting a lot too. Luckily we have Tim with us for a very long time now, Matthias on bass and I hope this line-up will be eternal.

4.The new album is a concept album, can you tell us a little bit more about the songwriting?

Cassiel: As Thogarma already told the songwriting process took a long time about 10 years or more due to the numerous line up changes. So a lot of songs developed over that period and there was no concept in the beginning of the recording process. Every song stood for their own and due to the numerous influences of the different songwriters every song has its own character. When we started the recording process I had the idea to frame the songs with classical piano pieces which I wrote specifically for the songs based upon the starting or ending guitar riffs. I think this makes the album outstanding at this time in the present metal scene because no one tried this so far to my knowledge.

5.A lot of the newer lyrics where also inspired by the writings of Dante and The Occult, can you tell us a little bit more about your interest in those topics?

Cassiel: Well when i wrote the piano songs we had nine piano pieces and nine metal songs. I thought this was quite a funny thing because it reminded me of the divine comedy of Dante and his nine circles of hell. It was just an accident and not planned at this time. A very diabolical accident if you ask me. The nine circles of hell on the other hand stand for the human mortal sins and when I read Thogarmas lyrics I realized that a lot of these mortal sins are reflected in his lyrics. So thematically the piano pieces represents the nine circles of hell with the human mortal sins and built contemporaneous the bridge between Dante and the lyrics of the songs.

6.What is the meaning and inspiration behind the name 'Decision To Hate'?

Thogarma: Name is program. Everything revolves around the theme of hatred towards humanity. It was an old friend´s idea, he was our webmaster and sadly past away a few years ago.

Cassiel: The artwork is a painting of Gustave Doré of his Paradise Lost cycle. It shows Lucifer shortly after his banishment from heaven. Doré also created a lot of paintings about Dantes Divine Comedy. I sent the band numerous paintings of Doré from the Divine Comedy but neither of  them was totally satisfying. So we decided to take the Doré painting of the Paradise Lost cycle. I think it fits thematically perfect to the lyrics and the music of the album and especially to the piano pieces.

Thogarma: The Open Hell Fest in Czech Republic together with Dissection and many more in 2005 were great in front of thousands of people, would love to play that one again with todays line-up. In my opinion we had a better sound than Dissection, the sound engineer has known us from a mini tour with Dark Storm (CZ) before... Many great and crazy gigs. Different stage performances, from professional to a bloody massacre using needles, knives and barbed wire. Total dedication, total consecration!!!

9.Do you have any touring or show plans for the future?

Thogarma: Due to our job situation (we all are fukking slaves...) we concentrate on shows, touring for weeks is impossible. We were a bit late to apply for open air shows in 2019, doing some gigs in halls and smaller locations and attack in 2020 in open fields.

10.Currently you are unsigned, are you looking for a label or have received any interest?

Thogarma: Black Metal labels are mourning that we aren´t 100% BM, Death Metal labels are crying that we aren´t old school; if we would sound exactly like all this fukking boring standard stuff with stolen riffs by the old heroes (mainly from Sweden) they would sign us. Woohoo. We won´t change, we won´t want to be restricted. If there would be a fair label, intolerant regarding lyrics but open minded musically, why not...

Cassiel: A lot of people are asking us about the label situation in the band. I think it is very funny because please tell me the benefit having a label in a band with the dimension of Decision to Hate?!? Labels always want to take influence in the process when a band is shaping a concept of a new record,  thematically, lyrically, musically. Without a label we are totally free in what we want to do. DTH doesnt stand for making a lot of money and becoming very famous. That is not our way creating new art.

11.On a worldwide level how has the reaction been to your newer music by fans of black and death metal?

Thogarma: We get more international attention since we have a bandcamp site, check out https://decisiontohate.bandcamp.com/
Should have gone this path before. At the moment we receive a lot of varying reviews for "Anti-Human Art" - With the large magazines, which expect that one places advertisements with them, the reviews are usually sobering. We don't pay for good reviews. Smaller underground magazines are much more concerned with the music and listen more closely, so there are other results that we can really be satisfied with. Conclusion: Fukk the commerce and support real underground!!!

12.Are any of the band members currently involved with any other bands or musical projects these days?

Cassiel: Currently i am the only member who is involved in other band activities. I play drums in a progressive-metal band called Steorrah and a Rock n Roll band called Psycho Dandys. I also create piano music alongside when i have the time for this. Maybe i will create more of this piano stuff in the future, we will see.

13.Where do you see the band heading into musically during the future?

Thogarma: Actually we are writing the best songs we´ve ever had. We´ll never lose our Black Death Metal roots but "old school" is nothing but an apology for not having own ideas, sorry.

Cassiel: I think the music of DTH is becoming more and more sophisticated. Using the piano was a door to a new direction maybe. I dont know if we want to enlarge this classical piano direction we will see. But i think the new songs will definitely be more away from this „standard“ Black- and Death-Metal style to a point of looking across the edge of a plate.

14.What are some of the bands or musical styles that have had an influence on your music and also what are you listening to nowadays?

Thogarma: We all have grown up with classic Heavy, Thrash, Death and Black Metal. All the stuff I heard in my youth I am still worshipping now. Many years ago it was our drummer Cassiel who brought me closer to stuff like "Perdition City" from Ulver while I was still only into "Nattens Madrigal" just for example. Our path is open minded intolerant, haha! We have a trip-hop part in our song "I hate myself", somewhere between Arkhon Infaustus and Massive Attack... Crazy but working.

Cassiel: Personally i dont listen to heavy metal that much as i did in the past. I am a music teacher and as a result i got in contact with to a lot of other musical directions. Classical music, electronic music, new age music. I like ambient music very much. The „Blade Runner“ Soundtrack will always be one of my favourites. I think its very good for a band to get influences from other musical directions. Only listen to standard Death-Metal generates music that listens to standard Death-Metal. Its a circle you know. All these „Retro 60er and 70er“ stuff which is very famous at this time didn´t catch me so far along with these „Retro Black- and Death-Metal“ stuff. I like listening to the originals but no one needs 18 year old kids which are playing Black Sabbath or Darkthrone riffs in 2019.

15.What are some of your non musical interests?

Thogarma: All within the band are loving nature, we are hiking, mountaineering, doing other stuff there... I took all the pics in the booklet of our new album on my trips to the Alps and the Elbsandsteingebirge, Tim just returned some weeks ago from Saxonia too.

16.Before we wrap up this interview, do you have any final words or thoughts?

Thogarma: Clean the scene! Fukk all those good people bringing lactose intolerance instead of death worship into the wretched remains of our scene, thwarting concerts of great and real dedicated bands... Enter https://www.facebook.com/DecisionToHate for more information.
Thanks for your support and the well-considered questions! No compromise!

Posted by OccultBlackMetal at 9:50 PM