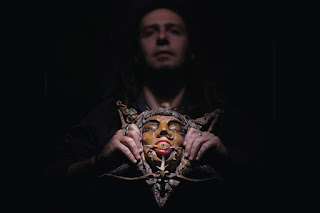 1.Can you give us an update on what has been going on with the band since the recording and release of the new mini album?
1 yes, the project initially had a songwriting way , I wanted to do everything by myself, but, then I realized that  the song needed many arrangements, so, I tried various components, and I lost a little, to find the current line-up, in the meantime , I recorded another mini-album , called "libido et melancholia"

2.Recently you have released a new mini album, musically how does it differ from the stuff you have released in the past?
2I wanted the to be dirty but warm, it has always been the rule I imposed to myself. So many people told me that it seem like a lot of jam session , as far as I'm concerned , the "cellar effect" make the sound very intimate, let'say that I was traumatized by Doors "absolutely live", and I wanted created our own version,.
sorry for comparison..

3.The lyrics on the recording are a concept album about 'time', can you tell us a little bit more about the songwriting?

3.Yes, time is the master of everything, but the concept that turn beyond the figure of the father of all gods, is that music is the only art that need time to be enjoyed , after all , if you think about it , the music is an equation of time taken notes , or better , note between time , what you say?


4.A lot of your lyrics also deal with ancient gods and paganism, can you tell us a little bit more about your interest in these subjects?
4.For me, mythology has been the purest form of metaphor to explain human life, since the beginning of the world , I don't want to do politics, but in my opinion , the problems of the world are largely due to monotheism's, in spiritism , or ancient cult there is more much democracy

5.What is the meaning and inspiration behind the name 'The Absense'?
5.I don't remember , it's been created century ago.. sorry
but is cool is not true?

6.Can you tell us a little bit more about the artwork that is presented on the album cover?
6 Yes , this is my drawing, I created this illustration for synthesize the shape of hourglass between the writing "the absense " and "khronocracy"and everything happens in the wood around the stoner girl , is over they hourglass, so if you want see my artwork you can visit my website www.lucasiri.it
thank you


7.What are some of the best shows that the band has played over the years and also how would you describe your stage performance?
7.the most beautiful experience was as a one man band in kindergarten, where party of saint Lucia, I was drawing funny animal and optical sketch, and I played , changing the lyrics , for italian children, : no rain by blind mellon and doll by foo figthers...
I've never seen such a rapt audience..

8.Do you have any touring or show plans for the future?
no , for  this moment, but I wait for a  response  from a record store and maybe small theater

9.On a worldwide level how has the reaction been to your new recording by fans of metal and other forms of hard music?
9 not bad , we had good reviews from many people , specially in the east- europe, I don't tell about evil reviews  , but I'm very happy for Khronocracy..
let the time work...

10.Where do you see the band heading into musically during the future?
10 I don't know, I don't want speak about dream , I'd love to be sure going on national radio, but I like it too stay in my wanderful undergrond

11.What are some of the bands or musical styles that have had an influence on your newer music and also what are you listening to nowadays?
11 My favorite band of my teenage past are smashing pumpkins, nirvana , soundgarden, but also metallica. dark throne ,  celtic frost, but I lie all music , the disc that I more listening is maybe "boris godunov" by Modest Mussorskji . .. I could not stop to write names of band.. now , for my opinions , are very good : solstafir, alcest, and florence + the machines, ... and darkthrone ,who are now punk, not black-metal ,but I still like them

12.What are some of your non musical interests?
12 as I have already said , I am engaged in painting and sculptures, but I believe that music are the highest art..
if you want ,you can see my sculptures on my youtube channel " the absense"

13.Before we wrap up this interview, do you have any final words or thoughts?
13 I thank you for your kind attention , I wan't add anything, I will fall into philosophy and let us remember that music , apart from time taken notes, is above all fun, thank you very much

https://www.facebook.com/theabsense/?ref=br_rs
Posted by OccultBlackMetal at 8:19 PM