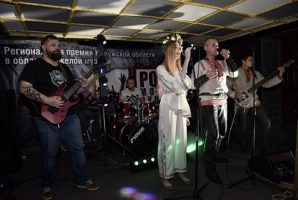 1.For those that have never heard of you before, can you tell us a little bit about the band?
“Temnolesie” was found in 2013. We play mix of black, pagan, doom and folk-metal. And some songs can be characterized like folk-rock.

2.In October you had released your first album, how would you describe the musical sound that is presented on the recording?

It is difficult to describe music. It must be heard. It is mix of blastbeat, powerful guitar riffs, symphonic keyboards, extreme and clear vocal.

3. The band has been around since 2013 but waited until 2017 to release the first album, can you tell us a little bit more about the first 4 years?
First some months we searched bass-guitarist. Of course we created songs and prepared concert program. In 2014 we recorded demo for Internet. In 2015 we released a video and EP “Vision” (self-released). In that year we began recording of full album. This summer we filmed a video, but now it during editing.

4. Your lyrics cover a lot of Pagan topics, can you tell us a little bit more about your interest in Paganism?
I’m member of Union of Slavic Communities since 2002, the biggest Pagan organization in Russia.

5. I know that the bands name means 'Dark Shire' in Russian, how does this name fit in with the musical style that you play?

More exactly translation is “Dark woodland”. The word “woodland” associated for me with Slavic history. There are was a great forests in Russia in ancient times. The word “dark” associated with black-metal, features of which are presented in our music.


6. What are some of the best shows that the band has played so far and also how would you describe your stage performance?

I remember two shows in Obninsk (Kaluga region) in 2015 – audience greeted us warmly. And last show in Bryansk this December I like too.
At stage we are usually dressed in Slavic style clothes. And part of show is wooden idol.

7. Do you have any touring or show plans for the future?
In the end of December we take part in New Year party in native Kaluga. 30th of March we play with “Satarial” in Kaluga and maybe than go to mini-tour.

8. On a worldwide level how has the feedback been to your music by fans of melodic black, folk and pagan metal?
We read good reviews from Greece, Tunis, USA and some other countries.

9. What is going on with some of the other bands or musical projects these days that some of the band members are a part of?
Our guitarist Igor Pryanishnikov is in folk-metal band “Ladushka”. It preparing a great tour in Russia. Our drummer Sergey Senin is member of black-metal band “Asmund”. I don’t know anything about these plans.

10. Where do you see the band heading into musically during the future?
The next album (or mini-album) will be experimentally. It will be folk-rock. But then we’ll be back to hard style with more using clear vocal.

11. What are some of the bands or musical styles that have had an influence on your music and also what are you listening to nowadays?
There are many bands had an influence on our music: “Dimmu Borgir”, “Summoning”, “Cradle of Filth”, “Thyrfing”, “Amon Amarth”, “Amorphis” (early), Russian – “Tvangeste”, “Arkona”, “Butterfly temple”.  And I listening many genres from classic music to death-metal.

12.What are some of your non musical interests?
Besides membership in Union of Slavic Communities I’m a head of internet-TV “Vyatich”, and engaged mix-fight.


13. Before we wrap up this interview, do you have any final words or thoughts?
We are surprised that our album listening in other countries and thank our listeners for interest to our music.

Posted by OccultBlackMetal at 9:45 PM