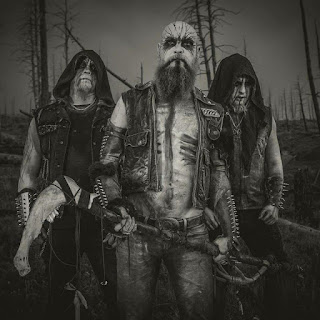 Hello,  first of all, thank you for the interview.  We are currently  hard at work writing new music for our next release and preparing for a big show with belphegor and our cd release show.

2.You have a new album coming out in November, how would you describe the musical sound that is presented on the recording?

3.A lot of your lyrics cover Sumerian themes, can you tell us a little bit more about your interest in this topics?

Our lyrics are not only based on Sumerian theme,  as we only have a few songs that that refer to the topic, the lyrical content in our music  is not limited to one theme.

4.What are some of the other lyrical topics the band explores with the music?

Sar Isatum's lyrics are inspired by native folklore, science fiction, historical events, extraterrestrial theory and the reimagining  of bible happenings from outside points of view. The lyrics tell stories ranging from visions of an apocalyptic and desolate future to native tales of frozen hearted giants to stories of extraterrestrials seeking asylum from a dying solar system only to enlighten prehistoric man

5.I know that the bands name means 'King OF Fire', how does this name fit in with the musical style that you play?

A fire is devastating, it destroys  everything in it's path, and that's how we perceive our musical style, our music is driven by the inner fire that each member posses and it's  represented not only in our recorded music but our live performances

6.What are some of the best shows that the band has played so far?

We have played several great shows,  in a few days we are playing with belphegor,  and we played with inquisition and Uada last month, those are few of the best shows we've played.

7.Do you have any touring or show plans for the new album once it is released?

We do plan on booking a tour for 2018 we will start booking for it soon,  we have also been confirmed  for several fest in 2018.
Anyone interested in booking the band can contact us at isatumsar666@yahoo.com

8.Have you received any label interest?

Yes we have but we haven't  found the right label deal. We just teamed up with Death Portal productions and exalted woe for a distribution deal for the release of the album but we're still searching for the right label be a part of.

So far it has been received  very well,  a lot of good feed back not only locally but worldwide, but there's still much work to do to get the actual recognition we are aiming for.

Myself (JP Dalkhu)  and cannibal (bass)  both play in a death metal band Vomit God,  we have a tour set up next year and a few fest including las vegas death fest. Our two new members Seven(guitars) and Lesath(keys) come from suns of sorath and they just released an ep.  Seven is also the drummer in pile of priest and they are also releasing an ep nov. 24. Nico has been our live guitar player for the past 7 months and his band is depths of dementia and they are also releasing an album soon.  Our singer Demothi only focuses in S.I and his art.

The atmosphere in the bandroom and pur compositions have been better than ever,  the introduction of the new members has been outstanding, we are writing new music and are very pleased in the direction  that the new material is heading. We are all in the same mental mode and have the same  determination which is key to making  great music and being a successful band.

Some of our musical influences have been emperor, gorgoroth, dark funeral, old man's child   to name a few but we strive on uniting the elements of several styles and influences with in our members and aiming to make our own sound.
I personally have been listening a lot to 3 bands. Emptiness, Igorr,  and the bm from turkey the sarcophagus.

On behalf of Sar Isatum I want to thank you and the readers for the interview.
We will be leaving our mark in the black metal world, if we come to a city near you come out and witness our intense  live performance and purchase our album.

Posted by OccultBlackMetal at 4:06 PM