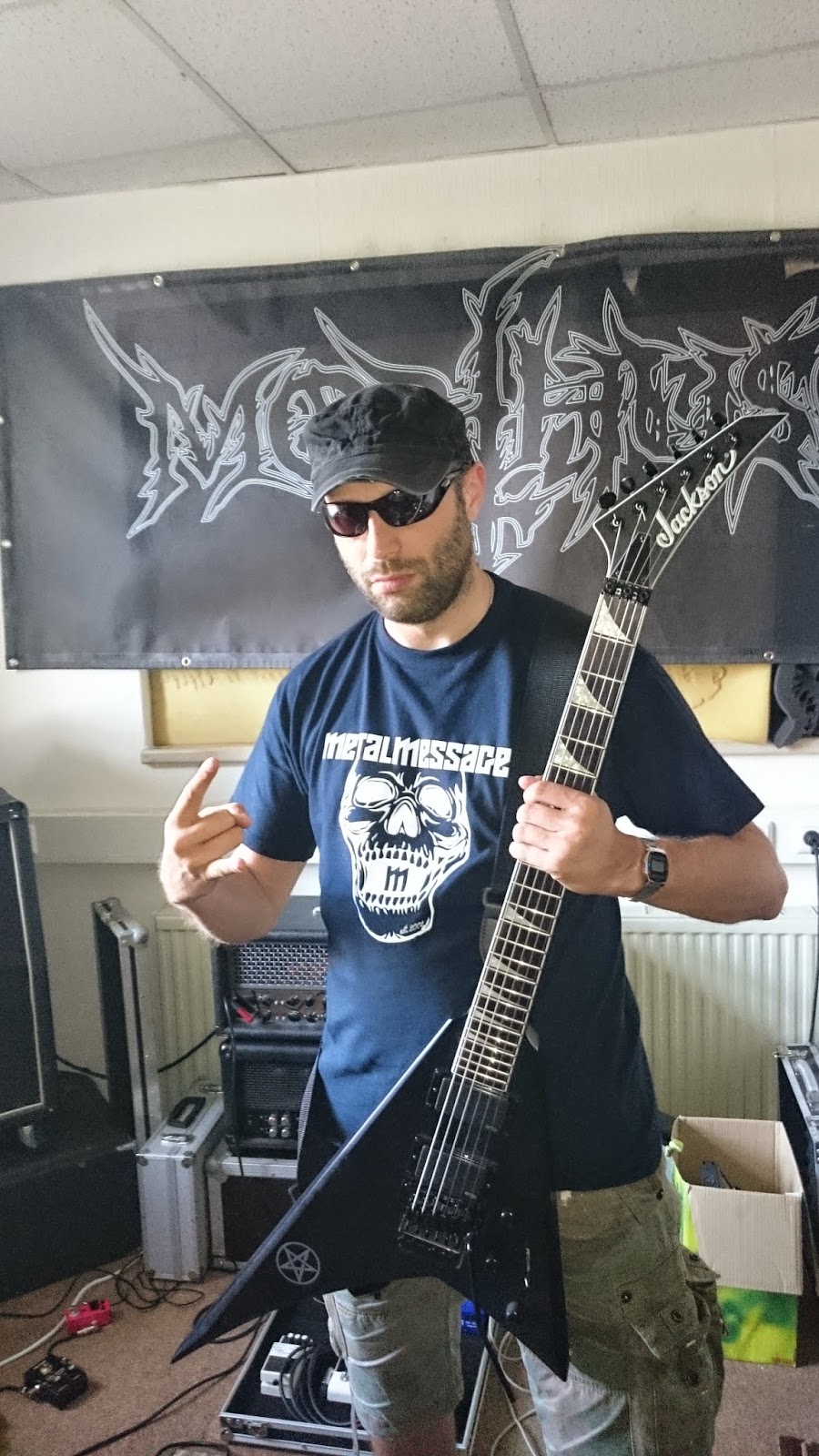 INTERVIEW
ADIFFERENTSHADEOFBLACKMETALZINE, USA
-
MORTHUS
(Asgharoth Morthus Diaboli – Lead Guitar)
1.For those that have never heard of you before, can you tell us a little bit about the band?
The band was finally formed in late 2013 and after completing the lineup we played some club gigs in early 2014. During our record sessions for our Demo EP,  which was released on October 22nd  2014, we splitted from our bass player „Hellum“, so the present lineup of MORTHUS is „Kharon  Phormeus Inferorum“ on vocals, „Krypoth“ on drums, „Hrafnagud“ on Rhythm Guitar and me,  „Asgharoth Morthus Diaboli“ on Lead Guitar. For Shows we use a live bassist, this is at present „Flo“ from the Melodic Death Metal Band „Dubiosis“. We play Blackened Melodic Death Metal (some people say it is Melodic Black Metal) in the style of swedish genre icons like Dissection, Dark Funeral or Naglfar and in this years fall we will release our first Album, which, we think, will blow you away.

2.In October you had released a new ep, how would you describe the musical sound that is presented on the recording?
Our style is very hard influenced by swedish Black Metal. Especially Bands like Dark Funeral, Naglfar and the „holy“ Dissection are the inspirations for writing our stuff. So, all the songs on our  EP „Into Oblivion“, have a swedish touch, without sounding the same like the origins. Everyone  who likes the swedish Black Metal sound should give this EP a chance and listen to it, and of course MORTHUS.

3.What are some of the lyrical topics and subjects the band explores with the music?
The lyrics are about the dark lord and all the other dark subjects, like the black depths of human  mind or the ridiculous christianity. We take all typical Black Metal lyric themes and try to get more deep in it. So in the end, the lyrics are alle about death, darkness and occult and mythologic stuff.

4.What is the meaning and inspiration behind the name 'Morthus'?
To be honest, there is no special meaning or something else behind the name. In the beginning we came across that we need a short and catchy namefor our band, so we took MORTHUS.  At this time, there was no other band out there with this name, so we have chosen this one. Sounds cool and stays in mind, thats all.

5.What are some of the best shows that the band has played so far and also how would you describe your stage performance?
The best show we played so far was in October 2014 in the „Clubhouse“ in Saalfeld/Germany together with „Aeons Confer“ (Hamburg/Germany). Perfect Organisation and through and through professional people there at the „Saalfelder Metal Stammtisch“. Great Sound and a really enthusiastic crowd made this evening to something special. Our stage performance is full of energy as well as the crowd in the front is. We try to transfer the  energy we feel on stage to the people in front of us, so they can have a great evening too.

6.Do you have any touring or show plans for the future?
In 2015 we have no touring plans, because our plans for this years are to work on and to become more
known in the scene and maybe not only in Germany. Also we wanna record our first full length album in fall this year, so maybe we plan a tour for 2016. But some Shows we will play of course for the upcoming months. The next one will be on may, 30th at „Death Sentences“ together with „Arroganz“, „Fantoft“ and „Cold Palace“.

7.Currently you are unsigned, are you looking for a label or have received any interest?
Yeah, thats right, currently we have no record label.. In february 2015 we received an offer by the spanish label „Art Gates Records“. They were interested to work together with us in the future. After the first talks were positive, they said that they will send us the contract, and that was the last sign we heard from them. We never saw a contract or something else. So maybe we will search a label in fall this year where we can release our debut-album. If no label is interested in us and our music, thats no problem, we can release the album, as well as our Demo EP, as a self-release.

8.On a worldwide level how has the feedback been to your music by fans of black and death metal?
The reactions or reviews we received so far were through and through extremely positive. We received feedback from countries like Spain, Hungary, Romania, Sweden, Norway, Egypt, the south american area and from the United States too. No matter if this were single persons, magazines or webzines, all were highly positive, so maybe this could be a good start for a worldwide fanbase :-)

9.When can we expect a full length album and also where do you see the band heading into musically during the future?
We will enter the „Nautilus Studio“ in Gera/Germany at the end of may this year. There we also recorded our Demo EP „Into Oblivion“. Our decision to do this is quite simple, the sound of our Demo. Florian Rahm from Nautilus is truely a master. If our plans are right we can release this album in fall 2015. We all are sure, that this album will defnitly get some attention. And what come after that, you never know...

10.What are some of the bands or musical styles that have had an influence on your music and also what are you listening to nowadays?
Our influences are very clear, as you can hear on our EP. These are definitely bands which play the socalled swedish Black Metal, and there especially bands like Dissection, Naglfar and Dark Funeral. These masters of melodies and dark atmospheres are the main influences for the style of our songs. Of course there are other bands too which we listen to or which also have influenced us. Just to name a few, these bands are Children of Bodom, Dimmu Borgir, Slayer, Der Weg einer Freiheit, Immortal, Negator, Gorgoroth or Nile.

11.What are some of your non musical interests?
Of course everyone of us has some interests, which are out of the musical stuff, although it is hard to find space between our musical duties and our regular jobs we have as well. Kharon for exampleis programming a little computer game at the moment, something with rogues and dungeons and stuff like that, pretty awesome results so far. Krypoth trains in a fitness studio, he is very heading into a fitness freak, and Hrafnagud and I, we like movies and computer games, although I for myself try not to waste too much time with that, because this time I can also spend in writing new Morthus stuff, and thats the most important fact
for me.

12.Before we wrap up this interview, do you have any final words or thoughts?
We thank you for the opportunity to talk to you and for the opportunity to introduce our music in the United States. I hope sometimes we can do a show there. Also we want to thank our most important partner in the business so far, Markus Eck from MetalMessage, who helps us with all the promotional stuff, and he is doing really great. An awesome guy. Further we thank all our fans and families, who are standing behind us at every time, so we could reach this point where we are at the moment. And to the people in the States I wanna say, listen to Morthus, like us, share us or just enjoy. Raise your fist and Horns up to every Metal fan in the United States!!!!

Posted by OccultBlackMetal at 9:32 PM