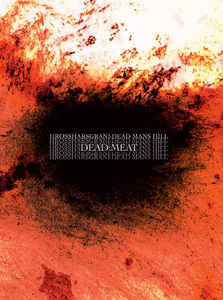 This is a review of a split album between Hrosshargrani from Austria who has had a full length reviewed before in this zine and Dead Man's Hill from Belguim, the album is called "Dead Meat" and was released by Steinklang during the year of 2010, we are going to start of the review with Hrosshargrani.

Hrosshargrani are a band from Sweden that mixes martial industrial with dark ambient, noise and black metal.

Drum programming is mostly slow beats that get a little bit fast at times with some blast beats, while the noise effects sound dark and evil, as for the guitars they are very distorted sounding leads with some acoustic guitars being used on occasion.

Keyboards are very dark and epic sounding giving the music a ritualistic feel, while the vocals alternate between deep growls, clean singing male and female vocals and spoken word passages, while the lyrics are written in a mixture of German and English pagan orientated with some references to Romanian history, as for the production it sounds very dark and epic sounding.

In my opinion the songs that put out on this split are a lot better and darker then the previous full length that was reviewed. RECOMMENDED TRACKS INCLUDE "Countess Bathory" and "Down There".

Dead Man's Hill are a band from Belgium that plays a very dark form of death industrial mixed in with a lot of ritual elements, neo classical and folk and now we are going to review their music.

Drum programming is all slow and militant, while the synths are very dark and evil sounding, as for the noise effects they are very loud and avant garde sounding.

Vocals use some deep growls along with a mixture of clean singing male and female vocals, with a small amount of heavy industrial guitars that make the music sound very evil.

Lyrics touch on the destruction of the world, Occultism, nature and Voodoo, while the production sounds very dark, powerful, epic and evil sounding.

In my opinion while Dead man's Hill are not black metal influenced they have the best and darkest music on this split. RECOMMENDED TRACKS INCLUDE "The Dangerous Emptiness" and "All Saints Day Rituals: To Baron Samedi". RECOMMENDED BUY.

https://steinklangindustries.bandcamp.com/album/skd26-hrossharsgrani-dead-mans-hill-dead-meat-2010
Posted by OccultBlackMetal at 5:04 PM