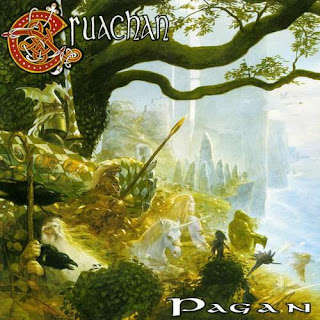 Cruachan are a pagan/folk metal band from Ireland and this is a review of their 2004 album "Pagan" which was released by Candlelight U.S.A.

Drums are mostly mid paced beats with some percussion being used at times while the flute gives the music an Irish folk music feel, and there a lot of different instruments being used on this album such as bouzouki, Mandolin, Banjo, Cello, uillean pipes, fiddle and the Bodhran which brings out of the feel of being at an Irish festival drinking a Guinness.

Keyboards when they are utilized give the music an atmospheric feel while the bass playing is all rhythm bass that follows the riffs coming out of the guitars with a very powerful and dark sound.

Rhythm guitars use a lot of heavy riffs that are influenced by both death metal and black metal with a lot of melody being utilized and some thrash riffing, there is not a lot of lead guitars being used on this recording, as for the acoustic guitars when they are used utilize a lot of open chords and is used more as a background.

Male vocals are mostly high pitched black metal screams with some deep death metal growls as well as some cleaning, while the female vocals are clean sung with a lot of melody and a folk music feel, as for the lyrics they cover Irish paganism, with some other topics being discussed such as folklore, Lord Of The Rings trilogy, The war between the British army and fighting vikings, as for the production on this recording which was recorded and mixed in Sonic Studios in Dublin, Ireland during 1993 sounds very professional and you can hear all of the instruments.

In my opinion Cruachan are a very talented band and if you are a fan of folk metal you probably have already heard this band. RECOMMENDED TRACKS INCLUDE "Pagan" "Some Say The Devil Is Dead" and "Erinsong". RECOMMENDED BUY>

Posted by OccultBlackMetal at 3:03 PM